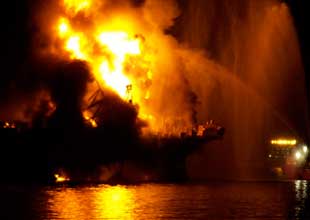 The Obama administration misled the public about the size of BP’s spill and misrepresented a report about how much oil remained in the Gulf following clean-up efforts, according to one of four staff reports released today by the National Oil Spill Commission, the panel convened by the President to investigate the disaster. According to the report, the White House also deliberately kept a worst-case scenario estimate under wraps, despite a federal agency’s request to make the information public.

Initially, BP claimed that 1,000 barrels oil per day were leaking from the well, an estimate the administration adopted. But, according to the report (“The Amount and Fate of the Oil”), “Neither the Coast Guard nor BP divulged the data or methodology behind this estimate. Based on the information we have to date, it appears the figure came from BP without supporting documentation.”

When the administration revised its estimate to 5,000 barrels per day a week after the spill, it again provided the public with dubious information. The report indicates that the number was basically made up. The figure came from a scientist at the National Oceanic and Atmospheric Administration (NOAA) who had no experience making this kind of estimate, used “imprecise” methodology, and did not rely on established or peer-reviewed methods. From the report:

This is not a criticism of the scientist, who made clear his assumptions and that the 5,000 bbls/day figure was a “very rough estimate.” His stated intent in disseminating the estimate was to warn government officials that the flow rate was multiple times greater than 1,000 bbls/day.

Despite the acknowledged inaccuracies of the NOAA scientist’s estimate, and despite the existence of other and potentially better methodologies for visually assessing flow rate (discussed below), 5,000 bbls/day was to remain the government’s official flow-rate estimate for a full month, until May 27, 2010.

The 5,000 barrels estimate would prove to be only one-twelfth of the actual rate of flow from the well. Meanwhile, government responders were aware that BP had listed a 162,000-barrels-per-day “worst-case scenario” estimate in its original drilling permit. According to officials interviewed by commission staff, NOAA wanted to make that information public in late April or early May, but the White House Office of Management and Budget quashed the agency’s request.

The administration’s claims about the flow rate from the well and its oil budget report, touted as describing the “fate of the oil” in the Gulf, “were the source of significant controversy, which undermined public confidence in the federal government’s response to the spill,” the report also notes, concluding that it was “not an incidental public relations problem.”

The absence of trust fuels public fears, and those fears in turn can cause major harm, whether because the public loses confidence in the federal government’s assurances that beaches or seafood are safe, or because the government’s lack of credibility makes it harder to build relationships with state and local officials, as well as community leaders, that are necessary for effective response actions.

The spill commission’s report states that the administration’s oil budget report, released on August 4, was intended to be an “operational tool” for responders, but administration officials promoted it as an official estimate and “obscured some important shortcomings” in the report. For instance, it claimed the oil was “biodegrading quickly” but did not provide sources or data to support that conclusion, or even define what “quickly” meant in this context. The purpose of the budget, the commission’s report states, “was to tell responders how much oil was present for clean-up operations, not to tell the public how much oil was still in Gulf waters.” The report faults White House energy and climate adviser Carol Browner for presenting the budget “as a scientific assessment of how much of the oil was ‘gone’,” when it did not support her claims.

The report also notes that false statements by administration officials that the oil budget was “peer-reviewed” “likely contributed to public perception of the budget’s findings as more exact and complete than the budget, as an operational tool, was designed to be.”

Based on interviews with personnel who worked on the spill response, the commission’s report is preliminary and has yet to be fully endorsed by the commission’s members. The commission also released staff reports today on the use of dispersants in response to the spill, decision-making in the Unified Command, the history of offshore drilling, and the implications of drilling in the Arctic.

I’ll have more on the commission’s report on dispersants shortly.