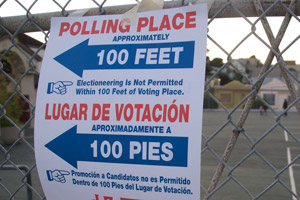 Playing off right-wing fears of rampant voter fraud, conservative groups are exhorting activists to film and photograph unseemly activity at the polls, question voters’ citizenship, and follow suspect vehicles to keep the election from being stolen. Voting rights advocates now worry that such instructions—which are at the heart of the right’s expansive poll-watching campaign—could encourage harmful and possibly illegal activity.

In Minnesota, for example, the tea party-backed Election Integrity Watch has issued guidelines for its volunteer poll watchers that push the envelope of what’s permitted under state election law, raising concerns that activists could end up violating voters’ rights—intentionally or not. As part of its statewide anti-fraud effort, the Election Integrity Watch is offering a $500 bounty for tips leading to the successful prosecution of election fraudsters, posting detailed instructions for its “fraud spotters” online. Backed by the North Star Tea Party, along with conservative groups Minnesota Majority and the Minnesota Voter Alliance, the campaign encourages its “fraud spotters” to take photos and video of election crimes that they see happening at the polls. “If practical, bring a camera to your polling place. Most mobile phones are capable of taking still pictures and video,” the project advises.

Though there’s no state or federal law strictly prohibiting people from using cameras to document their own voting experiences, the Minnesota Secretary of State says that it “strongly discourages voters from using cameras or video recorders” at the polls, according to a statement posted by the Citizen Media Law Project. “Voters have a right to privacy…[which] could be compromised by picture or video. In addition, other voters’ objections to being photographed could lead to disruptions within the polling place,” a Minnesota election official says in the statement. Voting rights advocates point out that such behavior could end up also “creating an atmosphere of intimidation and targeting persons of color,” says Keesha Gaskins, executive director of the League of Women Voters in Minnesota. “We are very concerned about the guidelines they’ve put out.”

Other conservative groups are issuing similar surveillance instructions that could prompt activists to step over the line. Pajamas Media has launched a nationwide campaign to recruit poll watchers to film and photograph “cases of voter fraud, intimidation, or other voting malfeasances they may encounter,” the conservative site says, promising to promote the evidence online. A coordinator for ResistNet, a popular tea party networking hub, also urges activists to film suspicious groups of voters. “Small, very discreet cameras are now available and are inexpensive,” advises Darla Dawald, ResistNet’s national director. “They can be concealed on the mirror of cars or in bushes.”

In fact, the conservative activists behind Election Integrity Watch acknowledge that such tactics could run afoul of election rules. But they suggest that such a violation is worth the risk if there’s the potential of rooting out acts of electoral skullduggery. “We specifically instruct fraud spotters not to photograph ballots, or people in the act of voting, but if they can capture fraud going on and photos or videos are the only way to identify the perpetrators, we think taking a picture or video is in order,” says Dan McGrath, spokesman for Minnesota Majority, one of the conservative advocacy groups backing the effort. Similarly, ResistNet admits that such tactics could be illegal but slyly suggests how activists might be able to skirt the rules: “It is illegal to video the polling place, but you can video the birds on top of the polling place or the dog sitting in front of it. If your video of birds or dogs happens to include voter vans, well… “

Election Integrity Watch has issued similarly ambiguous advice by advising poll watchers to be on the lookout for “non-citizen voters” who try to register to vote on Election Day, which is permitted in Minnesota. In a section entitled “What to Watch,” the guidelines point out that non-citizens who are legal immigrants carry driver’s licenses with a “status check” notation, along with the visa expiration date—and are “therefore not eligible to vote in Minnesota.” ResistNet also advises poll watchers to be on the look for “illegals…[who] go from precinct to precinct and back again voting as often as they can in one day.” Paranoia about such scenarios has proliferated among conservative activists, who contend that immigrants—along with union thugs, the New Black Panthers, and every other liberal boogeyman—will try to steal the election.

The problem, advocates say, is that trying to verify someone’s citizenship could easily end up infringing on a person’s right to vote without interference or obstruction. “It’s unclear how a person could actually get that information without entering into the voter’s personal space and actually approach voters,” says Gaskins, noting that only election officials and poll challengers—whom election boards authorize to raise red flags—are allowed to approach voters at polling stations. “It’s inconsistent with people just being observant—it seems much more confrontational and frankly stronger than what most states will allow their challengers,” says Wendy Weiser, deputy director at the Brennan Center for Justice.

The Minnesota anti-fraud campaign maintains that fraud spotters have been explicitly prohibited from approaching voters. “There are many ways an informed fraud spotters can detect fraud without talking to voters,” says McGrath, explaining that poll watchers can simply “observe something while waiting in line” while they’re going to vote themselves.

But both voting rights advocates and Democratic officials worry that the hysteria that’s fueling such anti-fraud campaigns could encourage activists to overstep the bounds. Already, the Department of Justice is investigating allegations of voter intimidation in Texas, with reports that poll watchers were “looming over” voters and “getting in their faces” during early voting this week, according to media accounts. And there are concerns that the tactics that Election Integrity Watch is pushing—following suspicious-looking buses without being noticed and watching groups of people being led into a polling place to register to vote—could lead to similar problems.

Though there are concerns about voter intimidation nationwide, Minnesota could become ground zero for a showdown given the tensions that are still lingering from the Al Franken-Norm Coleman Senate recount in 2009. Earlier this year, Minnesota Majority released a report alleging that hundreds of felons had voted in the Franken-Coleman election. Ultimately, only three felons were charged with voting illegally, but this was enough to vindicate conservative activists—and rile them up to fight fraud in 2010. “Minnesota’s not a foregone conclusion for either party—when there’s the threat of a closer race, sometimes people engage in tactics…that are voter suppressive,” says Gaskins.

In response to the voter fraud hysteria, voting rights advocates and Democratic officials in Minnesota and elsewhere are planning their own “voter protection” efforts, alerting vulnerable groups to tactics that poll watchers and others might use to intimidate or suppress voters. “We have an offensive strategy—educating voters and constituency groups about the forms you need to bring, what people can ask and can’t ask of you, basic voting rights,” says Pakou Hang, election protection director for Minnesota’s Democratic Party. The party is also planning to station legal teams to respond to complaints of voter intimidation or harassment at the polls. Independent groups like the Lawyers Committee for Civil Rights are executing similar efforts on a national level.

But that may not be enough. On Election Day, the officials most immediately responsible for dealing with any potential problems are the poll workers who administer the elections at local polling stations. Recognizing this, conservative groups and the GOP have made a big push to recruit activists to fill these slots as well.

Though groups like the Election Integrity Watch have whipped up voter fraud fears, McGrath says his organization and others engaged in similar efforts bear no responsibility for any potential wrongdoing by poll watchers and workers on Election Day. “There may well be some people who go off the books, but that’s going to happen whether we’re there or not,” he says.