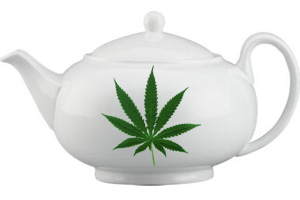 Last month in the nation’s capital, Gary Johnson, a former governor of New Mexico and outspoken critic of big government, took the podium at Glenn Beck’s 9/12 rally to talk up economic issues. He warmed up the crowd of tea partiers with tales of how he’d fended off unnecessary state spending through liberal use of the veto stamp, and how he’d boosted educational competition through charter schools. Then Johnson dropped a bomb. “Half of what we spend on law enforcement, the courts, and the prisons is drug related,” he proclaimed. “I suggest that legalizing marijuana will make this country a better place.”

The crowd erupted in a clash of boos and applause—evidence, Johnson told me later, that the tea party is ripe for debate on the issue. “What the tea party talks about is wise spending,” he said, adding that the war on drugs was certainly no better a deal than Social Security or Medicare. The tea party’s libertarian elements, he noted, have already led to the unthinkable: “You find more Republican candidates right now espousing legalization of marijuana than you do Democrats.”

He’s probably right, says Allen St. Pierre, head of the pro-legalization National Organization for the Reform of Marijuana Laws (NORML), which funnels 80 percent of its political donations to Democrats. “Republicans are definitely more on the record in terms of support for ending prohibition,” he says. While pot-friendly pols from either side of the aisle are still rare species, the GOP variety tends to voice unequivocal support for outright legalization. Republican exemplars include ex-Colorado GOP congressman Tom Tancredo (now running for governor on the American Constitution Party ticket) and the GOP challengers to Reps. Barney Frank and Nancy Pelosi. Nobody, of course, is more outspoken on the issue than Rep. Ron Paul (R-Texas), the 2008 presidential hopeful and tea party patron saint, who recently wrote that “decriminalizing marijuana at the federal level would be a start” to ending “the insanity of the War on Drugs.”

GOP voters might prove receptive to such a message. According to the Pew Research Center, a whopping 61 percent of Republicans support legalizing the drug for medical patients (as 14 states already have). In a recent Gallup poll, nearly one-third favored legalizing pot outright. In California, pollsters have shown similar levels of Republican support for Proposition 19, the ballot initiative that would legalize, regulate, and tax recreational marijuana for adults.

While Democrats favor Prop 19 at twice the rate of Republicans, pot activists insist that the tea party world is helping to narrow the gap. Yes on 19 field director James Rigdon, who sends canvassers to most of the state’s tea party rallies, believes that “individual tea party members are absolutely on board.” Case in point: During Ron Paul’s September 4 San Francisco visit, Rigdon’s canvassers signed up 10 new volunteers.

Advocates of marijuana legalization have found major allies on the Right since at least the early 1970s, when Richard Cowan, a past president of the Yale Young Republicans, wrote a National Review cover story that proclaimed, “The Time Has Come: Abolish the Pot Laws.” (Cowan later served as national director of NORML.) “Tea party rhetoric is very heavily oriented towards the Founding Fathers,” who were much friendlier toward the marijuana plant than today’s federal government, Cowan told me. “Washington and Jefferson grew hemp!”

Hemp legalization, in fact, has been an obsession for Take Back Kentucky, a tea party umbrella group that was an important early backer of Paul’s son, Rand Paul—now the state’s GOP nominee for US Senate. At a meeting I attended in August, the group’s founder, Norman Davis, pointed out that hemp was used to make the first American flags, World War II-era military supplies, and modern auto parts.

Giving a new crop to farmers wasn’t his only concern: “Law enforcement tells us that we’ve got to build a huge prison industry to stop marijuana. What a waste of money!” Davis said. And though Rand Paul has broken with his father to say that marijuana should remain illegal, he’s advocated cuts in federal drug-enforcement spending—a position his Democratic opponent is using to suggest that Paul is soft on drugs and crime.

Fear of that label is one reason top California Democrats—including Sens. Dianne Feinstein and Barbara Boxer and gubernatorial candidate Jerry Brown—came out hard and early against Prop 19. In contrast, some Republicans seemed more concerned about softening their party’s “just say no” image—Gov. Arnold Schwarzenegger, who waited until last week to formally oppose Prop 19, yesterday signed a bill that will downgrade possession of an ounce or less of marijuana from a misdemeanor to an infraction akin to a traffic ticket. Even Sarah Palin came out sounding like a moderate. “If somebody’s gonna smoke a joint in their house and not do anybody else any harm,” she said in June on Fox’s Freedom Watch, “then perhaps there are other things our cops should be looking at to engage in, and try to clean up some of the other problems that we have in society.”

In recent years, some of the GOP’s most powerful think tanks and interest groups have tentatively joined hands with pot smokers. In 2005, Americans for Tax Reform head honcho Grover Norquist submitted a letter in support of a lawsuit challenging a university lab’s federally granted monopoly on pot production for research purposes on the grounds that it was anti-competitive. In 2009, a lawyer with the National Rifle Association signed on as co-counsel in a NORML case challenging a federal policy that bans the sale of guns to medical marijuana patients. And St. Pierre says that most of the speakers at the American Enterprise Institute’s 2009 conference on drug policy favored legalization.

“The first thing that would happen” if California legalized pot “would be that we as taxpayers would literally save $1 billion that we now spend in a futile effort to eradicate marijuana as well as to prosecute and incarcerate nonviolent marijuana users,” says Republican Jim Gray, a retired California Superior Court judge, Prop 19 backer, and author of the 2001 book Why Our Drug Laws Have Failed and What We Can Do About It. A just-released Cato Institute study (PDF) estimates that legalizing all drugs nationwide would save $41.3 billion in government expenditures and generate $46.7 billion in new taxes every year.

Libertarian thought motivates some of the legalization movement’s biggest names, such as Richard Lee, architect of Prop 19 and founder of Oaksterdam University, a cannabis-cultivation school in Oakland, California. Lee grew up in a Republican household in Houston, and ran for the Texas statehouse on the Libertarian Party ticket in 1994 (he got 437 votes). He recently brought his mother, a Harris County Republican Precinct Chair and legalization supporter, to California to help him campaign. Ending pot prohibition “should be a Republican or conservative issue,” he told me. “It is less government and more personal responsibility.”

Ultimately, though, support from Prop 19 may have less to do with ideology than frustration over the sluggish economy. Legalizing and taxing pot, according to the California State Board of Equalization, could create up to $1.4 billion in new tax revenues—no chump change for a state facing draconian cuts to education and government services.

As it stands, the statewide explosion of semi-legal medical marijuana businesses has spawned terms like “cannabusiness” and “ganjapreneurs.” Rigdon, the Prop 19 field organizer, makes his pitch to tea partiers this way: “We have a chance to grow it in America, sell it in America, and help Americans with American jobs.”