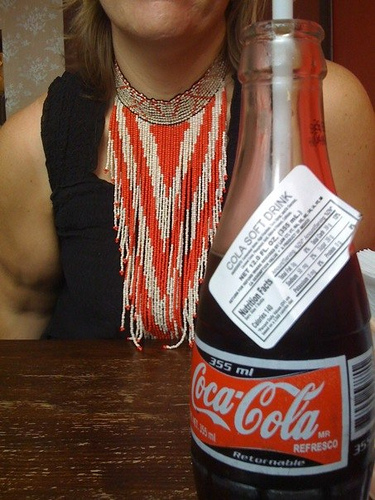 If you haven’t heard, there’s a craze for Mexican Coke that’s only getting stronger. The drink has more than 30,000 fans on Facebook, and demand is such that there’s even a web site to help those looking for the sweet drink, WhereToFindMexicanCoke.com. Part of the appeal may be the drink’s retro-style glass bottle, but many claim it just tastes better because it’s sweetened with cane sugar: Coke in the US uses high-fructose corn syrup. So why must we import this delicious treat from south of the border, instead of getting it from our own American factories? This week, Consumerist tried to answer this question, but all Coca-Cola would tell them is that they don’t plan on introducing a non-HFCS version of Coke in the US anytime soon because we already have a sugar-based version: Mexican Coke. Also, the rep claimed that in taste tests, Coca-Cola found that consumers detected “no perceptible taste difference” between HCFS Coke and cane Coke.

There are a few key reasons Coke should consider introducing a sugar cane-based US version, and not just because 89% of Consumerist readers said they’d buy it. Firstly, it would reduce the carbon emissions from shipping those heavy glass bottles all the way from Mexico. Glass is much heavier than aluminum (though readily recyclable) so trucking it any distance is a considerable hit to the environment. Secondly, Coca-Cola reps have repeatedly said that Mexican Coke is a taste of home for Mexican and Latino immigrants. If it’s such a homestyle taste, why not capture that fast-growing market by making the same product in the US?

The growing taste of Americans for Mexican Coke did get me thinking about the environmental costs of HCFS vs. sugar cane. Sugar cane is no balm to the environment, but neither is corn. Sugar cane requires a lot of water, but corn needs more fertilizer. Corn has more sugar per ounce, but sugar cane can be planted more densely. Regarding land use, an Australian study found that, as mentioned in Slate, “a single acre can produce about 5.4 tons of sugar from sugar cane versus 3.4 tons from sugar beets and only 2.5 tons from corn.” An added plus for sugar cane: its waste can be used as fuel, meaning production machinery can be run on it, reducing outside power and fuel requirements. Do people know (or care) about all this as they sip their sugary Mexican Cokes? Probably not. But it’s too bad because it might make that sip all the sweeter.