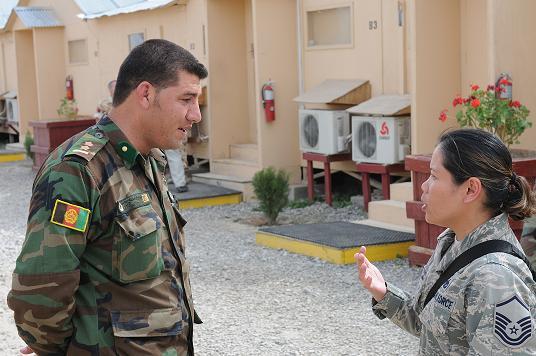 This week Gen. David Petraeus’s latest “advancing to the rear” war tactic takes effect. As of Monday, all US troops stationed in Afghanistan will now need to demonstrate some proficiency in Dari, a Persian-based dialect spoken by half the Afghan population.

Too bad soldiers and military experts don’t share his enthusiasm. “Luckily, none of the Taliban or the communities they control speak Pashto, Urdu, Punjabi, or Arabic. Learning those would be silly,” says Joshua Foust, an Afghanistan researcher and writer for PBS’s Need to Know.

Foust has a point. The original Afghan Taliban speak Pashto, the language of the Pashtun ethnic group that straddles the border with Pakistan. By the CIA’s own estimation, half of Afghans speak one of thirtysomething languages other than Dari. Critical shortages of Afghan language experts have plagued post-9/11 US military efforts. Even when officers host local “shuras” with tribal leaders to generate face-to-face goodwill with Afghan civilians, firsthand videos—like Sebastian Junger‘s and Tim Hetherington’s Restrepo—show the futility get-togethers can be useless. “[It’s] immediately obvious, from the language barrier, to the total opposition of priorities, to the relentless references to former squad leaders whose approach to community relations left much to be desired,” writes one reviewer of Restrepo. (Having seen the film, and similar local council powwows in Iraq, I won’t disagree.)

Not only that, the nature of military bureaucracy means FRAGO 10-32 will probably amount to nothing. Fragmentary orders are on-the-fly commands issued as updates to standing military policies in a given war theater. In a theater as fast-changing and unfavorable as Afghanistan, such orders are as abundant as flies on a far—and about as powerful, too. “You know how many FRAGOs are out there? And how many are ignored?” tweets Captain Crispin Burke, an Army pilot who writes extensively on counterinsurgency.

So what gives with Petraeus’ order? Is it simply sheer optimism? Maybe not. Some reports indicate that the general is trying to set the groundwork for a US withdrawal by shoring up security in major centers like Kabul and Kandahar, and ceding much of the territory that’s already held by the Taliban and other anti-NATO elements. Those disputed territories are generally in regions where Dari won’t get you very far, but GIs might find Dari for Beginners more useful in the populated areas that they’ll be reinforcing: It’s the lingua franca for most political communication in the country.

That’s not losing, maybe, but it’s definitely advancing to the rear. And as a strategy, it doesn’t inspire great confidence even among military officers. As one NATO soldier told the New York Times recently, if the Taliban makes a big comeback in populated areas, “Then we’ll know that it didn’t work.”