Climate hawks are floundering after this year’s election. A climate bill couldn’t get through Congress even when it was controlled by the Democrats, thanks to Senate dysfunction and general idiocy. Now, with the GOP and Tea Party ascendant, the chances of passing curbs on greenhouse gases anytime soon are zip to zilch.

So what now, the hawks are wondering?

For the moment, forget about carbon caps and start thinking about cervical caps—and the Pill, IUDs, and Depo-Provera.

Next week, a panel of experts will start meeting to determine whether health insurers should be required to cover the full cost of contraceptives. At issue is whether birth control is “preventive” medicine, which the new health-care law requires insurers to cover free of charge, without co-pays. The Department of Health and Human Services is supposed to make a final call on that question in August 2011.

Sounds like a no-brainer, but ultra-right-wing groups like the US Conference of Catholic Bishops and the Family Research Council are rallying in opposition, and they may have more allies in the newly conservatized Congress.

You might think birth control is already so prevalent in the US that covering it fully under insurance wouldn’t make a difference. But you’d be wrong. Consider, for starters, that about half of all pregnancies in the US are unplanned; that leaves a lot of room for improvement.

Cost can be a real deterrent to contraceptive use, even among women with health insurance, as the co-pays tend to cost $10 to $50 a month. Thirty-four percent of women voters have struggled with the cost of prescription birth control, according to a recent poll conducted for Planned Parenthood. And a survey [PDF] conducted last year for the Guttmacher Institute found that 8 percent of American women sometimes didn’t use birth control in order to save money; that includes 18 percent of women on the Pill who used it inconsistently in order to reduce costs.

Even beyond the prospect of reducing CO2 emissions, there are great reasons for climate hawks to get involved in this fight. Stepping out of the climate/energy silo would help them forge alliances and generate goodwill with other progressive groups. Unlike conservatives, who are great at sticking together and pushing an overarching narrative, the left tends to splinter into little interest groups that don’t rally to support each other’s causes. Here’s one way to start changing that dynamic. 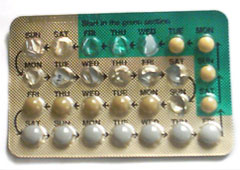 This stuff’s pricey. Can’t you lend a hand?

And this issue is a clear political winner. Eighty-eight percent of American voters support women’s access to contraception, according to a 2009 poll conducted by the National Family Planning and Reproductive Health Association. That includes 80 percent of Republicans and 80 percent of self-identified “pro-lifers.”

And on the specific question of insurance company coverage, the numbers are almost as high: 71 percent of American voters believe insurers should be required to fully cover prescription contraception, according to a Planned Parenthood poll, including 72 percent of Republican women and 77 percent of Catholic women (no matter what their bishops say).

Planned Parenthood is making a big push on this issue, along with other groups focused on women’s issues and reproductive health. Climate hawks should step outside their comfort zone and get on board.