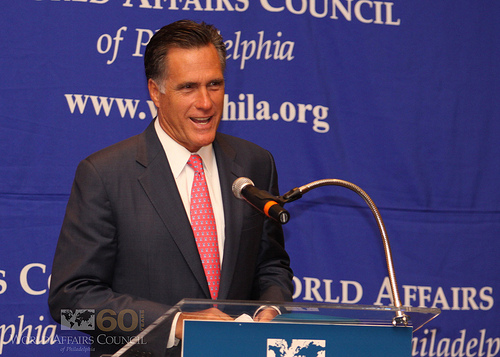 While top Democratic donors meet in Washington this week to start planning their 2012 election strategy, the Republican Party’s presidential hopefuls have already begun filling their war chests with donations galore. As the New York Times reported Friday, GOP frontrunners including Mitt Romney and Minnesota governor Tim Pawlenty are using various political action committees registered at the state level to drum up cash for their early presidential nomination bids. These pre-campaign PACs are formed at the state level where donation limits are often more lax than at the federal level.

Pawlenty, for instance, pulled in $60,000 from GOP donor Bob Perry in September, the Times reported; had the donation gone to a federal PAC, campaign finance laws would’ve limited Perry’s gift to $5,000. Romney has set up state-level branches of his federal PAC in places like Michigan, Iowa, New Hampshire, and South Carolina—all of which are bellwether states in presidential elections. Here’s the Times‘ Michael Luo laying out the 2012 spending wars on the GOP side so far:

Mr. Romney has been by far the most assertive, according to interviews with a half-dozen top Republican fund-raisers, already pushing for commitments from major donors should he formally decide to run.

Over the summer, Mr. Romney, the former Massachusetts governor, invited top bundlers of campaign checks from key states to his vacation home in New Hampshire on several occasions to help firm up their commitments. Mr. Romney has already lined up an array of prominent supporters, including a billionaire, David Koch, who has donated heavily to conservative causes over the years, and Robert Wood Johnson IV, the billionaire owner of the New York Jets and one of the party’s most coveted fund-raisers.

Mr. Pawlenty has also been putting together a financial apparatus. On Monday and Tuesday evening, for instance, he met with top fund-raisers who flew to Minneapolis to listen to a briefing on his record as governor. Those were the latest in a series of such meetings that began in September, according to William Strong, a vice chairman at Morgan Stanley who has spearheaded fund-raising for Mr. Pawlenty’s political action committee, Freedom First.

Over the last year, Mr. Pawlenty has been methodically courting fund-raisers in get-acquainted, “friend-raiser” sessions and is now moving to deepen those relationships with a potential eye on 2012, Mr. Strong said.

Potential GOP candidates lagging behind include Sarah Palin, who’s raised considerable funds through Sarah PAC, a federally-registered fund, but not much from larger donors. Mike Huckabee as well trails Romney and Pawlenty by a substantial margin in the money race.

So what’s to make of this early wooing of fundraisers by top GOPers? Are people committing to individual candidates this early in the presidential campaign (which to say, before it’s really begun)? In answering these questions, it’s worth bearing in mind what one Washington lobbyist and Republican fundraiser told the Times: “People are shopping. People aren’t buying yet.”