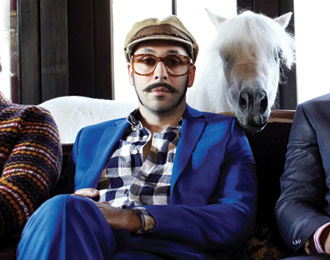 OK Go is a dapper pop-rock foursome, and singer/bassist Tim Nordwind is quite possibly the dapperest of the bunch. Admittedly, I’m only saying this based on Nordwind’s awesome last name, stylin’ togs, and prominent sideburns evident in the band’s inspired videos—which have made it a YouTube sensation. OK Go’s fame began with the backyard-dance-routine video “A Million Ways” and took off with their so-called treadmill video, which you may well have seen—you and at least 60 million others. Then came the astounding Rube Goldberg machine. The band’s latest hit is “White Knuckles,” a video they no doubt concocted to get a share of the millions of people who search YouTube late at night for videos involving dogs. Their brand new one, posted just last week, is a more artsy affair called “Last Leaf,” involving stop-time animation and thousands of slices of toast. Singer/guitarist Damian Kulash—whose sister’s choreography has been instrumental in OK Go’s success, answered our questions about the making of the videos that have brought so much short-term pleasure to so many. In the meantime, I asked Nordwind about the music that inspires his creative mind.

Tim Nordwind: Sleigh Bells, Treats. It’s as if they put a tape recorder in the brain of a three-year-old kid, and then wrote a bunch of songs around the constant bombast of the kid’s hyperactive, sugar-blown imagination. It’s definitely a record to blast out loud.

TN: Definitely good: Bob Marley, “The Lord Will Make a Way Somehow.” It’s one of those songs that scratches the itch in my brain so satisfyingly. It’s a lo-fi early Marley tune that captures his beautiful, laid-back vocal delivery. And the band plays like they’re all just relaxing in the sun, poppin’ out feel-good songs because it’s what they do.

TN: I don’t really feel guilty about the things I like. One song I just couldn’t stop listening to this year was Jason Derulo’s “Whatcha Say.” I think mostly because he very wisely sampled the absolutely beautiful song by Imogene Heap, “Hide and Seek.”

TN: “Santa Claus is Coming To Town,” performed by The Jackson 5

TN: Fugazi’s Repeater + 3 Songs, which I listened to on repeat over and over again as a teenager.

MJ: What’s a new album you dig from completely outside your genre?

TN: I’m excited for Cee-Lo Green’s Lady Killer. [Editor’s note: It just hit the streets last week.] I heard his first single “Fuck You,” which is a great Motown ’60s throwback that really nails the experience of seeing an ex-girlfriend with her new boyfriend. There’s really only one thing you want to say at that dreaded moment, and Cee-Lo does it perfectly.