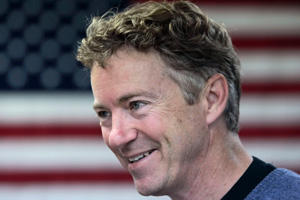 Tea party Republican candidate Rand Paul has won the Kentucky US Senate race. Throughout the campaign, Democrat Jack Conway occasionally seemed to come almost within striking distance, but ultimately Conway, the state attorney general, was unable to overcome a bad year for Democrats in an increasingly red state. The real nail-biter now is how politically extreme Paul will be once he’s in the Senate.

Even at the end of this obsessively watched campaign, it remains unclear how Paul would legislate—or anti-legislate. Is he a libertarian with tea party tendencies, or a tea partier with libertarian impulses? It’s hard to know, because Paul won this race virtually without talking to media. One of us went to Kentucky to try to get someone—anyone—on the Paul campaign to discuss Paul’s positions on various issues and policies. We didn’t have much luck.

If the hardcore libertarians who support Rand Paul get their way, he’ll act much like his father, Rep. Ron Paul (R-Texas), who is known as “Dr. No” for his practice of voting down almost every spending and tax bill to cross his desk. Ron Paul has referred with pride to the fact that he’s often on the short end of 434-to-1 votes in the House. But when a House member casts a lone nay vote, it doesn’t gain him much except credit with his followers. In the Senate, a single opposition vote—expressed via a hold, a filibuster, or some other parliamentary maneuver—can block legislation and bring the chamber to a standstill. Look at how Sen. Jim Bunning (R-Ky.), whose vacated seat Rand Paul is filling, held up unemployment benefits for millions earlier this year all on his own. In the Senate, Paul—or other incoming tea partiers—could do that again and again, freezing both legislation and appointments. If Rand becomes the “Son of Dr. No” in the Senate, that would further gum up the already dysfunctional chamber and ensure even greater gridlock in Washington.

There is another thing to watch for. If Paul votes in libertarian style like his father on some issues—such as drug policy and the war on terror—he could face the wrath of the tea party conservatives who’ve embraced him. And that’s not all. He must also please the regular, moderate Republicans in Kentucky who backed him because they couldn’t bring themselves to support Conway. These folks aren’t exactly small-government purists. They want fiscal discipline but also some bacon for the state.

It may not be be easy to be Rand Paul. And maybe that’s why it’s fitting that he’s named Rand. Like Ayn Rand’s John Galt character, he could prove too rigid to operate in an ideologically mushy world. But even if he finds it tough to get his bearings in the Senate, Paul is unlikely to follow Galt’s lead and move to an isolated mountain valley and invent a motor that runs on air.