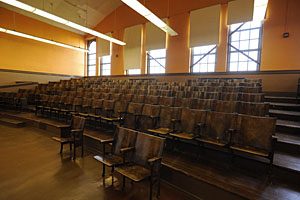 -Mark Murrmann, Mother JonesBy now, you’ve probably either seen or read reactions to the most controversial education documentary of the year, “Waiting for ‘Superman‘” (WFS) directed by Davis Guggenheim. (In case you missed the brouhaha, my favorite in-depth, opposing views on the film are here and here.)

I plan to spend a lot more time in the schools before I dig deeper into some of the claims in the documentary, but I am always skeptical of silver-bullet solutions. Meanwhile, I have been trying to rally some veteran public school teachers to go see WFS with me. So far, I haven’t been able to find one taker. The teachers tell me they think it’s an attack on them, and are boycotting it.

Turns out, Guggenheim also wants to hear from teachers. Last week, he put out a call in the form of a blog post on HuffPo, “Teachers: Tell Me What You Think,” and got an earful. The interesting thing is that out of 87 comments, as of today, not one is positive. (Well, there is one, but that comment is clearly an advertisement.) All comment writers say that they are teachers, some with decades of experience, and there are some important points. I read through all comments, and here are a few excerpts that seemed representative of the main themes and sentiments.

Have you seen “Waiting for ‘Superman?'” Really curious to hear what MoJo readers think of it.

TeacherSabrina–This film was a wasted opportunity. How could you make an entire film about the problems in so-called “failing” schools, and never actually visit or interview anyone within them? And how could you rely on the “expert” analysis of people who have never taught or studied education, let alone tried to understand the issues facing struggling schools? Several of your “experts” are ideologues who are deeply invested in undermining public education.

Fedricka Luvmesumkyle M—Instead of trying to bring people together in solving this complex problem, your film had hindered any possibility of real collegiality among stakeholders.

Keith Homer–I teach at a charter school, but am the first to say that isn’t THE answer by any means. It’s one way out of many to provide an education with failures and successes just like any other education institution, private included. To hold up Charters as the One True Answer to all our problems is naive and uninformed.

Tenn CEB–As a retiree having spent 40 years in education, I’m fairly knowledgeable of education issues. I must say, I could not have believed, without seeing for myself, that so much misinformation and distortion could have been packaged in an hour-and-45-minute presentation. I’ve never viewed a stronger propaganda piece. … Unfortunately, your movie is having a serious impact. I’ve never experienced such hostility toward teachers as I’ve read and seen during the past two months, and much of it is attributed to or associated with WFS.

Plectix— … This assumes that for every deadbeat fired, there is an excellent teacher waiting in the wings to be hired. That’s not the case. Every excellent teacher starts out as a struggling teacher like I was. These struggling teachers must be thoroughly trained and mentored before and during their first year. They must be given manageable class sizes and course loads, as well as time to collaborate with their colleagues. They need excellent textbooks and other classroom resources. They must be well-compensated so that quality talent is attracted. Teachers’ unions have an important role to play in advocating for teachers’ rights and quality of life. … David B Choned—How can you claim you’re looking at schools as honestly as you can when you don’t bother to give any “inside” view of the schools you demonize? What’s honest about discussing schools without visiting them, without interviewing the people who work in them or attend them? What’s honest about presenting exceptions as the rule?

Mccullen–Mr. Guggenheim, How about you come to my school and spend a week in every classroom. Then make a movie and tell me we teacher’s on the front lines of education are not doing our best. Of course we don’t just drive past the poor, crime-ridden areas on our way to taking our kids to private school. We stop there and work..,very hard. Blaming teacher’s unions is a red herring meant to stir up emotion and anger. However, bad teachers and tenure are not what’s wrong with school in America. Poverty, crime, lack of funding and politicians making policies who have never taught a day in their lives are the problem. Make that movie, please.

Glynis Cooney–I commend you for bringing education reform to the larger public. Unfortunately, like so many who are involved in the current debate over education reform, you have only asked for teachers’ input when it’s past the point of meaning much. Your film is invigorating those who don’t care to read or research and are now crusading against the easy enemy of education; teachers and their representation. … Since your film failed to show all the private donations that aided the profiled schools successes, there are reinvigorated claims that we are overfunded and wasting tax-payer funds. I can’t blame you for short sightedness. Education reformers have been making decisions for decades without inviting teachers to the discussion. Waiting for Superman? As a teacher who cares, gives multiple added hours, and is constantly trying to improve at my craft, you have made me feel like feel like a bottom feeder in Metropolis.

Anthony M Cody–On Oprah, you said “Everybody gets it. It’s automatic. You show up for two years, you got tenure.” That is a lie. In my district, which is known for a strong union, teachers do not get tenure unless their principal approves. Many teachers are released at the end of their first or second year. Tenure is not automatic. And there are indeed ways to get rid of tenured teachers, who do not have “jobs for life,” but rather have rights to due process.

John Thompson–I’ve had more than forty students who have killed someone or died violently. Superman is being used to show that all we need to overcome urban pathologies is high expectations. Superman is feeding the civil war between progressives. You may not realize it but your sources almost all came from the same organized PR campaign choreographed by the McKinsey Group. …

To read more of the teachers’ comments, go here.