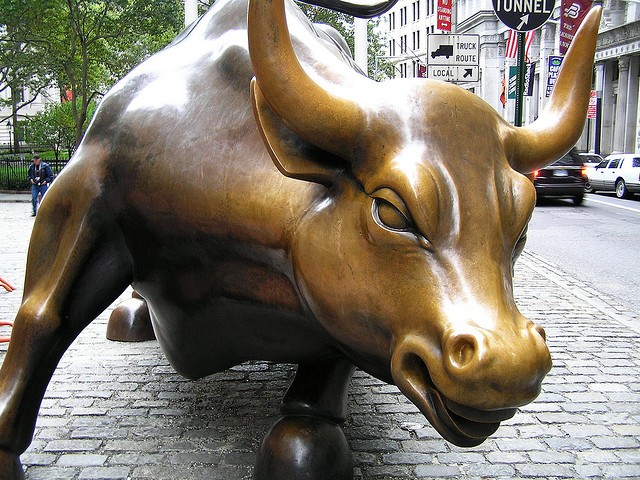 Years from now, Wall Street will look back on 2010 as a banner year, the year the industry fully turned the corner after the meltdown and the Street regained its old swagger. Just two years ago, the country’s biggest banks stood on the brink of complete collapse; several storied institutions—Lehman Brothers, Merrill Lynch, Bear Stearns—either disappeared or were taken over. But in the years that followed, the surviving big banks and investment houses emerged stronger, while the rest of the American economy sank into a recession from which it has yet to fully emerge.

This new Wall Street, smaller but just as profitable, was arguably back in full force this year. Trading revenues soared. Hiring picked up. And that symbol of financial excess—the bonus—was projected to increase yet again. The way it looks, Wall Street is back to its old ways. Here’s a look back on the Street’s 2010 lowlights.

Gutting Financial Reform
The statistics tell the story: From the outset of 2009 to this past summer, Wall Street banks and other financial players—trade groups, insurance companies, real estate brokerages, and more—spent more than $500 million lobbying Congress on financial reform. That’s $1.4 million a day. These firms’ main goal: undercutting, if not outright killing, tough new regulations to prevent the next financial crisis.

In a way, you could say they succeeded. Sure, they didn’t kill the bill. But the end result, known as Dodd-Frank, doesn’t actually reform Wall Street. It reforms the agencies that oversee Wall Street. Apart from the creation of an independent consumer protection bureau and a new rule to ban banks’ risky internal trading, there’s not a whole lot in Dodd-Frank to seriously concern the big banks that caused the 2008 meltdown. As Simon Johnson, former chief economist at the International Monetary Fund, told me in June, “The legislation will not rein in [too-big-to-fail] banks and they will be at the heart of what happens next.”

Partying Like It’s 2004
Almost five years ago, the New York Times‘ business section published a story titled “That Line at the Ferrari Dealer? It’s Bonus Season on Wall Street.” It was a snapshot of the Wall Street high life at the height of bubble-fueled exuberance among America’s financial elite.

Ah, those were the days. Now, two years after the greatest financial meltdown in generations, a cataclysm still fresh in the minds of many, you’d think Wall Street would shy away from its high-flying, Ferrari-dealer days.

Quite the opposite. In November, the Times reported on its front page that the lavish party days seemed to be back in fashion. Paired with a video showing Ferraris and Lamborghinis roaring through New York City’s financial district, the story described a 1,000-person Halloween party hosted by a Goldman Sachs investment analyst at a swanky Manhattan night club (with rapper Lil’ Kim performing) and a Playboy-themed birthday shindig in Hong Kong for the head of Bank of America Asia Pacific. Reservations at posh restaurants were up. So, too, were rentals in the Hamptons. “Two years after the onset of the financial crisis,” the Times wrote, “the stock market is recovering and Wall Street’s moneyed elite are breathing easier again.”

Goldman’s “Shitty” Deals
On April 27, 2010, the Senate investigations subcommittee summoned to Washington current and former executives at the most reviled investment house on Wall Street: Goldman Sachs. Led by Sen. Carl Levin (D-Mich.), the subcommittee had called the hearing, the fourth in a series of public grillings likened to the Depression-era Pecora Commission, after an 18-month investigation into the causes of the financial crisis.

What transpired that Tuesday was a televised lashing of Goldman’s top brass, including CEO Lloyd Blankfein. An animated Levin blasted Goldman’s former mortgage guru and several top traders for essentially betting against complex mortgage products it had helped to create—and, worse yet, knew to be shitty deals.

Indeed, Goldman employees used that very word, “shitty,” to describe one of the deals Goldman put together called Timberwolf, according to a trove of emails unearthed by the investigations subcommittee. The hearing will long be remembered for Levin’s fixation on that “shitty” deal, with the Michigan senator at one point uttering the word “shitty” 12 times in a short span, a tirade that spawned this particularly hilarious video from Slate:

Robo-signers and Foreclosuregate
Thanks to a handful of dogged foreclosure defense attorneys, a pattern of widespread fraud committed by mortgage companies, many of them subsidiaries of Wall Street’s heavyweights, bubbled to the surface this fall. In depositions, employees dubbed “robo-signers” described how they signed hundreds of thousands of crucial legal documents, later used to foreclose on homeowners, without bothering to read what those documents said. Those admissions revealed endemic violations of federal court rules and cast doubt on millions of foreclosures from California to Maine.

State attorneys general, federal regulators, and members of Congress demanded and launched investigations of mortgage companies whose employees admitted to these fraudulent foreclosure practices. In the crosshairs were firms such as GMAC Mortgage, a subsidiary of Ally bank, JPMorgan Chase, and Bank of America. “Rather than spending their time running mass production foreclosure mills, the lenders should be working with individuals to keep families in their homes and restructure their loans,” said Rep. John Conyers (D-Mich.) in October. Investors, dismayed by the rampant fraud in the banks’ foreclosure processes, threatened to make banks buy back faulty loans. Analysts estimated the buy-backs could cost banks anywhere from $55 billion to $179 billion.

The main result of “Foreclosuregate” was the launching of a national probe involving all 50 attorneys general. The investigation is expected to release its findings in the winter or spring of 2011. In December, Iowa Attorney General Tom Miller, who’s heading the probe, offered this assurance to a group of homeowners: “We will put people in jail.”

Mo’ Money, Less Problems
The bonus: It’s the most visceral symbol of Wall Street’s excess. It’s telling that perhaps the biggest outcry during the financial crisis wasn’t the TARP bailout in October 2008, but an attempt by American International Group—the global insurance company that had been bailed out to the tune of $170 billion—to pay out $165 million in bonuses in March 2009. Pre-crisis, bonuses on Wall Street reached a staggering $34 billion in 2006, or an average of $191,360 per employee, according to the New York state comptroller (PDF). Not surprisingly, in 2008, as the financial crisis took its toll, bonuses dipped to $17.4 billion.

But in 2010, with Wall Street profits on the rise, bonuses are expected to keep on climbing. According to a recent report (PDF) by the New York City comptroller, financial firms paid $25.4 billion in bonuses in the end of 2009 and beginning of 2010—and that figure is expected to increase yet again in late 2010 and early 2011.

The Hedge Fund Raids
Hedge funds, those largely unregulated investment firms (or casinos, depending on how you look at it), navigated the financial tsunami of 2008 and 2009 better than most investors. The most successful of them, like John Paulson’s Paulson and Co. and Steve Eisman’s FrontPoint Partners, smartly bet against the subprime mortgage market and were rewarded handsomely when that industry imploded. On the whole, hedge funds’ average losses in 2008 of 18.3 percent comfortably beat the Standard and Poor’s 500-stock index losses of 37 percent.

Then came 2010 and a spate of high-profile insider trading investigations that have rocked the hedge fund world. There was billionaire investor Raj Rajaratnam and his fund Galleon Management, which the Securities and Exchange Commission charged with running a “massive insider trading scheme” that netted $25 million in illegal gains. A few months later, FBI agents raided the offices of three multi-billion-dollar hedge funds in Connecticut, Massachusetts, and New York. More raids are expected in 2011.

Hampering HAMP
The consensus is in: The Obama administration’s flagship effort to help homeowners is a multi-billion-dollar bust. Known as the Home Affordable Modification Program (HAMP), the program was originally intended to provide lasting relief to 3 to 4 million homeowners facing foreclosure. “By making these investments in foreclosure prevention today, we will save ourselves the costs of foreclosure tomorrow—costs that are borne not just by families with troubled loans, but by their neighbors and communities and by our economy as a whole,” President Obama said as he unveiled the program in February 2009.

Almost two years later, HAMP is nowhere near its goal, with nearly 550,000 homeowners receiving permanent modifications and 1.4 million homeowners getting into trial modifications. By contrast, in October, nearly 10 percent of mortgages in America were late by at least 30 days; 10.8 million homeowners were underwater, owing more on their mortgages than their house is worth; and $9 trillion in household wealth had been wiped out by the subprime meltdown and the foreclosure crisis.

The failure of HAMP can largely be pinned on mortgage servicers—the middlemen who collect your payments, handle customer service, and foreclose on homeowners when they fall behind. The worst-performing of those servicers are divisions of big banks like Bank of America, JPMorgan Chase, and CitiMortgage; according to a recent report by the bipartisan Congressional Oversight Panel, Bank of America’s success rate in HAMP is a meager 30 percent. Those three banks also comprised more than two-thirds of HAMP’s modification backlog, in which homeowners are stranded in foreclosure limbo for more than six months.