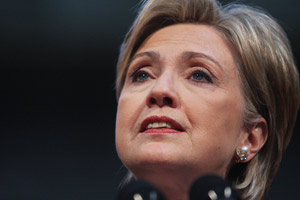 In Washington, interdepartmental turf wars start not with a bang but a paper.

For Secretary of State Hillary Clinton, there’s a pivotal skirmish brewing over development and diplomacy policy. In Clinton’s corner are the State Department and the US Agency for International Development. But across the ring lurks Bob Gates’ Defense Department, the undisputed heavyweight champ of intragovernmental cage fights.

The controversial paper in question? The sort-of-heralded inaugural Quadrennial Diplomacy and Development Review (QDDR), the State Department and USAID’s sweeping review of current aid policy, complete with instructions on how to supposedly revolutionize it. The QDDR offers a number of suggestions for cutting costs, and argues for increasing the authority of US diplomats and aid officers around the world. The end goal: to transform (or restore, depending on whom you talk to) USAID’s position as the preeminent aid delivery organization in the world. But the report also represents Clinton’s steely determination to wrest control of civilian-driven projects back from a Pentagon that has absorbed the lion’s share of the development-related burden over the past decade.

At a town hall meeting on Friday, Clinton said there are certain irrefutable truths at work: the US spends twelve times as much on defense as it does on development, and that’s not likely to change. Another irrefutable truth: the wars in Iraq and Afghanistan have forced American soldiers into moonlighting as ambassadors and development experts. Clinton pointed out that both the Bush and Obama administrations have, over time, ceded control of diplomacy and development to the Pentagon.

For better or for worse, soldiers tend to serve as the first responders to major crises in places where the United States has vested interests—i.e., pretty much everywhere. But Clinton is selling the QDDR as a first step towards restoring balance in the defense/diplomacy relationship. The document calls for hiring 5,500 new foreign and civil service officers and granting expanded authority to current officers. But before civilians can win back territory from the military, State and USAID probably need to improve their own operations with better coordination and smarter management—if only to overcome the skepticism of foreign aid critics on Capitol Hill, such as incoming House foreign affairs committee chair Ileana Ros-Lehtinen (R-Fla.), who has called for cuts in foreign assistance overseen by the State Department.

So Clinton’s fight is not just with the Pentagon, but also with the Hill. And for ammo, she may need more than one dense, jargony report.