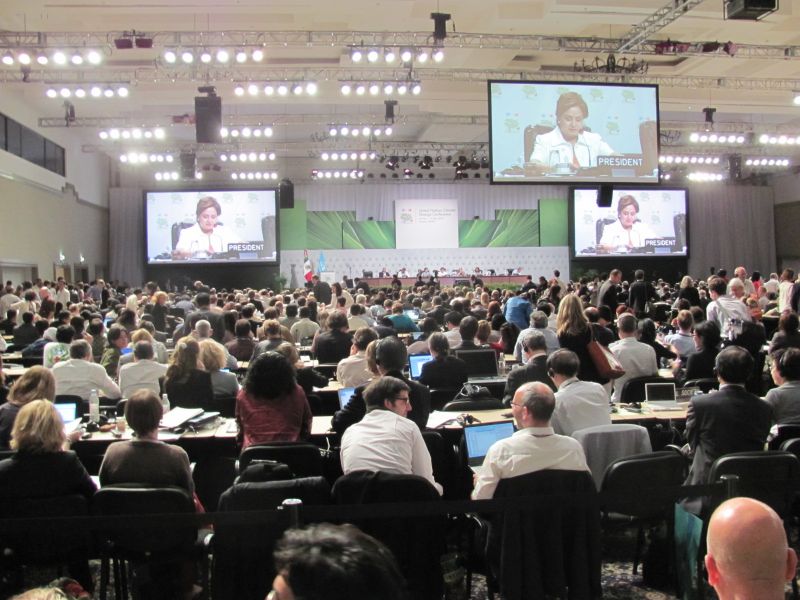 It’s not perfect, and it’s not binding, but international climate negotiators have struck a deal.

The final hours in Cancun were a world of difference from the closing night of the Copenhagen climate talks. Last year’s summit closed with drama, confusion, and plenty of unhappy delegations, but the Mexico conference came to an end with multiple standing ovations for the host country and widespread agreement among countries to approve the text of an agreement.

It was after 3 a.m. when the parties adopted the two agreements—one that delays a decision on the future of the Kyoto Protocol and another laying out in more detail a new agreement on climate that includes major emitters like the US and China. Of the 194 countries represented in Cancun, 193 backed the text—which, while it falls short on many fronts, represented “a new era in international cooperation on climate change,” said Patricia Espinosa, the minister of foreign affairs for Mexico and president of the summit. Much of what is included in the 32-page agreement for a new climate agreement is based on the spare Copenhagen Accord, formalizing it within the United Nations Framework Convention on Climate Change.

The greatest success may have been that the Mexican organizers, particularly Espinosa, were able to restore faith in the process. India’s environment Jairam Ramesh praised Espinosa as a “goddess” for her bringing together the parties around an agreement. “You have not only crafted a balanced agreement but most importantly you have restored the confidence of the international community in multilateralism and the multilateral process at a time when the confidence had hit a historic low,” he said. “I believe we have launched a process where the trust deficit has been considerably bridged.”

Broadly, the agreement accomplishes most of what observers hoped it would heading in two weeks ago: It records the commitments to cut greenhouse gas emissions that developed and developing countries made in Copenhagen, establishes a framework for transparency, sets up a global climate fund with the goal of providing $100 billion in financing to developing countries by 2020, and establishes an initiative aimed at curbing deforestation.

Observers and many parties acknowledged that the progress was modest, and that the emission pledges still fall short of the stated goal of limiting global warming to under 2 degrees Celsius (3.6 degrees Fahrenheit). Those pledges are not legally binding—nor do they answer the outstanding questions about the fate of the Kyoto Protocol, which binds most industrialized nations to emmissions targets, and which is set to expire in 2012.

Not everyone is entirely happy with the final text. Bolivia objected to the adoption of the agreements, saying it did not require enough of wealthy nations. Ambassador Pablo Solon said his country “is not prepared to sign a document which means an increase of the average temperature which will put more human lives in a situation close to death.” But Espinosa moved to adopt the agreement anyway, calling it “one party trying to impose a right of veto upon the will of the conference.” Solon objected to the move to override dissent, a departure from the usual practice to accept agreements only with complete consensus. “Today it is Bolivia, tomorrow it could be any other country,” said Solon.

Most delegations, however, were eager to walk away with something they could declare a win—including the US and China, a signal that the language in the text bridged differences between the two countries about emissions targets and how they would be tracked by other countries.

“What we have now is text that, while not perfect, is certainly a good basis for moving forward,” said US climate envoy Todd Stern. Xie Zhenhua, Stern’s Chinese counterpart, gave similarly positive remarks.

I caught EU commissioner for climate action Connie Hedegaard, who led last year’s talks, leaving the plenary early Saturday morning and asked about the difference between this year and last. “The major difference is that people this year realized if we didn’t get a result here the process risked dying,” said Hedegaard. “Basically it was the political will that changed.”

Environmental groups praised the progress, even while noting the agreement’s flaws. Friends of the Earth called it a “wholly inadequate response” while noting “progress in some areas.” The World Wildlife Fund noted “measurable progress” but added that a “lot more work and some big political challenges remain.”

Among the 193 countries that approved the agreement, there was acknowledgment of the significant challenges that remain, but also a more clear desire to compromise. “This deal is not ideal, but it is a deal that works, and that works for us,” said Sheikh Abdullah bin Zayed Al Nahyan of the United Arab Emirates.

“I speak from a country whose survival is dependent on any deal we get here. Nobody can doubt what sort of interest I have when I speak about the outcome of this conference,” Mohamed Aslam, environment minister for the Maldives. “It is a negotiation. Therefore we don’t get everything we want. There are compromises.”

The debate over the future of the Kyoto Protocol—which legally binds industrialized countries to reduce emissions—is the major lingering question. The United States, of course, famously failed to sign on to Kyoto. Japan and Russia have balked at a second commitment period for the 13-year-old protocol, while developing countries have said that allowing the agreement to expire is a deal-breaker for their ongoing participation in broader climate negotiations. The fate of Kyoto wasn’t resolved in Cancun. “The biggest hole in the Cancun agreement is its failure to permanently resolve the Kyoto conflict. To be fair, that would have been an impossible task this year,” said Michael Levi, senior fellow for energy and environment at the Council on Foreign Relations. “But Kyoto will come back as a front burner issue next year in Durban, and it will be impossible to avoid it again.”

It’s not clear, said Sivan Kartha, a senior scientist with the Stockholm Environment Institute in Boston, whether that one-year delay on a decision will serve as “a lifeline or a noose” for Kyoto.

US envoy Stern skirted the question of the question of whether the new agreement is heading toward a legally binding form anytime soon. “The day will come when there is a legal agreement, but we’re not going to hang everything up on that,” Stern told reporters.

“We should not see this Cancun conference as an end. We should see it rather as a beginning,” said Mexico’s Espinosa. “The text we have before us really seems to be the best we could achieve at this point in a long process.”