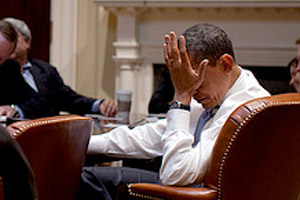 Just days ago, President Obama and liberal Democrats were practically at each other’s throats, trading epithets and insults. But as the president’s tax cut deal passed the Senate on Wednesday with overwhelming bipartisan support, House Democrats appear ready to kiss and make up—or at least shrug their shoulders. With opposition fading, liberals who have vowed to vote against the bill insist that the rift with the White House is no biggie—and emphasize they will have to reunite to fight off the newly empowered Republicans in the next Congress.

Rep. Jim McDermott (D-Wash.) has called Obama’s bill “just awful” and still refuses to support it. But with the passage of the tax package now all but a forgone conclusion, he says he doesn’t resent the White House and is prepared to move on. “I’m a professional, that’s yesterday,” McDermott told reporters Wednesday. “Now today, what’s on the table for today? You can’t walk around sort of nursing grudges. A lot of things get said, and people sometimes go a little over the top. The next day you get over it and go onto the next one.”

He suggested that Democrats would have no problem making up with Obama, recalling the days where former Democratic Speaker Sam Rayburn held court beneath the House floor, in a room where future generations of lawmakers would retreat after bloody legislative flights. “We used to drink branch water and whiskey with a whole raft of people who upstairs were fighting each other tooth and nail here, then they’d go down and have a drink.”

After Obama announced the deal, liberal Democrats complained that the White House had shunted them aside during the negotiations. But now, even Rep. Peter Welch (D-Vt.)—who led the Democratic charge against the bargain—calls the omission of House Democrats from the bargaining table with the Senate “incidental.” “My concern is the content not the process,” says Welch, who still opposes the bill. “The most important thing is the outcome for the American people, not the feelings of the respective houses.”

But what if the White House adopts the same model for compromises with the next Congress, where the Republicans will have an even stronger hand? Welch insists that he’d support such an approach: “I think we’ve got to find common ground and compromise.” Rep. Mike Honda (D-Calif.)—a member of the House Progressive Caucus who’s undecided about the bill—emphasizes that the president had the right to intervene. “The executive branch needs to go ahead to cut the deals they have to cut, and we [in the House] have to do what we can do,” he says. The California Democrat added there was nothing unusual about the rifts within the party: “Herding Democrats is like herding cats…we air our laundry sometimes.”

With the GOP poised to claim a majority in the House and a stronger hand in the Senate, Democrats will be forced to mend their internal rift to fend off Republicans. “Necessity will heal it,” says Rep. Barney Frank (D-Mass.), who says he’ll vote against the tax bill. “We’ll be facing a very strong enemy and given that sure, we’ll have to work together. What holds us together isn’t love…Republican extremism is going to make us allies of each other.”

To be sure, there are still some Democrats who are smarting from the White House’s disregard for its liberal detractors. “It’s not good for him to proceed without enlisting our support,” notes Rep. Hank Johnson (D-Ga.). “We are equal partners.” But Johnson adds that he is hopeful that the president will “redouble” his efforts to reach out to House Democrats—and will himself vote for the tax bargain.

The moment that the tax bill does pass, House liberals will have a clearer target in their sites. “The Republican Party has been demanding this deal,” says Welch. “The moment the ink is dried, [they’ll] accuse the president of adding a trillion dollars to the national debt.” McDermott concludes: “This is the last act of this play—there will be a new play shortly.”