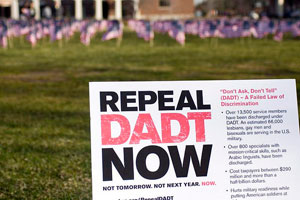 The repeal of Don’t Ask Don’t Tell failed Thursday in the Senate, with the Democrats coming up three votes short of being able to block a Republican filibuster. Senate Majority Leader Harry Reid had been negotiating with Sen. Susan Collins (R-Maine) to bring DADT repeal to the floor while satisfying Republican demands for more time for debate and GOP amendments to the bill. But Reid was reportedly worried that Republicans would continue to prolong the debate unnecessarily—impeding other Democratic legislation on deck—and then decide in the end to kill the repeal provision anyway

Two Republican Senators—Scott Brown (R-Mass.) and Lisa Murkowski (R-Alaska)—said earlier this week that they supported DADT repeal. But both GOPers voted no on Thursday after Reid rejected Republican demands for more time and amendments. Speaking to reporters, Sen. Lindsey Graham (R-S.C.) laid down his party’s rationale: “You’re not going to get our cooperation when you take these bills, you bring them up without any chance that we can participate in the debate.” Collins, however, voted yes—despite having been the GOP’s point person in negotiations with Reid and despite having made the procedural demands in the first place.

There was a lone Democrat—a vulnerable Blue Dog soon up for re-election—who joined with the GOP to defeat DADT. Sen. Joe Manchin, the newly sworn-in member from West Virginia, admitted that he ultimately thought the ban on gay servicemembers should be lifted. The former governor defended his opposition to the bill by saying the timing wasn’t right, citing Congressional testimony from two frontline commanders that DADT could be disruptive during a time of war:

I think it’s going to happen and it probably should happen. But it’s the timing issue for me and for my constituents back home… I’m just saying we have war going on, and when you have a war going on, you ought to listen to the front line.

By contrast, another vulnerable Democratic member up for re-election in 2012—Sen. Claire McCaskill of Missouri—not only supported repeal, but also lit into the GOP for sabotaging the vote. Leaving the Senate chamber, she told reporters that Reid’s attempt to come up with a DADT deal broke down when Republicans demanded the power to offer up amendments that were too extreme. “There was a breakdown over the terminology between relevant and crazy,” McCaskill told reporters. She added that she admired Collins’ “courage” for voting to move forward with DADT repeal, noting that its failure also blocked everything else in the defense reauthorization bill attached to the provision.

Altogether, DADT’s defeat was a depressing reminder of just how intractable the GOP has become. This is just the latest example of the minority party using Senate procedural arguments as an excuse for blocking legislation that may not have another chance to pass for years. Repeal’s defeat also shows how little faith Reid has in the GOP and, perhaps, how few risks he’s willing to take right now given how little time is left in the lame-duck Congress. Earlier on Thursday, the Democratic majority leader decided to defer a tough vote on the DREAM Act, pushing it farther to the margins—perhaps because the Democrats also lacked the votes to put it through. In an increasingly treacherous political climate, moderate and vulnerable Democrats will be under more pressure to protect their right flanks. As Politico‘s Dave Catanese noted, the Manchin-McCaskill split on DADT reveals that such Democrats could either use the GOP as cover—or take a risk and charge to the forefront to attack the opposition.

UPDATE, 6:15 p.m. EST: There may be hope yet for repeal. Collins, Sen. Joe Lieberman (I-Conn.) and Sen. Mark Udall (D-Colo.) are co-sponsoring a standalone repeal bill that Reid has said he will try to bring straight to the floor (bypassing the committee process) at the end of the lame duck session. TPM’s Brian Beutler has more.