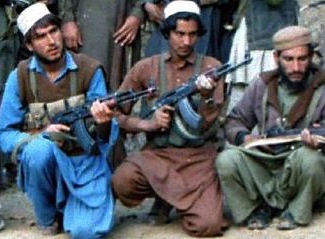 My new favorite Tumblr, Christian Nightmares, is taking pains to document the not-so-brotherly love of the Lord’s more zealous brethren. And thanks to them, I’ve now been acquainted with the hot mess that is Doug Giles. If you have three minutes to check out the video below, you should get to know him, too! He’s the epic new thing in political crusadin’, replete with mesmerizing MTV-style digital after-effects, a skin-tight dragon-applique henley, and action pics of him shooting a bear. Oh, right—he’s got big-league conservative media backing, too.

Giles is the senior pastor of an evangelical flock in my native South Florida called (sorry, Joe Strummer) Clash Church. And if there’s anything a soldier of salvation like Giles should be concerned with, it’s the subject of this video: “Ten reasons why I believe the dour Democratic dames dislike Mrs. Palin.”

Giles’ smiley spunk is indeed impressive: part 5-Hour Energy commercial, part Limbaugh segment, with none of that dreary Jesus talk you might expect from, you know, a keeper of lost of souls. Before he gets around to his Palin list, he squeezes in some time to happily decry “the shemales at NOW and their messengers’ ilk” for criticizing a woman “if she’s not into being a mannish lesbian.” (The visual prop for this is a before-and-after photo montage of Chastity/Chaz Bono, punctuated by several…um…awkward Giles gestures.)

Then, of course, the Alaskan red meat. First and foremost, Giles tells us, Palin’s hot and she knows it. And Democratic women aren’t. (Yeah, we might have heard that before.) But oh, the cutting analysis! Like some lovable foster-care offspring of Jimmy the Greek and Lisa Lampanelli, he intones:

…We all know how jealous and petty some chicks can be when they’re aesthetically upstaged, right?…Catfight!

Doug’s cheery message is produced by “Clash TV,” courtesy of HumanEvents.com. Ever hear of them? Human Events, a journal that’s part of the right-wing Regnery publishing empire, has been around since 1944, and its columnists include such heavyweight luminaries as Oliver North, Mike Huckabee, and Chuck Norris. Nevertheless, its longtime editor, Tom Winter, is a vice chairman of William F. Buckley’s old American Conservative Union, so they’re not exactly on the fringe of the fringe in Washington.

Neither, apparently, is Doug Giles: