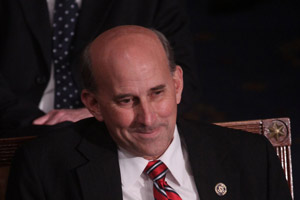 Rep. Louie Gohmert (R-Texas) would like to become the next chairman of the conservative Republican Study Committee, a body that has launched many an ambitious pol to higher GOP leadership in the House. And he wants tea partiers to help him get there.

Gohmert is a tea party kind of guy. A staple of their rallies, he voted against every stimulus and bailout proposal brought to the House floor when the economy was in a tailspin, making him a fiscal conservative rock star in tea partiers’ eyes. He’s also a colorful fellow, famous for his attacks on illegal aliens, as well as his suggestion that pregnant Arab women were seeking visas to come to the US to give birth to “terror babies.” Last year, at a tea party rally on Capitol Hill to protest the health care bill, Gohmert fired up the crowd, declaring, “I’ve brought an abortion to show you.” He then went on to wave a copy of the health care reform bill in the air.

Tea partiers like the idea of Gohmert heading the Republican Study Committee (RSC), where he’s promised to serve as a watchdog of his party. Most House Republicans, however, are less excited by the idea of giving the chairmanship to a guy who once protested US funding for the protection of rare dogs and cats in China by saying that there was no guarantee they wouldn’t be turned into “moo goo dog pan“—and who has co-sponsored a bill demanding that all presidential candidates prove their citizenship before running for office.

The RSC is a party organ created by conservative members to get House Republicans to hold the line on conservative principles. It’s just the kind of obscure job where a tea party loyalist could make a big difference and also move up the leadership ladder. In the past, the job has proven to be a launching pad for rising stars of the party, including Indiana Rep. Mike Pence, the 2008 RSC chair who is considering a run for the presidency in 2012. The committee is currently headed by chair Rep. Tom Price (R-Ga.), a doctor who served as the Republicans’ point man during the health care reform battle. Price is moving up to head the Republican Policy Committee, the House’s fifth-ranking Republican slot.

An RSC nominating committee has already chosen its favorite candidate, Rep. Jim Jordan of Ohio. But Gohmert has decided to challenge Jordan on the grounds that Jordan is essentially the “wingman” for House Speaker-in-waiting John Boehner (R-OH) and not an attack dog who can keep the party leadership true to its conservative principles. And it’s clear that tea party activists would much rather have Gohmert in that job, too.

Last week, the Tea Party Patriots held a tele-town hall with Jordan and Gohmert to introduce the candidates to their members, whom they are urging to weigh in on the decision. Gohmert sold himself to the tea partiers as a lawmaker who isn’t afraid to call out members of his own party when they stray from core conservative principals. “Anyone who knows me knows I don’t run from anything, and that includes a battle with our own party,” Gohmert said. He promised to ensure that shutting down the government remained an option in the coming fight next year to repeal the Obama administration’s health care bill, after agreeing with a caller who complained about some “wishy washy” language coming from some of the GOP House leadership.

Gohmert knocked Boehner for comments suggesting that there were elements of the health care bill that should remain in place, saying, “I think it’s ridiculous to take off the table the government shut down. I learned many years ago that if you’re going to bluff…you’ve got to mean it or nobody will ever believe you again.” He pledged that if elected to the RSC chairmanship, he would “keep Boehner on the reservation,” and he promised that he wasn’t at all interested in using the job as a launching pad for higher office. Gohmert also hit on other key tea party themes, promising to support an audit of the Federal Reserve, questioning President Obama’s honesty and his real commitment to a federal government pay freeze. And he emphasized his opposition to the DREAM Act, which would provide certain illegal immigrants with a path to citizenship.

Jordan did his best to prove his conservative bona fides, touting his co-sponsorship of a bill with Rep. Ron Paul (R-Texas). But after the call, a TPP poll of the call participants found that 70 percent preferred Gohmert. While TPP isn’t officially endorsing anyone in the race, it is encouraging activists to lobby RSC members on their preferences.

Whether the tea party influence can work remains to be seen. Gohmert needs to win the votes of 25 percent of the study committee’s members just to get on the ballot. He told the tea partiers last week that he expected to clear that hurdle. A vote could take place as early as Wednesday afternoon. It’s not unprecedented for an insurgent to beat the party favorite. In 2006, Texas Rep. Jeb Hensarling defeated Rep. Todd Tiahrt of Kansas in a similar move.

The RSC chair race isn’t the only internal GOP election that the tea partiers are weighing in on. They’ve had similar town-hall meetings with candidates running for key House committee chairmanship posts, including appropriations and energy. And tea partiers last week helped sponsor and participate in a debate among candidates aspiring to replace RNC chairman Michael Steele, hoping to have an early impact on the contest.

As RNC member James Bopp told me last week, their involvement in these races is cementing the tea party’s new designation as the “fourth leg” of the formerly three-legged stool of the Republican Party, which used to include evangelicals, economic conservatives, and defense hawks. So far, however, their success in upending the House leadership handpicked by Boehner has proven limited. On Tuesday, a GOP House steering committee headed by Boehner selected Rep. Fred Upton from Michigan to chair the powerful House Energy and Commerce Committee. Upton was the tea partiers’ least favorite candidate for the job, primarily because his votes to expand state health care for children and support for banning incandescent light bulbs. The Republicans also rebuffed the tea partiers for the chair of the Appropriations Committee, passing over Rep. Jack Kingston (R-GA), a tea party favorite, for Rep. Hal Rogers (R-KY), a man dubbed by Democrats as the “king of pork” thanks to his success at winning earmarks sending millions of dollars to his home state. Given how much tea partiers hate earmarks, his selection was a major defeat for the grassroots movement.

The results of those elections may make the choice for RSC chair even more important, as it may be the one place where the tea partiers can wield some influence over the old bulls who will be running the key House committees. How powerful they turn out to be in the long run could be determined by the outcome of Gohmert’s RSC bid.

UPDATE 12/8/10: The Republican Study Committee rejected Gohmert (and the tea party) and voted to install Rep. Jim Jordan as its new chair, leaving the tea party 0 for 3 in its House leadership fights.