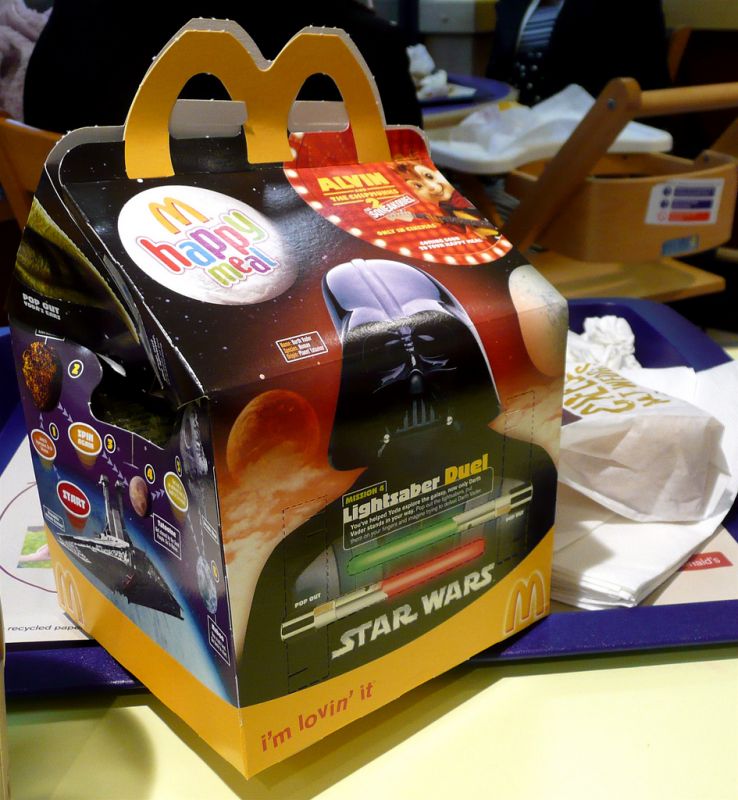 Happy Meals just got a little more expensive for McDonald’s: the fast food chain has been sued by California mother Monet Parham for using toys to make her two young daughters want nutritionally unsound Happy Meals. The class-action lawsuit (PDF) was filed in conjunction with the Center for Science in the Public Interest in California Superior Court in San Francisco this morning. Filing the bill in San Francisco, rather than Parham’s home city of Sacramento, was a calculated move: San Francisco recently passed a “Healthy Meal” bill that requires meals with an “incentive item” to contain fruits and vegetables, be under 600 calories, and not have beverages with excessive fat or sugar.

Parham, mother of a six-year-old and two-year-old, said in a CSPI press release that:

“I object to the fact that McDonald’s is getting into my kids’ heads without my permission and actually changing what my kids want to eat… what kids see as a fun toy, I now realize is a sophisticated, high-tech marketing scheme that’s destined to put McDonald’s between me and my daughters… I want McDonald’s to stop interfering with my family.”

Parham complains that the firm affects her personal life and relationship with her daughter, but the main thrust of the lawsuit seems to be that CSPI thinks 1) Happy Meals are not a healthy choice for children and 2) McDonald’s inclusion of a toy with Happy Meals “is illegal” because it advertises to children who do not have the “cognitive skills and the developmental maturity to understand the persuasive intent of marketing and advertising. Thus, McDonald’s advertising featuring toys to bait children violates California law because it is inherently deceptive and unfair,” the suit reads.

If it’s fraudulent to advertise to those without sufficient “cognitive maturity,” shouldn’t all advertising to children be illegal? What about ads targeting beer-soaked 20-somethings? Or those who think poodles speak in French? To bolster its claim of illegality, CSPI sites California Business & Professions Code Section 17200. That code is a 50-word paragraph that simply says businesses shall not engage in unfair competition using any “unlawful, unfair, or fraudulent business act” and shall not make false or misleading advertisements. Personally, I don’t find the McDonald’s ads any more misleading than a commercial showing women delighted by tacky, moderately-priced jewelry (“He went to Jared!“) or smilingly wiping up the mess their klutzy/helpless/hopeless hubby made in the kitchen.

While a 2007 CSPI lawsuit did motivate Kellogg’s to implement some new nutritional standards, the allegations underlying the McDonald’s lawsuit are so outlandish, that I can’t imagine it’ll have much chance of winning. Instead, CSPI and Parham would be lucky to get McDonald’s to implement any changes. McDonald’s has defended itself against many lawsuits, like the 1994 suit over $.49 cup of hot coffee a customer spilled on herself (settled for an unknown amount), and the 2003 suit in which New York parents sued the company for their daughters’ health woes, including diabetes, high blood pressure, and obesity. That case was dismissed.

Parham is claiming she has “lost money or property because of Defendants’ [McDonald’s] activities and therefore have suffered an ‘injury in fact.'” She also claims that McDonald’s advertising is so invasive and so compelling, it subverts her parental authority by “getting into” her daughters’ heads and making them pester her for things that are not good for them. Problem is, that could be applied to just about any company, especially around Christmas. Parham is totally within her parental rights to deny her children McDonald’s food, but instead she’s filed a suit asserting “Plaintiffs would not have bought Happy Meals but for McDonald’s deceptive marketing to very young children with a toy.” It’ll be up to the judge to decide whether McDonald’s should be responsible for making Parham cave to toy-obsessed youngsters, but I wouldn’t hold my breath.