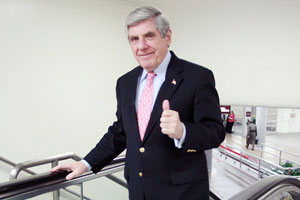 President Obama’s tax package has elicited a fierce backlash from Senate Democrats, with only the likes of Ben Nelson—one of the caucus’ most conservative members—openly welcoming the president’s compromise so far. Liberal members are infuriated with Obama’s concessions to the Republican Party over extending the Bush-era tax breaks, accusing the president of caving without a fight to the GOP. Sen. Mark Udall (D-Colo.) has already come out against the compromise, calling the extension of tax cuts to the top 2 percent of families “objectionable” and “unbalanced.” “I’m opposed to this package based on what I know that’s in it,” Udall told reporters this afternoon. Sen. Bernie Sanders, the socialist Democrat from Vermont, has already vowed to filibuster the bill.*

The compromise has also raised the hackles of centrist Democrats including Sen. Mary Landrieu (D-La.), who slammed the proposal for raising the deficit and supporting the rich at the expense of the poor. “We’re borrowing money from those with net worth of $5,000 or less to give families that have income of more than $1 million,” Landrieu told reporters, striking an unusually populist tone. She called the bargain an “unprecedented” move that would hurt the poor- and working-class families in her state—”many of whom are African-American,” she added. Landrieu also had strong words for Obama, accusing the president of taking Democratic support for granted. “He basically didn’t think any of us cared much about this—well, I care,” she added. “I can’t imagine the president leading the country in that direction.”

Both liberal and moderate Democrats have used the tax bargain as a way to seize the bully pulpit—perhaps for the first time since their “shellacking” in the midterm elections. Having all but given up on Republican support for any Democratic proposals, party members have put the conciliatory White House in their sights. To be sure, a good number of moderate Democrats could end up supporting the deal in the end: despite her vocal objections, Landrieu said she was still “undecided” about her vote. But, she emphasized, she would be kicking and screaming if she did come aboard. “If I end up voting for this package, it will not be silently—it will be being sort of dragged to that position,” she said.

There was one Democrat, however, who seemed to stand alone in praising the negotations. Sen. Ben Nelson (D-Neb.)—often described as the most conservative Democrat in the Senate—praised the tax compromise for “going in the right direction.” While he described himself as an undecided vote on the package, Nelson said that extending the tax cuts was a sound economic move that would prevent a “double-dip depression.” He told reporters:

It’s a question of hard choices. Do you shock the economy more with tax increases than you do with adding to the debt?…Most economists [say] it’s a choice you’ve got to make…you’d vote for extending the tax cuts than not.

I agree that the president needed to step forward and talk and become part of the process. There’s a difference between showing leadership and meddling. I don’t think the White House is interested in meddling. I hope they’ll show leadership when we get into these difficult areas where we’re locked in gridlock.

The Nebraska Senator himself has frequently been in the same spot: refusing to comply with the entire Democratic agenda while portraying himself as a moderate, non-ideological centrist. The president sugested as much today during his press conference, comparing the current fury of the left to the public option during the health care debate. Nelson was key to defeating the public option at the time and that the White House ultimately refused to fight to keep it in, despite Obama’s stated support for the program. The president is going down the same Ben Nelson-like path once again and has consequently subjected himself to the same vitrol.

Liberal pragmatists like Ezra Klein are hoping, however, that this is only a circumstantial move that will give Obama the political capital he needs to push through other bills during the lame-duck session—and to launch a real fight against the GOP over taxes in 2012. But it’s unclear whether this is a momentary shift or a sea change that foreshadows total Democratic capitulation when the Republicans actually take power next year.

*Update: Sanders has now vowed to find GOP support to defeat the bill: “Our job now is to find a handful of Republicans who are willing to vote no on this agreement and then come back and come up with a proposal that is much stronger and much fairer.” He says he’ll appeal to them on the deficit, as the bill isn’t paid for. But while he insists that there will be some red-state Republicans who will oppose tax-breaks for millionaires on such grounds, he also predicts that the GOP will conveniently ignore the deficit when it comes to helping the rich before taking up the crusade again in the next Congress—in order to kill health-care provisions, Pell Grants, and water down Social Security. He may find a friend in Republican Sen. George Voinovich (R-Ohio), who’s also vowed to defeat any tax bill.