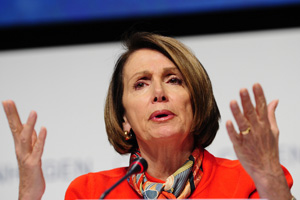 In the basement of the Capitol building, House Speaker Nancy Pelosi briefly exited a meeting where the members of her Democratic caucus were wringing their hands over President Barack Obama’s tax bill last Tuesday night. A scrum of reporters and television camera crews immediately materialized around her, pelting the Speaker with questions about the liberal revolt that threatened to derail the president’s deal. Pelosi lowered her well-coiffed head and kept walking silently—she was simply heading to the ladies’ room. When the Speaker finally emerged, she answered one unrelated question about a separate spending bill, then swiftly disappeared back into the room without saying another word.

The highest-ranking Democrat in Congress, in her final days as Speaker, would remain largely silent for much of the week, while a debate raged in the halls of the Capitol over this defining policy move. Obama’s $858 tax bill—which tied progressive policy initiatives to the extension of George W. Bush’s bonus tax cuts for the rich—had put the famously bold, unapologetically liberal Pelosi in an unenviable position: she was wedged between a House Democratic caucus that despised the deal and a president who owned it. If she blew off her angry members, she’d be defying her own party. If Pelosi ceded to their demands to change or oppose the deal, she risked sabotaging the president’s grand compromise—the equivalent of staging a political coup. So Pelosi decided to go AWOL.

Having shepherded Obama’s biggest legislative priorities through Congress, Pelosi has been heralded as the most powerful speaker in recent history. But when Obama decided for the first time to secure GOP support before relying on his own party, Pelosi sat on the sidelines—delegated, it seemed, to minority status even before the House Republicans officially took the helm. And as Obama’s re-election campaign inches closer, the president may try to strike more deals with Republicans in a bid for independent voters. How will Pelosi fit into this political calculus? Will she continue to demur as minority leader—or will she try to assert her independence as the leader of the most liberal faction of Democrats in Washington?

Last week placed Pelosi out in the cold, and her decision to enter a deep freeze left her caucus at loggerheads. While her liberal members protested, bickered, and cursed out the president over the bill, Pelosi issued a mild statement explaining she was still trying to “continue discussions with the President…in the days ahead to improve the proposal.” Though she managed to eke out clean energy tax credits in the Senate version, the tweak hardly mollified her agitated members. Subsequently, Pelosi sat on her hands: she neither rallied behind the bill, nor actively whipped for amendments to change it. Resigned to the bill’s passage, at one point she gave a brief, 10-minute speech, outlining the benefits of the package. She held no press conferences during the week.

In the final stretch, Pelosi and her deputies seemed disconnected from their Democratic comrades. When the tax bill was finally brought up for a vote on Thursday afternoon without any of the final changes her caucus was demanding, Pelosi was unexpectedly forced to pull the legislation off the House floor when she didn’t have the votes to move forward. “No one knew what was going on—and I don’t think leadership knew what was going on,” a House Democratic aide told me. Late that night, the mammoth tax measure finally passed the House. At the White House signing ceremony the next day, Pelosi was conspicuously absent.

What does this bode for her minority leadership to come? The recent circumstances undercutting Pelosi have been unusual. Obama had a limited time to push through a huge grab bag of legislation before newly elected Republicans swept into Washington. From his perspective, he had to work more with the Republicans than the Democrats to seal this last-minute deal—and he could afford to alienate liberal House Democrats, for he would still have enough votes to pass the legislation without them. It’s unclear whether in the coming two years, he will be able—or willing—to forge similar accords with the congressional Republicans. So the tax deal might have been a one-off. Still, the next Congress might place Pelosi in an increasingly constrained position.

The last time she was minority leader, in 2003, Pelosi could rail against President Bush’s agenda. She was a highly effective opponent, leading the charge that paved the way for the Democrats to retake the House in 2006. Then as Speaker, she swung the gavel well. When Obama took office, he laid out a liberal agenda that Pelosi swiftly put through the House. She was credited for single-handedly bringing health care reform back from the dead after Sen. Scott Brown’s victory seemed to doom the bill, rallying her base and brokering compromises with moderates who threatened to submarine the deal. But if Obama decides to continue his new course and makes more plays for the center, he will be pitting himself against the House Democrats—a more liberal bunch, given that many Blue Dog Democrats were bounced out of office in November—and Pelosi will be stuck in the middle again. At the same time, Obama will have to rely on Pelosi to fend off attacks from the GOP opposition (as in health care repeal), and she will have to unite her caucus and take up the bully pulpit once more.

Despite her huge legislative triumphs—or because of them—Pelosi became a prime target for Republicans, who plastered her face all over their 2010 campaigns ads and who were positively gleeful about her unexpected return to the Democratic leadership. As such, Pelosi might opt to adopt a lower-profile role in the months ahead—even if Obama ramps up partisan war against the Republican opposition. The past week, if not indicative of what’s to come for Pelosi, does underscore one overarching truth about her role in the new era: it’s complicated. Pelosi could end up concluding her time as minority leader much as she wrapped up her tenure as House Speaker—not with a bang but a whimper.