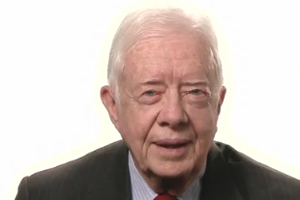 The folks over at Big Think have just posted a recent interview with President Jimmy Carter. (Watch an excerpt below.) They offered MoJo a chance to ask a question of the man from Plains, and we passed the opportunity on to our readers. MoJo Facebook friend Aaron Parr suggested asking Carter about his July 1979 “crisis of confidence” speech, in which he urged Americans to embrace energy conservation and alternative energy sources as a means to kick start the economy and their flagging sense of civic pride. “The solution of our energy crisis,” he concluded, “can also help us to conquer the crisis of the spirit in our country.”

It’s often called the “malaise” speech, though Carter never uttered that word. For better and for worse, Carter’s decision to use his bully pulpit to deliver a sober reality check became one of the definining episodes of his single term. Reading the speech today, it’s remarkably—and depressingly—relevant. Which prompted Parr to ask the 39th president, “Has America failed to adequately address the problems you laid out in your 1979 ‘crisis of confidence’ speech?”

Watch Carter’s full response to Parr’s question below the jump. Here’s an excerpt, in which he discusses China’s ascendency in the alternative energy market and his iPad (!):

We’ve become increasingly addicted to consumption of goods that we don’t produce ourselves, and a lot of the manufacturing has gone overseas…When I was in office, we had the pre-eminent position in the production of alternative sources of energy—windmills, and photovoltaic cells, things of that kind. Now that ascendancy has moved to China. China’s the number one producer of new kinds of advanced photovoltaic cells, for instanced. And they are the number one producers of advanced windmills to utilize the power from the sun and directed through the wind. So we’ve lost that edge that we used to have in scientific innovation applications to goods to be sold. In many ways, that is also changing in the electronic field. Almost all of the materials that we use now are of advanced technology, I have an iPad and also an iPod, both of which are made in China. Although we have designed them here with Apple, for instance, they are manufactured overseas.

And watch the remainder of the video at Big Think, including Carter’s thoughts on whether the United States is ready for a gay president (yes!) and his advice for Barack Obama (“be much more firm in letting his specific views be known and then adhering to his committments through thick and thin.”)