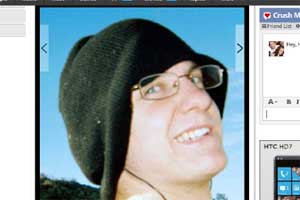 Jared Lee Loughner (pictured above in an undated MySpace photo) is the main suspect in the shooting of Rep. Gabrielle Giffords (D-Ariz.) and more than 20 others during a public event at a Safeway grocery store on Saturday.

Rep. Gabrielle Giffords (D-Ariz.) was shot in the head Saturday morning at a “Congress on Your Corner” event outside a supermarket in Tucson. After initial reports that Giffords had died, the hospital has confirmed she remains in critical condition though she is “expected to pull through,” according to MSNBC. Six people were killed in the shooting—including federal judge Bill Roll, Giffords’ district director, and a nine-year-old child—and at least 12 people were injured.

The alleged assailant has been identified as 22-year-old Jared Lee Loughner, an Arizona resident described by one eyewitness as a white, clean-cut man who reportedly called out the names of some of his victims as he began shooting. (The Associated Press identified the suspect, who’s now in police custody, as Jared Laughner, but the Arizona Daily Star, Politico, and other outlets have ID’d him as “Loughner.”) The suspect appears to have posted YouTube videos under the handle “Classitup10” that rail against the government and talk of revolution and terrorism. The user, identified as “Jared Lee Loughner,” says in a rage-filled, rambling, and incoherent post accompanying one video:

We need a drum roll for those front runners in the election; those illegal teachers, pigs, and politicians of yours are under illegal authority of their constitution. Those dirty pigs think they know the damn year. Thirdly, tell them mother fuckers to count from 0 to whenever they feel a threat to stop their count…Those illegal military personal are able to sign into a country that they can’t find with an impossible date! How did you trust your child with them fraud teachers and front runners, listener? Did you now know that the teachers, pigs, and front runners are treasonous!

In another video, the same user accuses the government of imposing “mind control and brainwash on the people by controlling grammar.” Loughner continues: “You don’t have to accept hte [SIC] federalist laws…A terrorist is a person who employs terror or terrorism, especially as a political weapon. If you call me a terrorist then the argument to call me a terrorist is Ad hominem.”

Giffords, a moderate Democrat, had been threatened in the recent past. Shortly after the health care vote, Giffords’ district office was vandalized, and extremists subsequently encouraged the public to throw bricks through the windows of lawmakers, as my colleague James Ridgeway has reported. (Other Democratic supporters were also subject to violent threats and attacks on their offices.) In the summer of 2009, Giffords’ aides called the police after an attendee at a public event dropped a gun. The 40-year-old Arizona Democrat barely squeaked by her opponent in 2010, winning by less than one percentage point against the tea party-backed Jesse Kelly. The Tucson event was her first public appearance since her re-election.

Rep. Raul Grijalva, another Arizona Democrat, was also recently threatened with violence: in July, a bullet was fired through the window of his district office in Yuma, and an envelope with a toxic powder was sent to his Tucson office.

Read our exclusive interview with a friend who describes Loughner’s family, bizarre dream journal, and his obsession with Rep. Giffords. Full coverage of the shooting and its aftermath is here.