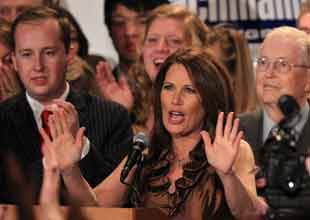 Does Michele Bachmann think only Christians should run the government? She certainly hangs out with a lot of people who do. On Sunday, Florida’s Coral Ridge Ministries aired an episode of its new TV series on issues facing the 112th Congress that focuses on “Obamacare.” Bachmann is the show’s biggest draw, along with presidential aspirant Rep. Mike Pence (R-Ind.), and tea party freshman Rep. Allen West (R-Fla.).

Coral Ridge Ministries is the media empire created by the late D. James Kennedy, who founded the Coral Ridge Presbyterian Church in Fort Lauderdale, Florida in 1960 and turned it into one of the country’s leading megachurches. It’s hardly unusual for conservative politicians to cozy up to religious broadcasters. But Bachmann’s appearance, as she’s considering a run for president in 2012, and her association with others of similar religious views, should raise some eyebrows.

Coral Ministries is considered by many religious scholars to be affiliated with Christian Reconstructionists, who take the radical view that Jesus Christ will not return to earth until Christians have taken over all forms of government, among other things. (They are sometimes also referred to as “dominionists.“) Kennedy devoted many of his broadcasts to the idea that the Founders were Christians who intended to establish a Christian Constitution, a staple of Reconstructionist dogma.

During a 2005 conference sponsored by Coral Ridge Ministries dedicated to “reclaiming America for Christ,” Kennedy informed attendees that, “As the vice-regents of God, we are to bring His truth and His will to bear on every sphere of our world and our society. We are to exercise godly dominion and influence over our neighborhoods, our schools, our government…our entertainment media, our news media, our scientific endeavors—in short, over every aspect and institution of human society.”

His rhetoric tracks with that of the Reconstructionist movement’s intellectual father, Rousas John Rushdoony, who palled around with Kennedy and even appeared on Coral Ridge Ministries’ broadcasts before he died in 2001. Rushdoony was a leading advocate of Christians entrenching themselves in politics to take over the world and helped launch the homeschooling movement as a way of grooming such holy warriors. He was also a Holocaust denier and a defender of slavery and segregation (apparently because slavery is OK in the Old Testament).

His views were considered so radical that even the late Rev. Jerry Fallwell denounced them. Still, even a decade after his death, Rushdoony’s son-in-law, the “Christian economist” Gary North has carried the torch of Reconstructionism, arguing that women who have abortions should be executed, along with gays and people who hit their parents, preferably by public stoning, which North has recommended for its community-building qualities. In 1982, North, also an occasional featured guest at Coral Ministries, explained the aims of Reconstructionists who influenced Kennedy, like this:

“We must use the doctrine of religious liberty…until we train up a generation of people who know that there is no religious neutrality, no neutral law, no neutral education, and no neutral civil government. Then they will get busy constructing a Bible-based social, political, and religious order which finally denies the religious liberty of the enemies of God.”

Later, in his 1989 book, Political Polytheism: The Myth of Pluralism, he wrote, “The long-term goal of Christians in politics should be to gain exclusive control over the franchise… Those who refuse to submit publicly…must be denied citizenship.”

Coral Ridge’s Kennedy denounced attempts in the late ’80s to link him with Reconstructionists, writing in one of his books, “I am not advocating a theocracy.” But he certainly traveled in their circles before his death in 2007, calling books by Rushdoony “essential.” Coral Ridge Ministries also published books by other leading unabashed Reconstructionists, such as George Grant, a minister who has called for the death penalty for gays and who at one time served as the Coral Ridge Ministries’ executive director. In 2006, Coral Ridge Ministries produced a documentary called Darwin’s Deadly Legacy that blamed the doctrine of evolution for inspiring Hitler to launch the Holocaust. Kennedy was an “intelligent design” proponent and a critic of evolution—as is Michele Bachmann, who seems pretty comfortable with the folks who populate Coral Ministries. (A Bachmann spokesman did not respond to requests for comment for this story.)

Bachmann’s appearance in the January 9 Coral Ridge episode is far from her first affiliation with the group. She’s been a regular on Coral Ministry broadcasts, even starring in a documentary it produced last summer warning about the evils of encroaching socialism. Last fall, she headlined the “How to Take Back America” conference, which has been taken over from Coral Ridge by WorldNetDaily, the conservative news website. The conference also featured North and Gary DeMar of American Vision, another unapologetic Reconstructionist whose book, American Heritage, was published by Coral Ridge Ministries. The book attempted to link Christianity to the Constitution.

DeMar has said his mission is to create “an America that recognizes the sovereignty of God over all of life, where Christians apply a Biblical worldview to every facet of society. This future America will be again a ‘city on a hill’ drawing all nations to the Lord Jesus Christ and teaching them to subdue the earth for the advancement of His Kingdom.” Such views of Christianity and politics don’t leave a lot of room in politics or government for people of other faiths.

Publicly, Bachmann simply claims to be a Lutheran, but her affiliations suggest she is influenced by the Reconstructionists and their belief that Christians should run the government. Take, for instance, her recent statements suggesting that David Barton should teach Constitution classes to the incoming congressional freshmen. Barton, the founder and president of the “pro-family” group WallBuilders, believes, among other things, that the idea of separation of church and state is a myth and that homosexuality should be regulated by the feds (a view that would apparently make him a bit of a “soft” Reconstructionist, as he hasn’t called for gays to be publicly executed). Barton has also suggested the US borders were drawn by God and that it’s unconstitutional for Congress to meet on Sundays. Bachmann and Barton are old friends.

Bachmann was also part of a group of conservative lawmakers in the Congressional Prayer Caucus who sent a letter to President Obama last month chastising him for not saying “God” enough and for saying in a speech that the national motto is “E pluribis unum” rather than “In God We Trust.” Bachmann and her colleagues also took Obama to task for failing to emphasize that the inalienable rights vested in the Declaration of Independence come from the “Creator.”

None of this church-state mixing is new for Bachmann. Back in the early 1990s, she started a public charter school in Minnesota that later ran into trouble with authorities for trying to inject Christianity into the curriculum and for attempting to set up classes on Creationism. (Bachmann’s own children were mostly homeschooled.) When she first ran for Congress in 2006, she was literally introduced and endorsed from the pulpit by the leader of a Minnesota megachurch known for promoting Reconstructionism.

Bachmann’s religious views haven’t received much attention, perhaps because she has provided so much other fodder for reporters to chew over. But now that she’s considering a presidential run, her decisions to headline religious events and broadcasts for organizations like Coral Ridge Ministries deserve far more scrutiny. After all, in a country where people of all religions rub shoulders at the voting booth, any candidate who thinks the government should be dominated by a single faith should raise as many eyebrows as one who thinks Social Security ought to be abolished.