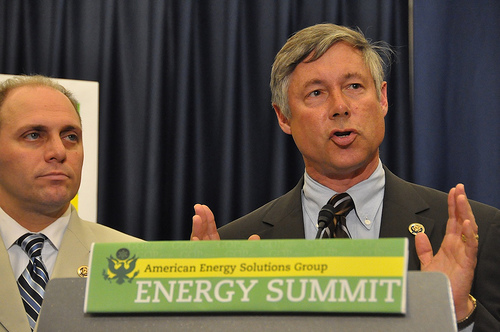 The new Congress kicks off on Wednesday, and Rep. Fred Upton (R-Mich.), the incoming chair of the energy and commerce committee, has promised to put regulation of climate-changing emissions on the top of the docket—blocking it, that is. And he’s indicated that he may use an obscure tactic to thwart the new EPA rules governing emissions from major sources of greenhouse gas pollution.

Upton recently suggested that he may seek to employ the rarely-used “resolution of disapproval” to block the EPA’s regulations. “We are not going let this administration regulate what they have been unable to legislate,” Upton said on Fox News Sunday (via The Hill), referring to the fact that the Senate did not pass a climate law last year. Upton told Fox a disapproval resolution might be one way they could block the EPA’s carbon rules, which officially began phasing in on January 2.

The disapproval resolution was authorized by the Congressional Review Act of 1996 as part of Newt Gingrich’s “Contract with America,” and it allows Congress to overturn regulations from the executive branch within 60 days of their publication in the Federal Register. It is rarely invoked and even more rarely successful. Republicans did succeed in using it in 2001 to block new ergonomics rules from the Occupational Safety and Health Administration under the Clinton administration, but it hasn’t been successfully employed since. (If Congress does succeed in blocking an administrative rule, the agency that issued it is also barred from creating any future rule that is substantially similar to the blocked one.)

With Republicans in control of the House and the majority of the caucus openly dismissive of the science on global warming, a disapproval resolution would probably pass in that chamber with ease. Of course, a disapproval resolution would likely be vetoed by the president, as Upton noted on Sunday. But as he also mentioned, there are a number of Democrats in favor of axing the EPA’s new emissions rules. Six Senate Democrats voted for a disapproval resolution that Sen. Lisa Murkowski (R-Alaska) put forward last June that would have blocked the EPA’s finding that greenhouse gases pose a threat to human health, a finding that led to the new regulations. Four of those Democrats will return to the Senate this year, and at least one freshman Democrat, Joe Manchin of West Virginia, has also pledged to shoot down EPA regulations. Because a disapproval resolution requires just 51 votes in the Senate—rather than the 60-vote hurdle most legislation needs to clear these days—it could actually go somewhere.