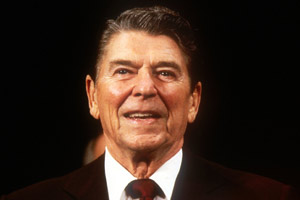 CBS reporter Lesley Stahl may be able to settle the family feud that has erupted between President Ronald Reagan’s two sons over an important historical issue: Did the 40th president have Alzheimer’s disease when he was in the White House?

In a new memoir, his son Ron suggests that Reagan suffered from the beginning stages of this disease while he was commander in chief, pointing out that his father became “lost and bewildered” during the 1984 presidential debates with Democratic nominee Walter Mondale and that in 1986 Reagan could not remember the names of familiar landmarks. But Ron defends his father, who was not diagnosed with Alzheimer’s until 2004, and his aides: “I’ve seen no evidence that my father (or anyone else) was aware of his medical condition while he was in office. Had the diagnosis been made in, say 1987, would he have stepped down? I believe he would have.”

Ron Reagan’s comments have ticked off his half-brother, Michael Reagan, who was adopted by Ronald Reagan and his wife, actress Jane Wyman, 13 years before Ron was born to Reagan and his second wife, Nancy Reagan. Michael, a firebrand conservative, has slammed Ron for concocting “falsehoods and lies and conspiracy theories to sell books.” (Ron and Michael haven’t spoken since the reading of the will following their father’s death in 2004.) Michael claims there is no evidence his father had developed Alzheimer’s while in office: “I saw my father on and off and I never saw anything that looked like that.” And the Ronald Reagan Library and Foundation has issued a statement noting that “this subject has been well documented over the years by both President Reagan’s personal physicians, physicians who treated him after the diagnosis, as well as those who worked closely with him daily. All are consistent in their view that signs of Alzheimer’s did not appear until well after President Reagan left the White House.”

But during his second term, Reagan did show worrisome signs of diminished mental capacity, according to Lesley Stahl. In the book she published in 2000, Reporting Live, Stahl recounts a disturbing encounter she had with Reagan in the summer of 1986. Stahl was finishing up a stint as CBS News’ White House correspondent, and she was awarded the customary farewell audience with the president. As she, her husband, and her eight-year-old daughter were about to enter the Oval Office, Reagan’s press secretary, Larry Speakes, told Stahl, “No questions at all, about anything.” Stahl was angered by this, but she soon saw why Speakes had issued this instruction. When she and her family entered the office, the 75-year-old Reagan was standing by a Remington sculpture of a rearing horse, and Stahl immediately began to fret:

Reagan was as shriveled as a kumquat. He was so frail, his skin so paper-thin. I could almost see the sunlight through the back of his withered neck…His eyes were coated. Larry introduced us, but he had to shout. Had Reagan turned off his hearing aid?

…Reagan didn’t seem to know who I was. He gave me a distant look with those milky eyes and shook my hand weakly. Oh, my, he’s gonzo, I thought. I have to go out on the lawn tonight and tell my countrymen that the president of the United States is a doddering space cadet. My heart began to hammer with the import…I was aware of the delicacy with which I would have to write my script. But I was quite sure of my diagnosis.

Stahl tried to fill the silence, telling Reagan that her daughter used to tell everyone that the president works for her mommy, but after Reagan took office, she started saying that her mother worked for the president.

I wasn’t above a little massaging. Was he so out of it that he couldn’t appreciate a sweet story that reflected well on him? Guess so. His pupils didn’t even dilate. Nothing. No reaction.

After Stahl mentioned that her husband, Aaron Latham, was a screenwriter, Reagan became animated, and pulled Latham to a couch to discuss a movie idea he had for a film in which he could star. Stahl recalls she was “too astonished to move.” A few minutes later, the session was over. Reagan was now beaming, and after Stahl and her family left the Oval Office, Reagan chased after them and told her daughter, “I worked for your mother, too.”

In her book, Stahl noted that she “had come that close to reporting that Reagan was senile. I had every intention of telling the American people what I had observed in the Oval Office.”

But she didn’t. This week, I asked her why not. In an email, she replied,

Because Reagan seemed to “recover”—I decided I could not go out on the White House lawn and tell the public what his behavior meant. So I never did a report.

I was obviously not equipped to interpret what LOOKED like a lapse into semi-awareness. Was it what I had assumed at first: senility? Was it an “act”—a way to avoid answering my questions? Was it some form of dementia (maybe not Alzheimer’s)? I decided I couldn’t report on my observations at all that night.

Later, when I would ask White House officials if they had ever seen him float away like that, they’d say yes, but that, as with me, he always pulled himself together. It was confusing for everyone.

Indeed, in her book—published 14 years after she left the White House beat—Stahl noted that after Reagan had been diagnosed with Alzheimer’s, she asked one of his chief advisers if Reagan had been senile when he was president. “Maybe there were symptoms,” this aide told her, “though I say that in hindsight. He would come to life for the cameras. He was on/off, on/off.” Several former Reaganites Stahl spoke to about Reagan’s mental conditions brushed aside any suggestion of mental deterioration. “People with Alzheimer’s don’t take down the Soviet Union,” speechwriter Peggy Noonan told Stahl. (Noonan also admitted that she had rarely seen Reagan while working for him.) But another unnamed aide said that the subsequent Alzheimer’s diagnosis “explains a lot.” He told Stahl:

He tuned out—a lot…People didn’t talk about it. People treated him with very special care. You had to explain things in elemental terms, but because he was so likable, everyone had so mush personal regard for him—everyone protected him…He was intellectually vacant, but I never felt the country was in any danger.

Stahl concluded in her book: “I now believe [Reagan aides and his wife Nancy] covered up his condition, and many continued to as they wrote their memoirs. But then, the public knew something wasn’t right. There were all sorts of signs. We all looked the other way.”

Stahl tells me that she is certain that after that Oval Office encounter with Reagan, she discussed with her producers whether to report on Reagan’s mental condition. “I would have to have skirted around the words ‘senility,’ ‘Alzheimer’s,’ ‘dementia,'” she notes. “I would have been declaring the president unfit to serve, or at least raising the possibility.” That undoubtedly would have set off a political detonation. And such a report would have suggested a White House cover-up—at a time when tense foreign policy matters were in the news and midterm elections were a few months off.

Whether or not Stahl made the right call—she seems to believe she should have reported something at the time—the evidence she later gathered indicates that Reagan aides were concerned about his mental condition during his presidency. Perhaps it wasn’t Alzheimer’s but another health issue. Yet her account and her subsequent reporting suggests Ron Reagan is closer to the truth than Michael Reagan. The Gipper was slipping while he was occupying the most powerful position in the world, and the public was kept in the dark.