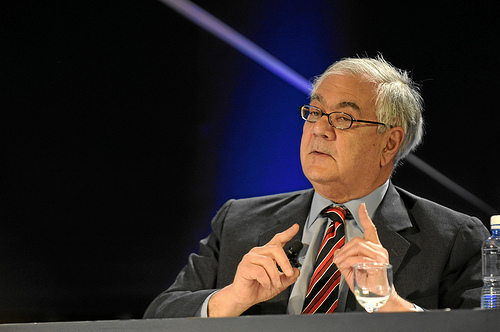 They might have relinquished their majority and coveted committee chairmanships, but House Democrats are quickly proving they’ve lost none of their savvy despite their diminished ranks. With a major battle looming over the federal government’s debt ceiling, Democrats like Barney Frank of Massachusetts are mulling a strategy that potentially could divide the GOP’s more centrist lawmakers from the party’s tea party cadre. How? By voting against legislation to raise the debt ceiling.

Why would Democrats vote against something nearly all of their party supports? As The Hill reports Tuesday, Democrats are threatening to oppose the debt ceiling bill as a way to force more Republicans to vote for a bill that many of them outright oppose. “It is up to the majority to get this bill through; they can’t duck the responsibility,” Barney Frank told the Hill. Given the dire warnings by Obama administration officials about what could transpire if the $14.3 billion debt ceiling isn’t boosted—Treasury Secretary Tim Geithner said failure to do so would cause “catastrophic economic consequences,” and White House economic adviser Austan Goolsbee predicted “a worse financial economic crisis than anything we saw in 2008″—top Republicans have all but conceded the need to increase the amount of debt the US can take on.

But some factions of the GOP, including its tea party-affiliated members, refuse to back the debt limit boost, setting the stage for an interparty battle. Rep. Michele Bachmann (R-Minn.), who launched the House’s tea party caucus, has said she won’t support increasing the ceiling. “Congress has had a big party the last two years,” she told CBS’ Face the Nation. “They couldn’t spend enough money and now they’re standing back, folding their arms…taunting us about how are you going to go ahead and solve this big spending crisis?” But at the same time, GOP budget guru Paul Ryan of Wisconsin admitted, “Just refusing to vote for [raising the debt ceiling], I don’t think that’s really a strategy…Will the debt ceiling be raised? Does it have to be raised? Yes.”

Obviously House Democrats won’t adopt this strategy if they don’t think Republican leaders like John Boehner and Eric Cantor can ultimately whip up the votes to pass the bill. If Democrats do go the “no” route, it could be a preview of their tactics for the next two years, forcing the GOP into uncomfortable positions and pitting the Republican Party’s more right-wing lawmakers against the moderates.

Here’s more from the Hill:

But rather than rallying to Obama’s side, House Democrats are remaining aloof. They say it is the GOP’s responsibility to raise the debt ceiling now that Republicans are the ones in charge of the chamber.

“I reject any attempt to shift the responsibility to the minority,” Frank said. “Don’t do us any favors.”

When asked if Democrats will whip members to pass the debt-ceiling increase as Obama has asked, a Democratic leadership aide told The Hill it is up to Republicans to get the bill through the chamber.

Republican leaders are on record as saying the debt ceiling must be raised, but whether they can get their members to go along with that remains to be seen. Their position is complicated by the GOP’s crop of 84 freshman lawmakers, many of whom ran on a strict platform of fiscal responsibility and risk being seen as sell-outs if they approve more federal debt.