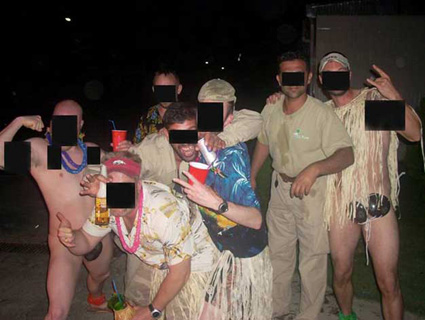 More than a year has passed since the State Department decided to drop its contract with the security firm protecting the US embassy in Kabul, following an international scandal featuring drunken debauchery fit for a Van Wilder flick. But the company that introduced the world to vodka butt-shots is still on the job—and it doesn’t seem to have plans to stand down anytime soon. Long after the expiration of its initial contract, in fact, ArmorGroup North America is currently hiring more guards to protect the Kabul embassy.

The firm sparked controversy in September 2009, when a Washington-based watchdog group sent a letter to Secretary of State Hillary Clinton highlighting a list of violations by the company, from a chronic guard shortage to the hiring of personnel who couldn’t speak English and would be unable to communicate with their colleagues in an emergency. But the most shocking charges concerned what the Project on Government Oversight called a “Lord of the Flies environment”—hazing and wild partying depicted in a series of graphic photographs showing members of the Kabul embassy security force drunk, half-naked, and engaged in an array of NSFW behavior.

Embassygate tainted not just ArmorGroup North America (AGNA) and its parent company, the security conglomerate G4S, but the State Department, too, leading to investigations by Congress and State’s inspector general. In the years leading up to the scandal, it turned out, the State Department had repeatedly found fault with the company’s performance—at one point stating in an internal memo that “the security of the US Embassy in Kabul is in jeopardy” as a result—but failed to fire AGNA. A former high-level AGNA employee also came forward to say that he’d warned the State Department about “lewd, aberrant, and sexually deviant behavior” by the company’s recruits more than two years before this conduct made global headlines. Again, no action was taken.

In December 2009, deeply embarrassed by the controversy, the State Department said it planned to axe AGNA once its contract came up for renewal that summer. But when that time came, the agency ended up extending the firm’s contract for another six months while it brought in another security provider. “Because the current KESF [Kabul Embassy Security Force] contract can only be extended through December 30th, we must have the company on the ground and operating by then,” a spokesman for the State Department’s Bureau of Diplomatic Security told Mother Jones last summer.

In late September, the agency selected the Tennessee-based firm EOD Technology to take over the contract. But December 30 came and went with no changing of the guards. And AGNA apparently believed it was staying put, at least for a while. In mid-January, the company posted a job ad on Careerbuilder noting that it was “recruiting Protective Security Specialists to provide security to the U.S. Embassy in, Kabul, Afghanistan.”

A spokeswoman for AGNA, Susan Pitcher, confirmed that the firm is still protecting the embassy, but declined to comment further, citing a State Department policy about contractors speaking to reporters. EODT also declined to comment. But a Diplomatic Security spokesman told Mother Jones that the transition has been delayed. Now, he said, the handover won’t happen until May. “In order to provide EODT with adequate time to make an orderly transition, it has been given 120 days from the end of AGNA’s contract,” the spokesman said.

“If there’s a better argument for making this mission an inherently governmental function, this situation is it.”

Sources familiar with the security force contract questioned whether the delay has anything to do with the transition process; one suggested that the State Department may merely be stalling after unwittingly selecting a replacement for AGNA that also has a controversial background.

In October, a week after the agency chose EODT for the job, the Senate Armed Services Committee, which has conducted a years-long investigation into private security firms in Afghanistan, released a report leveling serious allegations at both EODT and AGNA. It accused the companies of relying on local warlords to staff their guard forces—strongmen with unclear allegiances and possible Taliban ties. In one case, according to the report, EODT hired a group of Afghans who had recently been fired by ArmorGroup for “providing sensitive security information to…a Taliban-affiliated warlord.” (In response, EODT claimed that “all leaders which EODT utilized were made known to the US military at every stage of mobilization.” AGNA countered that it only relied on Afghans who had been recommended by special operations troops.)

Making matters worse for EODT, federal agents raided its offices in early December in connection with an investigation into potential export violations involving the transit of weapons or other military-grade materials. The company has said it is cooperating with the investigation and has denied any wrongdoing. “We obviously would not have been selected for some of the sensitive and important projects we handle for our country around the world had we not been thoroughly investigated before and found to be trustworthy,” the firm said in a statement. A State Department official said the agency was unaware the company was the subject of a federal investigation until stories about the raid appeared in the press, and insisted the probe “has not held up the transition.”

For Danielle Brian, the executive director of the Project on Government Oversight, the fact that the State Department handed the embassy job to a company saddled with its own serious baggage illustrates the flawed logic of placing contractors in roles that she believes should be performed by US government personnel. “If there’s a better argument for making this mission an inherently governmental function, this situation is it,” she says. “We’ve got one discredited company to be replaced by another discredited company.”