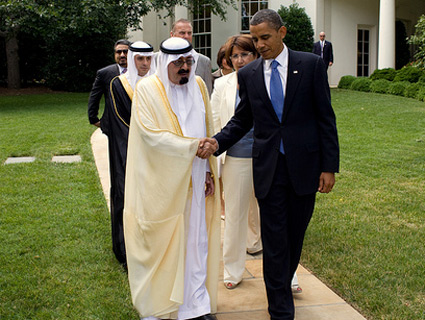 In the past few years, paranoid conservatives have cooked up all sorts of conspiracy theories about President Barack Obama. Some have claimed he has a secret plan to confiscate guns. Others have said he has a secret plan to confiscate IRA accounts. Still others have contended he’s setting up clandestine FEMA concentration camps. And, of course, there’s the big one: Obama’s is an undercover socialist purposefully trying to wreck the US economy so he can implement a dictatorial takeover. But here’s the mother of all right-wing conspiracy theories: Obama is scheming to bring tens of millions of Muslims—perhaps up to 100 million—from the Middle East into the United States in order to turn this country into an Islamic nation by the end of his second term.

Fortunately, this diabolical plan has been exposed by an American-born Israeli named Avi Lipkin, who says he once was a translator for the Israeli government, and an outfit called Special Guests, which books conservative commentators and advocates on popular television and radio talk shows. Lipkin’s website claims that since 1990 he has lectured on various topics—including the threat of Islam and Israel—in over 1000 churches and synagogues in the United Sates, Canada, England, Greece, Israel, and other countries. His bio notes that he heads the Judeo-Christian Bible Bloc party in Israel. (The party’s Facebook page listed 103 members yesterday.)

This week, Lipkin and Special Guests sent an email to television and radio bookers pitching the biggest story of all time:

According to Arabic language broadcasts intercepted and interpreted by Lipkin and his team, “The Moslem world is saying that President Obama wants amnesty for the current Hispanic 12 million illegal immigrants in the US in order to pave the way for the next wave of tens of millions of illegals from the Middle East to the United States, leading to 50 to 100 million Muslims living in the US before the end of Obama’s second term, which will be brought forth by these new US citizens voting for their savior, Obama.”

Lipkin, who also goes by the name Victor Mordechai, claims to have “a source with a senior United Nations official” (whatever that means) who says that the United States “will be a Muslim country by the end of Obama’s second term.” This grand plan is so organized that it even has three parts. Phase One: Obama foments unrest in “each Middle East country” so that these regimes are toppled and replaced by “fanatic” Sunni Mulsims, who go on to “overthrow the competing Shiite regime in Iran without involving American troops.” Phase Two: A massive exodus of Muslims heads toward Europe, Canada, and the Unites States, turning all of these Western nations into Muslim countries. Phase Three: The nations now controlled by Islamic extremists “march on Israel in an effort to destroy it” and Obama “keeps his promise…to destroy Israel.”

Of course, there’s a YouTube video (embedded below) that explains Lipkin’s scoop. It’s called, “Is Barack Obama Really A Saudi/Muslim ‘Plant’ in the White House?” The answer is obvious. The video claims that “for years before” the 2008 election, Lipkin’s wife, who worked for the Israeli government monitoring Arabic radio broadcasts, picked up broadcasts of Saudis saying, “We will have a a Muslim in the White House in 2008.” (Remember Obama’s bow before the Saudi king in 2009? Wink, wink.) The video notes that Obama has refused “to reveal” his long-form birth certificate “or anything else about his past.” (Convergence with the birthers!) The video suggests that Obama and his crew have pulled off the “greatest…scam in history” and “put an anti-American and Saudi-sponsored Muslim in the White House, thanks to a brain-dead American public and news media, both obsessed with skin color and an American Idol mentality.” The video goes on to say that in 2009 Lipkin’s wife listened to an Egyptian television broadcast featuring the then-foreign minister saying that Obama had sworn to him that he was a Muslim. Obama—according to Lipkin’s account of his wife’s account of the foreign minister’s account—also told this Egyptian official that after he finished with the health care debate, “You Muslims will see what I will do for Islam regarding Israel.”

The video does not specifically cover Obama’s secret scheme to bring up to 100 million Muslims into the United States. But isn’t that what a Saudi plant would do?

Avi Lipkin puts Glenn Beck to shame as a conspiracy theorist. But though he’s on the fringe, he’s not on his own. His video has been viewed 2.9 million times. And Special Guests is an outfit that works within the conservative establishment. According to its website, the organization has collaborated with the National Right To Life Committee, the Catholic Family and Human Rights Institute, the Second Amendment Foundation, and other conservative groups. The site boasts, “We regularly place guests on radio shows including Rush Limbaugh, Glenn Beck, Sean Hannity Radio, [and] Michael Savage.” The group says it only promotes causes that “are pleasing to The Maker, our Creator.” It asks potential clients, “What is your special message? Is it helpful to humanity? Is it God-honoring?” Apparently, it pleases God to accuse the president of covertly plotting—and implementing!—a Muslim takeover of the United States.