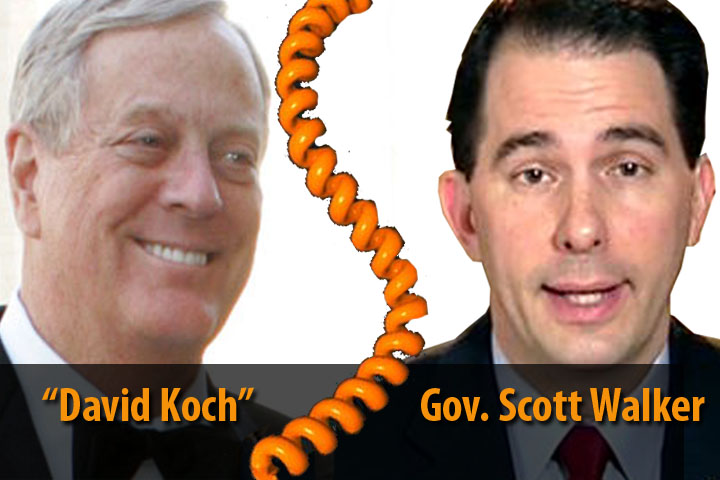 UPDATE (1): Wisconsin Gov. Scott Walker’s office confirms that the recording of a call between the governor and an alt-weekly writer posing as David Koch, one of the billionaire GOP financier brothers, is real and that it is actually Walker on the recording. The governor’s office has released a statement:

The Governor takes many calls everyday,” Walkers spokesman, Cullen Werwie said in a statement. “Throughout this call the Governor maintained his appreciation for and commitment to civil discourse. He continued to say that the budget repair bill is about the budget. The phone call shows that the Governor says the same thing in private as he does in public and the lengths that others will go to disrupt the civil debate Wisconsin is having.

The Buffalo Beast site, which organized the prank, is down, but you can hear the call below.

UPDATE (2): Ian Murphy, the guy with the catch of the week, responded warmly to our questions about his call to Walker. His comments have been added in the original post below.

ORIGINAL POST: Is that really Scott Walker? [Update: Yep.] A New York-based alt-news editor says he got through to the embattled Wisconsin governor on the phone Tuesday by posing as right-wing financier David Koch…then had a far-ranging 20-minute conversation about the collective bargaining protests. According to the audio, Walker told him:

But was it for real? Check out the details on the guerrilla caller and audio of his conversation below the jump.

According to his Wikipedia entry, Ian Murphy is a gonzo journalist and editor of the Buffalo Beast, an online mag that was founded in 2002 as an alternative biweekly by gonzo Matt Taibbi and a band of colleagues. Murphy’s probably best-known for a tough read about America’s war dead called “Fuck the Troops.” But if his latest Beast post, “Koch Whore,” is to be believed, it’s likely to be read a lot more widely.

When Wisconsin Democratic Sen. Tim Carpenter complained that Walker wouldn’t return any of the Dems’ calls, Murphy says he wondered: “Who could get through to Gov. Walker? Well, what do we know about Walker and his proposed union-busting, no-bid budget? The obvious candidate was David Koch.” Koch, of course, is one of the right-wing brothers behind Americans for Prosperity and a host of other GOP-friendly causes; MoJo‘s own Andy Kroll broke the news last week on the Koch brothers’ past support for Walker and his agenda.

So, Murphy says, he managed to have a phone audience with the governor by posing as Koch. And he taped the whole thing, copied on the videos below. What Walker says on the tape is pretty convincing…and sweeping. There’ll be no negotiations with the unions or their legislative supporters, he says; after all, he doesn’t need them:

I would be willing to sit down and talk to him, the assembly Democrat leader, plus the other two Republican leaders—talk, not negotiate and listen to what they have to say if they will in turn—but I’ll only do it if all 14 of them will come back and sit down in the state assembly…legally, we believe, once they’ve gone into session, they don’t physically have to be there.

At one point in the tape, Walker dismisses the left-leaning MSNBC. “Who watches that? I went on Morning Joe this morning. I like it because I just like being combative with those guys, but, uh. You know they’re off the deep end.” In fact, Walker did appear on Joe Scarborough’s a.m. show Tuesday; if this isn’t an authentic recording of the governor, Murphy surely nailed down the little details. But hey, that’s gonzo, right? Right?…

There are were plenty of unanswered questions, so we sought out Murphy online late Tuesday night, asking if he was still awake. “Sort of,” he tweeted us. “What do you want to know?” We emailed him a list of questions, and he responded early this morning:

Mother Jones: Okay, why should we believe you?

Ian Murphy: Why wouldn’t you? I’d send you the recordings, but they’re already online. I guess you’d have to consult an audio engineer or mp4 expert or whatever the forensic audio analysis autopsy seance kind of person. It sounds like him to me. Maybe they punked me! Maybe it was Koch who actually answered the phone. Maybe I am living a double life in my sleep as Scott Walker! It’s for real. I would have made the dialogue better and the audio worse. What, I am DARPA or some shit over here?

MJ: What number did you call to get through to Walker?

IM: I called the number on their website: http://walker.wi.gov/section.asp?linkid=1714&locid=177 I kept calling that same number, getting a busy signal, waiting through 20 rings. That Koch would suffer such indignities made it extra ridiculous.

MJ: Did you really think you’d get through?

IM: I couldn’t believe it was that easy. Or why they wouldn’t check around or something in between my calls. Or be competent. Or just not completely stupid. I blame it on the cheeseheads.

MJ: Did you ever freak out, almost lose your cool, etc.?

IM: Each time I called i presumed they be like, “Sir, we know you’re not Mr. Koch. Please fuck the fuck off.” Once Walker got on, I was more shocked than freaked. Now I’m freaked again.

He’s yet to reply; we’ll update when he does. And we’ll check with Gov. Walker’s office to see what they say, too. In the meantime, have a listen to the tapes. And tell us what you think in the comments.