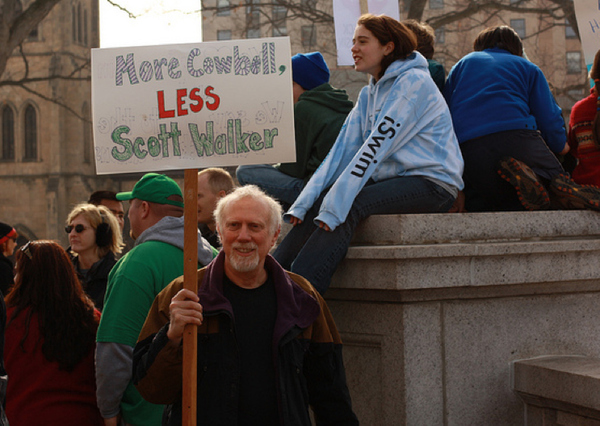 NOTE TO WISCONSIN GOV. SCOTT WALKER: If you’re going to pursue a political agenda that alienates state workers and college students, and your capital’s in a big ol’ state college town, maybe you should at least wait till summer. Or the middle of a hot Big 10 football championship race. But no, you had to announce your plan to effectively end state employees’ collective bargaining in mid-February, when classes are in, snow is on the ground, and the Packers are celebrating their title-year offseason. In other words, you gave the kids something to do. Like making and distribuin’ the three five Wisconsin-related music videos below:

1) “Wisconsin Budget Repair Bill Protest,” by Matt Wisniewski (with Arcade Fire). Don’t let the long name fool you: This moving chronicle of the protests and their organizers is destined for viraldom—in fact, it’s a lot better than anything to come out of the ’08 Obama campaign, and that’s saying something. Matt’s a 22-year-old student at the University of Wisconsin with a penchant for photo, video, and apparently, Arcade Fire.

1.5) “Wisconsin Budget Repair Bill Protest, Part II” by Matt Wisniewski (with Mumford & Sons). Spurred by the success of his first film, Matt came back Feb. 18 and 19 with an HD camera and the saccharine track “The Cave.”

2) “Firefighters at the Capitol,” by YouTube user Jessarp24. OK, it’s not exactly a music video; rather, it’s a minute-plus of pipe-and-drum awesomeness from a protester chronicling the action inside the statehouse. Why’s it important? Besides the fact that you can’t have a good rebellion with bagpipes, it reminds viewers that Wisconsin’s keepers of law, order, and public safety—the cops and the firefighters—are behind the unions and the protesters. Total number of arrests by Madison police at 5 p.m. Saturday: zero. What happened to all those lawless union thugs we’d heard all about?

3) “This Is What Democracy Looks Like,” by Peter Patau (with Twisted Sister). A simple short chronicle of one Madison march, set to the tune of “We’re Not Gonna Take it Anymore.” As Patau says, democracy doesn’t look like “your typical short network news montage headlined “State of Chaos” (NBC Evening News tonight) and giving the pro-union demonstrators and the Tea Party counter-protesters equal time, even though there were 70,000+ of the former and maybe 2,000 of the latter at best.”

4) “This Party Took a Turn for the Douche,” by Garfunkel & Oates. On its face, this rollicking, hilarious video from the L.A.-based comedy duo might not appear to relate to the labor dispute in Mad City. But ever since Andrew Breitbart, Joe the Plumber, and the Koch-financed professional right-wing took advantage of the situation to bus in their own counter-protesters, there’s been a certain something in the air…not unlike that douchy nightclub, which hours before seemed so promising, when last call comes around. Keep your eyes peeled for a Sarah Silverman cameo. Also referenced: Jim Croce, Von Dutch hats, Ed Hardy, Axe body spray, Golda Meir, Truman Capote, spray-on tanner, John Donne, Margaret Sanger. Ludicrously NSFW, but capable of producing uncontrollable chortles, nonetheless.

Readers: Got more videos we should add? Link ’em in the comments and we’ll update the post with the best ones!