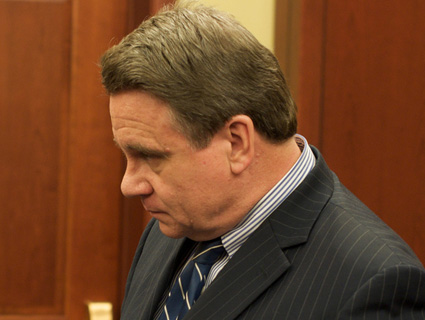 Most members of Congress spent last week’s recess back in their districts, talking to their constituents and getting a sense of what Americans want their elected officials to be doing back in Washington. But Rep. Chris Smith, a New Jersey Republican, had other plans: He spent part of the break on a taxpayer-funded trip to Kenya, where he slammed the country’s new constitution for allowing abortions in cases when the health of the mother is at risk.

Kenyan abortion restrictions go far beyond those in American law, and Kenya’s new constitution, approved overwhelmingly last August, codifies a ban on abortions in the country. But that’s not enough for Smith and US anti-abortion groups, who argue that the exception allowing for legal abortions to preserve the health of the mother “opens the door to abortion on demand.”

Smith wasn’t just meeting with Kenyan politicians and activists during his time in East Africa—he was actively politicking. On March 21, Smith spoke at an event on the new constitution sponsored by the Kenya Christian Professional Forum in Limuru, a town about 35 miles outside Kenya’s capital, Nairobi. A staffer for the US-based group Center for Reproductive Rights, which recently opened an office in Nairobi, took notes during the speech. In it, the congressman reportedly called for “a world free of abortion.” Smith also accused “pro-abortion NGOs” of having “hijacked” the maternal mortality issue in order to legalize the killing of the unborn, CRR says.

Smith’s office acknowledges the congressman visited Kenya last week as part of an official congressional delegation. Congressional delegations, or CODELs, are federally funded trips members of Congress—often accompanied by staff members—take to foreign countries to meet with government leaders and others. The trips are considered official business for members of Congress, and efforts are made to make them bipartisan. In this case, a Democratic staffer for the House foreign affairs committee joined Smith and a Republican staffer for the trip, but no Democratic members took part—an atypical arrangement.

The names of members who travel on official CODELs, as well as their expenditures, must be filed with the Office of the Clerk and reported in the congressional record. An official expenditure report has yet to be posted on the Clerk’s website, but round-trip airfares to Kenya can run in well over a thousand dollars, even if they are purchased weeks in advance, and Nairobi recently joined the ranks of the world’s most expensive cities, with the eighth-most expensive hotels in the entire world.

But Smith hasn’t always been so comfortable with the use of taxpayer dollars to intervene in abortion battles abroad. Last May, Smith, Rep. Darrell Issa (R-Calif.), and Rep. Ileana Ros-Lehtinen (R-Fla.) asked three separate government agencies to look into whether the Obama administration had violated US law in its work related to Kenya’s vote on the new constitution. Earlier that month,  Michael Ranneberger, President Obama’s ambassador to Kenya, endorsed Kenya’s constitutional reform efforts in remarks to reporters and committed to providing $2 million to support “civic education” around the referendum.

Ranneberger actually didn’t mention the word abortion, and the abortion language was just a tiny portion of a constitution that ultimately totaled more than 200 pages and won the vote of 67 percent of Kenyans. But Smith and his allies still argued that the ambassador might have violated the Siljander Amendment—a provision that bars the use of foreign assistance funds to lobby for or against abortion. “[A]ny expression of support for or opposition to the proposed new constitution…unavoidably involves lobbying for or against abortion,” the lawmakers wrote.

The Kenyan episode isn’t the first time Smith has involved himself in the abortion policies of African countries. In 2005, Ethiopia changed its criminal code to decriminalize abortion in cases of rape or incest; where the health or life of the mother was at stake; when fetal abnormalities were apparent; for minors; and for women who have physical or mental disabilities. Smith wrote a letter to the Ethiopian Embassy opposing the change, and in a 2007 speech, Smith criticized Ethiopia’s revised statutes as “legalization of abortion on demand.”

Smith’s office did not respond to requests for comment about his speech in Kenya or the purpose of the trip. But calling for a “world free of abortion” is certainly consistent with the congressman’s record. Stateside, Smith has offered the “No Taxpayer Funding for Abortion Act,” a bill that would drastically alter the shape of US abortion law (and would have changed the definition of “rape,” among other radical measures). Aram Schvey, counsel for foreign policy and human rights at the Center for Reproductive Rights, says Smith is trying to “push an agenda that wouldn’t be constitutional here” in Kenya.

The changes to Kenya’s constitution have been a cause célèbre for American anti-abortion groups for over a year. The American Center for Law and Justice (ACLJ), founded by televangelist Pat Robertson, has been among the most vocal opponents of the new constitution. Last year, ACLJ pledged to spend “tens of thousands of dollars” on the effort to defeat the constitution and even opened an office in Nairobi, the “East Africa Centre for Law and Justice,” in January 2010. “We’re looking long-term in Kenya because it’s such an influential country throughout Africa,” the group’s director of international operations, Jordan Sekulow, told Christianity Today.

Smith, for his part, weighed in with a September 2010 op-ed in the Washington Times, arguing that the constitutional exception was not actually intended to save women’s lives:

A parliamentary committee proposed language in an early draft of the constitution that would have enshrined the current law. But a “committee of experts” created exceptions to allow abortion for other “emergency treatment,” for the “health” of the mother or even if “permitted by any other written law.” The committee also reinserted an undefined right to “reproductive health care” after it had been removed by the parliamentary committee. Anyone familiar with how our own Supreme Court discovered a previously unknown right to abortion in the U.S. Constitution knows that these terms will be seized upon to impose abortion on demand in Kenya.

Abortion-rights advocates counter that access to abortions is very much a human rights and public health concern, particularly in Kenya, where 2,600 women die and another 21,000 are hospitalized each year due to complications from unsafe abortions, according to figures from CRR.

While US-based abortion opponents are still fixated on the legal change, the new constitution is remarkably popular in Kenya, where it is seen as a sign of national unity in a country that was wracked by violence following a disputed presidential election just two years ago. “This was considered frankly a rather conservative statement about abortion, limiting it to only a few cases,” says Joel Barkan, a senior associate with the Center for Strategic and International Studies. “Since then the whole thing has been moot. The clause on abortion is so restricted. It’s become a non-issue.” Except, it seems, for Smith.