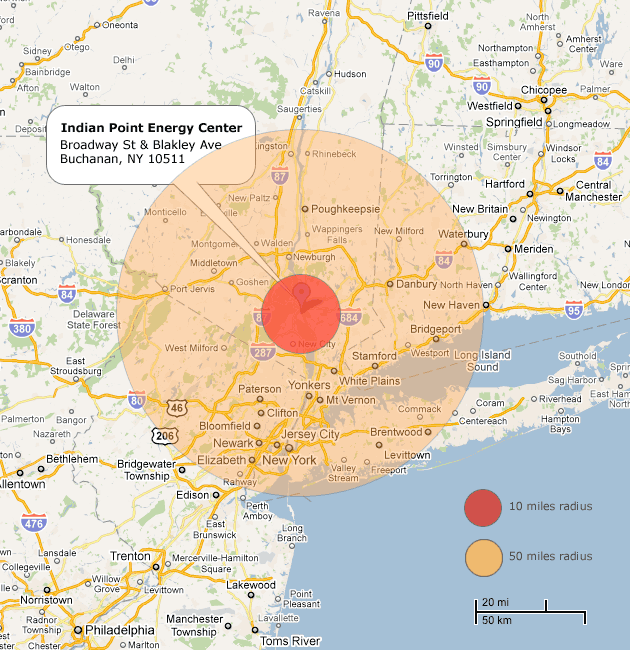 Last Friday, New York Gov. Andrew Cuomo announced that he wants to see the Indian Point nuclear power plant, located 38 miles from New York City, shut down. “This plant in this proximity to the city was never a good risk,” he explained. Cuomo was hardly the first person to express concerns about the plant, which supplies power to New York City and its suburbs. A day before the governor’s statement, the nearly four-decade-old site was one of 14 US nuclear plants cited for safety “near-misses” in a report by the Union of Concerned Scientists. Which raises the question: What should New Yorkers do if a Japan-like emergency were to hit Indian Point?

Recently that question got a lot more complicated. The Nuclear Regulatory Commission (NRC) currently sets the evacuation zone around American nuclear power plants, also known as the “Plume Exposure Pathway Emergency Planning Zone,” at 10 miles. Japanese authorities have evacuated residents living within about 19 miles of the damaged Fukushima Daiichi Nuclear Power Plant. But US officials have urged all Americans within 50 miles of the troubled Japanese reactors to get out of the way. Does this contradictory advice mean that our 10-mile emergency plans need to be revisited?

NRC Chairman Gregory Jaczko, in an appearance on CSPAN on Sunday, defended the 10-mile zones, noting that sites in the US don’t have as many reactors as the Japanese plant and that the plans are meant only for the immediate response. “What we want to do is build a system that we know at 10 miles we can activate that system quickly and we can mobilize it quickly,” said Jaczko. “We always appreciate that there may be circumstances where we have to expand that if necessary.”

But the US government’s advice to keep 50 miles away from Fukushima has “opened up a Pandora’s box,” says Edwin Lyman, a senior scientist with the Union of Concerned Scientists who focuses on nuclear power and security. The group has previously argued that the zones need to be reevaluated. “This is certainly going to raise questions about the safety of those who live more than 10 miles from the plants in the US.”

Widening the evacuation zones to 50 miles around the United States’ 104 plants would affect a number of densely populated areas. The Indian Point zone would, of course, then include all of New York City—meaning that the 21 million people in the 50-mile radius might need to relocate in case of a serious emergency. Maryland’s Calvert Cliffs Nuclear Power Plant is nearly 50 miles from Washington, DC, home to 500,000. The McGuire Nuclear Station is just 17 miles from Charlotte, North Carolina, which has 730,000 residents. (See our chart below to see how many cities and towns are located within the 50-mile zone, or check out CNN’s map that lets you see how close you live to a nuclear power plant.)

I grew up a little less than 20 miles from the New Jersey’s Salem Nuclear Power Plant and Hope Creek Nuclear Generating Station, which have three reactor units between them. (The Hope Creek generator is a GE Mark 1 boiling water reactor, the same model as those that are currently in distress in Japan.) The plant is also about 50 miles from Philadelphia, with a population of 1.4 million. Philadelphia also has the Limerick Nuclear Power Plant just 21 miles northwest of the city.

I lived outside the 10-mile evacuation zone for the New Jersey power plant, but my friends on the other side of the line had siren systems in their neighborhoods, did regular evacuation drills, and received updated information every year explaining the emergency evacuation plans. There were also plans in place to distribute potassium iodide to those in the zone in the event of an emergency. The Baptist Bible summer camp I attended was inside the zone, which meant that every year all of us campers had to practice an evacuation drill. The emergency siren would go off and we would all line up at the flagpole. Then we’d board a big yellow school bus and drive away, ostensibly to safety somewhere outside the evacuation zone. Even as a child, I was a little confused about the whole thing: If something really bad happened, where would we go, and how would we even know that a bus would actually come pick us up, anyway? Moreover, what were the people right on the other side of that 10-mile radius supposed to do?

Setting 50 miles as the new standard evacuation zone “would be an enormous challenge,” says the UCS’s Lyman. Not only would officials have to devise a plan to move hundreds of thousands of additional people, they’d also have to educate many more residents and local emergency responders who probably aren’t even aware that they live relatively close to a nuclear power plant. It would also complicate things for the nuclear industry. The Nuclear Energy Institute, the industry’s lobbying group here in the US, pushed back on noting that the 50-mile zone was necessary in Japan, stating last week that it had “questions about the scientific basis” for issuing that advisory. A look at the locations of nuclear power plants across the country makes it clear that changing the zone would present significant logistical questions, to say the least:

Click on the table’s headers to sort the data.

Chart made using data from the Nuclear Regulatory Commission. Note: Not every city in the radius of each power plant is listed; some plants have more than one city within 50-miles.