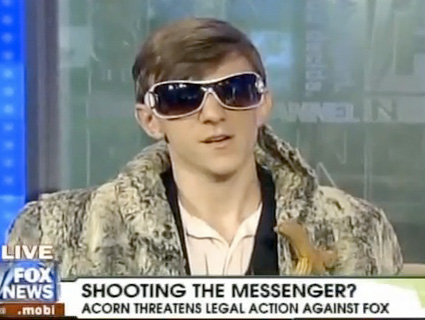 To the list of journalism’s greatest disgraces, let us now add James O’Keefe. O’Keefe calls himself an investigative reporter, though as far as we can tell the only group of journalists he has anything in common with are habitual fabricators like Jayson Blair, Stephen Glass, and Janet Cooke.

But that’s not the scandal we’re talking about. The real scandal is that—even though by the time he posted a “sting” of a top NPR fundraiser, O’Keefe was notorious for creating deceptive video smear jobs (ACORN? Hello?)—the media repeated the allegations uncritically. Let’s review.

O’Keefe’s “scoop” debuted March 8 on the conservative Daily Caller. Edited down from a 2-hour conversation, the 12-minute clip purports to show NPR head fundraiser Ron Schiller wooing fake prospective donors who claimed to be part of a group with ties to the Muslim Brotherhood. To curry favor, Schiller slags tea partiers, calling them xenophobic and racist; he also says NPR could get by without federal funding.

Republicans in Congress were already gearing up to defund NPR, but even that timing doesn’t seem to have raised red flags with the media. The story was breathlessly repeated by such mainstream reporters as Ben Smith of Politico, Dave Weigel of Slate, James Poniewozik of Time, and many others. Did they mention that O’Keefe had doctored tapes before? Sometimes. Did that cause them to hold off before passing on his sizzle reel? No.

Within 36 hours, NPR had dumped both Ron Schiller and its successful CEO, Vivian Schiller (no relation). Twenty-two NPR journalists, from Robert Siegel to Nina Totenberg, signed a letter expressing outrage at the “appalling” comments. Twenty-two journalists assumed that a tape made by a known tape-doctorer accurately represented the comments of their co-worker. Scott Simon of Weekend Edition piled on, tweeting, “Conduct of NPR execs is disgusting. They dishonor a name built by great journalists.”

It wasn’t until March 10 that an article on Glenn Beck’s (!!) site, the Blaze, reviewed the full tape (which O’Keefe had posted online—guessing, correctly, that reporters wouldn’t bother to watch it) and found massive deceptive editing. Schiller, it turned out, prefaced his comments by saying he was proud of having been raised a Republican; in saying tea partiers were racist, he was paraphrasing other GOPers; a laughing “That’s what they said?” referring to a restaurant was moved to suggest that he was making light of the fake group’s commitment to sharia.

By the time the Blaze‘s critique made its way around the internet, though, half the press corps—including many media critics—was headed to the SXSW convention in Austin, and the other half was busy with disasters in Japan and uprisings in the Middle East. Weigel and Smith posted detailed mea culpas (Smith later said he’d been “slipshod”); Poniewozik followed up, as did USA Today and The Atlantic’s Andrew Sullivan, but otherwise the major media failed to correct the record until after the defunding vote.*

Why was this? Simple: A good lie is by definition a hot story—crafted and timed to hit an urgent issue at just the right moment—and in a 24/7 news cycle, that presents a compelling incentive to reporters: “Let’s be brutally honest,” Weigel told NPR when it finally got around to forensics six days later. “The rush is to get traffic and to get the people of your organization booked on shows to talk about it. [That] leads you to not do the rigor and fact-checking that you do in other situations.” And by the time you do, everyone’s moved on.

Now let’s contrast the O’Keefe saga with the story of another “citizen journalist” with a video camera: Mohammed “Mo” Nabbous, a 28-year-old engineer in Benghazi, Libya. In February, Mo joined the uprising against Muammar Qaddafi; but instead of taking up weapons, he grabbed his cellphone and started broadcasting. Day after day, he live-streamed everything from phone interviews to footage he’d gathered around town, becoming a key resource for many of the other journalists covering the rebellion. Watching him was a visceral experience—this smart, funny, Oxford-accented guy who looked like he hadn’t slept in two months, pointing his camera at burning power plants. Like O’Keefe’s videos, Mo’s work was “underground,” but there the similarity ends: Mo didn’t conceal what he was doing, despite the obvious risks. His reporting was uncut, unvarnished, and unfiltered by anything except his own anger and hope, and it was clear watching him work that he wanted the truth, wherever that took him.

On March 19, the day after Qaddafi had declared a cease-fire, Mo heard explosions. People said tanks were advancing on Benghazi. But Mo didn’t want to just pass that along; he went out to report. He recorded himself as he rode around on the back of a pickup—you can hear minute after minute of the thud of artillery shells, the crack of machine guns, Mo’s rapid-fire voice in English and Arabic. Then, suddenly, silence.

Mo’s widow, who is expecting their first child, released the tape a few hours later.

That’s journalism. The other stuff is hackery.

*On March 22, New York Times media columnist David Carr detailed the flaws in the initial reports. Yet as recently as March 25, Times editor Bill Keller, in an essay devoted entirely to factchecking (and scolding the rest of the media for prioritizing speed over accuracy), characterized the incident as one where O’Keefe (who’s not actually in the video) posed as a donor to “entrap a foolish NPR executive into disclosing his scorn for Republicans and the Tea Party.”