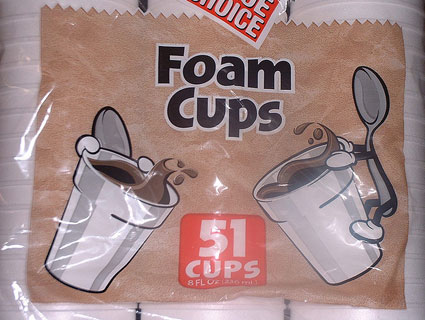 A bit like the Republican party, they are white, seemingly indestructible and bad for the environment. But after an absence of four years, foam plastic coffee cups have made a comeback in the basement coffee shop of the United States Congress building after Republicans began reversing a series of in-house green initiatives undertaken by Democrats.

The about-turn was announced by a press aide to John Boehner, the speaker of the House of Representatives, who tweeted on Monday morning: “The new majority—plasticware is back”.

When the Democrats held the house, the former speaker Nancy Pelosi put the cafeterias at the center of a plan to hugely reduce the carbon footprint of Congress.

The ancient power plant in Washington DC a few blocks from the Capitol building, which provides heating and cooling for Congress and the supreme court, was converted from coal to natural gas. Compact fluorescent lighting and energy-efficient vending machines were introduced.

In the cafeterias, polystyrene packaging was replaced with trays and utensils made of biodegradable corn starch. Four separate stations were installed for recycling and sorting. A healthier menu was also introduced in 2008, offering cage-free eggs and antibiotic-free beef.

Items deemed compostable waste, such as coffee cups, were sent to a pulper in a lower basement, which squeezed out all the liquid before dispatching the material by truck to a commercial composting site in the suburbs of Washington DC.

There, the waste was mixed with soil, which eventually returned to Capitol Hill to be used as fertiliser on the grounds. Hundreds of tonnes of waste was saved from landfills yearly, Democrats said.

But the new green cafeteria was not universally popular—even when Democrats were in charge. Diners complained the cutlery would bend or break on the point of contact with solid food.

Once Republicans were back in charge of the house, with their suspicion of environmental protection, the days of compostable coffee cups were numbered.

Dan Lungren, chair of the house administration committee, said the $475,000 per year program was too expensive and not even green. “After a thorough review of the house’s composting operations, I have concluded that it is neither cost effective nor energy efficient to continue the program,” he said in a statement on his website.

Next on the Republican agenda of environmental retro moves? Lightbulbs. House Republicans introduced a bill last week to repeal the government’s decision to phase out the old energy-inefficient bulbs, which was due to start in 2012.

Environmental organisations condemned the return to plastic. “They are willing to undo progress when they should be looking at getting their own house in order. ” said Tony Iallonardo of the National Wildlife Federation.