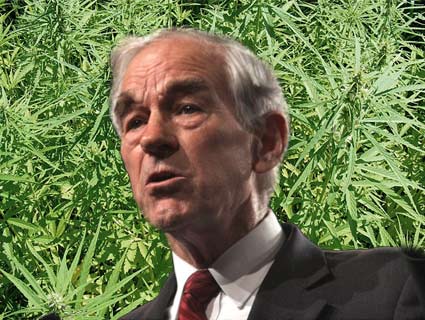 Though the recession triggered the current budget stalemate in Congress, its roots can be traced back to Rep. Ron Paul of Texas and his quixotic bid for the 2008 Republican presidential nomination. While his campaign didn’t win a single primary, the Ron Paul Revolution minted a new generation of libertarian activists and his supporters helped lay some of the organizational and ideological groundwork for the tea party movement that swept in a raft of small-government legislators last fall, including Paul’s son, Republican Senator Rand Paul of Kentucky.

For the first time since I began writing about Paul and his movement more than three years ago, he agreed to speak with me over the phone yesterday. The occasion was his desire to talk about his support for legalizing industrial hemp. Hemp, a non-psychoactive variety of cannabis famously grown by the likes of George Washington and promoted in the World War II propaganda film Hemp for Victory, is an envrionmentally-friendly source of fiber and protein. Paul is the author of several hemp legalization bills, the latest of which will be promoted in May during the second annual Hemp History Week.

Rep. Paul spoke with me about why the federal ban on the super-fiber is further evidence of “government stupidity,” how liberals and libertarians can cooperate in the budget debate, and his plans for 2012.

Mother Jones: Hemp is a natural, eco-friendly fiber with a wide range of industrial uses, none of which involve getting high. So why has Congress been treating it like an illegal drug?

Ron Paul: Because they don’t have any common sense and they don’t know what they are talking about and it’s sort of an hysterical reaction to the drug war. If they had any sense at all they would just legalize it like it was for most of our history. So it is rather bizarre.

MJ: Your son, the freshman senator Rand Paul, also supports legalizing hemp. But why don’t more of his colleagues in the Tea Party Caucus, which is supposed to stand for getting government out of the way of economic growth?

RP: I think they are intimidated because they’ve built up this idea that it’s related to drugs. I mean, it was a consequence of the drug war that this happened. But it just doesn’t make any sense. So I don’t know. I do my best. I introduced legislation. We talk about it a lot. And it would be an economic benefit to all of us to have it. Why should we allow products to be made in Canada and then we buy the products made out of hemp and they come back into the United States?

“I think I probably have more allies from the progressive side when we talk about how to get the budget under control.”

It would be a good crop. If we really needed ethanol, maybe ethanol from hemp might be beneficial. But no, we subsidize one thing and make the other stuff that might be useful illegal. So I hope someday that the people wake up, because the Congress is asleep. They assume that that the average person supports the idea that hemp should be illegal. But quite frankly, I think the average person doesn’t know. If they knew more about it, they would support my position of legalizing it.

MJ: Libertarians don’t always agree with progressives, but there’s more overlap than many people realize. Where else do you think that both groups can work together to get things done in Congress this year?

RP: I think I probably have more allies from the progressive side when we talk about how to get the budget under control. In spite of the image of most progressives—and there are some who don’t really worry about the deficit—but there are some serious-minded progressives who would like to cut back and pay the bills. And where we agree on that is the foreign adventurism. Not so much on the domestic spending.

As a libertarian, I don’t endorse philosophically the many domestic programs and I’m willing to work on a transition. So I say: Let’s cut the unnecessary wars. Let’s cut the foreign aid. Let’s cut all the empire building which costs trillions of dollars and maybe we could tide ourselves over. But for some conservatives to start tinkering with the budget with health care or education for the poor, that doesn’t make any political sense to me.

MJ: You’ve done phenomenally well in GOP presidential straw polls, and there’s a lot of speculation about whether you’ll run again for president in 2012. If you do, how will you appeal to Democrats who voted for Barack Obama in 2008?

RP: I would just hope that the power of the message would take care of itself. I see some candidates or potential candidates are already directing their attack at Obama. But I think it’s very clear to the serious-minded liberals and progressives and increasingly even on our side, the conservative side, that we should be skeptical of the wars overseas. So I certainly would use that issue, the spending, the deficit, the foreign adventurism. There’s no difference between the parties.

And also on the civil liberties issue: The secret trials and endorsement of assassination and the events of that sort that should displease all Americans. Even today they are talking about Homeland Security announcing that it’s their policy that they can monitor and infiltrate any peace group or any group that they want.

MJ: Yeah, it may have fallen under the radar with all the economic news that the Patriot Act remains in full swing.

RP: And yet they said we would move in the opposite direction. The American people get really tricked into believing that there is a lot of difference and therefore you have to pick the lesser of two evils. But ultimately policies march on, whether it’s the Federal Reserve, the spending deficit, the welfare state, the world empire. Policies remain the same. Tone is different and the power struggle is real, but the policies don’t change.

MJ: The new crop of tea party congressmen has pointed out some of those same concerns, but how much real change are we going to see?

RP: I think they serve a very valuable function in calling attention to a lot of these things and I think they are sincere in wanting to cut back. I think the tea party movement probably doesn’t as strongly as I do endorse the idea that we look at some of the military spending.

The bigger problem is the difficulty in shifting gears. Some people say all you have to do is deal with waste and fraud. Well, we have to deal with much bigger things than that. We have to deal with the philosophy of government, the role of government in a free society. The Constitution gave us a pretty good outline. And there is no respect for the Constitution. Cutting things out now is practically impossible because even though a lot more people want the cuts, there’s an even larger number that don’t want their special programs cut.

MJ: Do you think hemp legalization could become an electoral issue, or is it destined to remain the kind of thing that libertarians and liberals dream about together on websites?

RP: I use it quite frequently as an example of government stupidity. And I am sure I get credibility for this, especially with the young people, because that’s where I get my strongest support. Whether this could be the issue, it’s not going to surpass inflation and the economy and jobs and the Federal Reserve and the national debt and war. I think that it’s going to be down on the ladder. But there’s no reason that it can’t be used frequently and help to make the point: If you are concerned about the economy, then why are we doing these dumb things?

MJ: When are we going to learn whether you are running for president?

RP: Well, in a couple of months—two, three, four, five. I don’t know. I think about it and I contemplated it and having given up on the thought of maybe doing it. But it’s gonna be a little while.