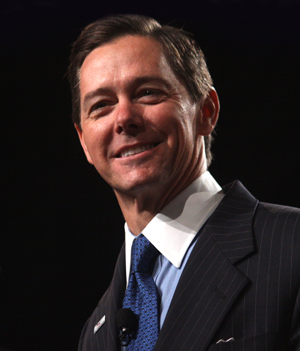 With just 610 days to go before election day, GOP presidential candidates gathered at Point of Grace Church in Waukee, Iowa Monday night for their first candidate forum of the 2012 race. Or at least some of them did—Mitt Romney took a rain check; so did Mitch Daniels, Haley Barbour, Sarah Palin, and Mike Huckabee (among others).

So what did the candidates who did show up talk about? Nothing particularly groundbreaking. They bragged about their children and grandchildren, the strength of their marriages, quoted scripture, and generally stayed within their individual comfort zones. Newt Gingrich lectured on Camus and Israel and American Exceptionalism—the latter two of which he believes are being ignored by the Obama administration; Buddy Roemer spoke bluntly about cutting off oil and ethanol subsidies; Herman Cain delivered the equivalent of a PowerPoint presentation, explaining how he’d fix the country in three simple steps; Tim Pawlenty gave the same stump speech you’ve already seen on YouTube, delivered with a hockey-coach-as-slam-poet cadence; Rick Santorum talked extensively about partial-birth abortion, and how his kids once thought his first name was “ultra” (good thing they didn’t Google it).

If you’re looking for a quick analysis, Dave Weigel’s grades struck me as pretty spot-on. But in reality, the night was less about the five would-be candidates who showed up, than the man they were there to see: Faith and Freedom Coalition founder Ralph Reed. Just five years after his political career imploded amid the Jack Abramoff scandal, the former head of the Christian Coalition and GOP boy wonder has clawed his way back into the role of Republican kingmaker. The 2010 midterms were something of a trial run for Reed, who rode the tea party wave with his new organization, and then rushed into the post-election autopsy to take credit for everything.

Last night, he used his introductory speech to ask for money—”every dollar that you give tonight will stay in Iowa”—and to solidfy his role central in the nominating process. “Some have suggested that we call a truce on the social and moral issues,” Reed said. “I don’t know about you, but I prefer to have a leader who can walk and chew gum at the same time.” Reed has re-emerged as a GOP power-broker by acting as if the past never happened. And for the men on stage, that just might be a good thing; if social conservatives can look past Ralph Reed’s transgressions, there might be hope for Gingrich after all.