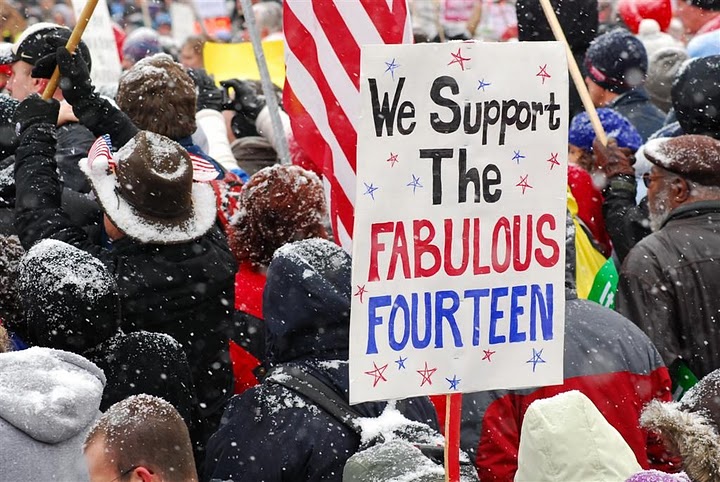 The deed is as good as done.

On Thursday evening, the Wisconsin Assembly, the state’s lower legislative chamber, passed a rewritten version of the controversial “budget repair bill” that would strip most public-sector unions of their collective bargaining rights, in effect gutting organized labor in the state. The bill now awaits the signature of Republican Governor Scott Walker, whose original bill sparked weeks of protests in the streets of Madison and the halls of the state capitol building.

So where do labor unions, Democrats, and anti-Walker protesters go from here?

Democrats are already challenging the legality of the bill’s passage in the Assembly and Senate. Democrats have asked (PDF) the Dane County district attorney to investigate whether Wednesday night’s vote in the state Senate violated the state’s Open Meetings Law; that law requires 24-hours’ notice of “every meeting of a governmental body,” and in the case of rushed meetings, two hours’ notice at the very least. The state Senate’s chief clerk, however, said (PDF) proper notice was given for the vote, in which 18 Senate Republicans voted in favor and one GOPer, Dale Schultz, voted against the bill.

That vote, of course, took place without the 14 Senate Democrats who fled the state on February 18 to block such a vote. They did so because the constitutionally mandated quorum for all bills relating to state finances requires at least one member of the minority—in this case, 20 votes. However, acting on legal advice, state Republicans on Wednesday rejiggered Governor Walker’s “repair” bill so that it was, in their eyes, not a financial bill and thus didn’t require the 20-vote quorum after all. Assembly Democrat Jon Richards, among others, is arguing that the bill was indeed a financial one, and wants a review of whether the Assembly’s vote on the bill was legal if the Senate passed it without the necessary quorum.

If those legal challenges are shot down, we’ll likely see the return of the 14 Senate Democrats who fled the state on February 18 to block a vote on what they believe is a financial bill. One of those senators, Chris Larson, said on Thursday he’d be back in Wisconsin “soon.” The Democrats’ return would mark a pretty significant defeat for pro-labor groups, who pinned their hopes of beating back Walker and his GOP allies on keeping the “Wisconsin 14” out of the state.

There could also be walk-outs, and possibly even a general strike, after Walker signs the “repair” bill. The president of Madison’s firefighters union said on Wednesday he supported a general strike, and a labor umbrella group in Madison, the South Central Federation of Labor, endorsed the idea of a strike as early as Feb. 21. Striking or walking out, however, comes with a big risk: Buried in Walker’s retooled bill, as I first reported, is a provision giving state officials the power to fire employees who strike or walkout, so long as the governor has declared a state of emergency.

Then there’s the April 5 election for the Wisconsin Supreme Court, the first election in the aftermath of the Madison protests. Organizers and politicos tell me they see the Supreme Court race, pitting Democrat JoAnne Kloppenberg against Republican David Prosser, as a test of whether the energy of the past few weeks can translate into support at the ballot box. A veteran assistant attorney general, Kloppenberg is the underdog in the race, squaring off against the conservative Prosser, a current Supreme Court justice who handily won a four-way primary in February to decide the final two candidates. In that February primary, Prosser claimed 51 percent of the vote, with Kloppenberg at 28 percent. Of course, since that vote, public opinion has shifted significantly away from Walker, so if Democrats can connect Prosser to the governor and his unpopular “repair” bill, they might unseat the conservative front-runner.

And gathering momentum by the day are campaigns to recall Wisconsin lawmakers, in particular Republicans in swing districts. The Progressive Change Campaign Coalition and Democracy for America have raised upwards of $750,000—they drummed up $200,000 on Wednesday night alone—for TV ads in support of a recall campaign targeting three GOPers: Sens. Randy Hopper, Alberta Darling, and Dan Kapanke. MoveOn.org says it has also raised $825,000 for its recall efforts in Wisconsin.

But even with fundraising hauls like those, progressive groups are fighting an uphill battle, as history is very much against them. In the Badger State’s 162-year history, only two lawmakers have ever been successfully recalled.