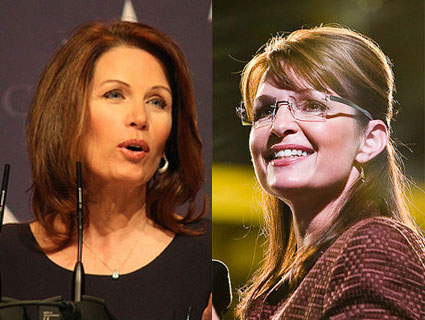 At first glance, you might think you were seeing double. Sarah Palin and Michele Bachmann are both hard-right Republican firebrands with a populist touch, a love of the spotlight, and devoted throngs of conservative followers. Though both have been regularly shunned by the Washington establishment, they’ve proven to be prodigious fundraisers who’ve competed for the title of “Tea Party Queen”—and have been floated as presidential contenders. The two even bear a passing resemblance to each other.

But though Palin and Bachmann may seem like GOP doppelgangers, there’s a lot separating them as well. And the differences have led a growing chorus of Beltway watchers to conclude that Bachmann would actually be the more credible candidate of the two. Having watched the Minnesota congresswoman on the trail for years, Minnesota political operatives on both sides of the aisle warn against simply laughing off Bachmann. “You underestimate Michele Bachmann at your own peril,” says Zach Rodvold, the campaign manager for her Democratic opponent in 2010.

Bachmann is expected to form a presidential exploratory committee in the next few months and has already trekked out to Iowa to make early inroads. Though the Minnesota Republican remains a longshot, she also could finally give tea party types a candidate to rally behind in a decidedly lukewarm GOP primary—and could be a (relatively) more formidable candidate than the former governor of Alaska. Here’s why:

1) Bachmann’s an organizer. Palin may have a huge following, but it’s been built on the celebrity status and enormous platform she gained as Sen. John McCain’s running mate. Bachmann, by contrast, originally got involved in politics as a grassroots organizer—and she’s used those skills to build up ground-level support and attract allies at every stage of her career. In the 1990s, she first garnered attention by organizing anti-abortion protests in the St. Paul area, then moved on to fight state regulation of education as a home schooling advocate. After entering the Minnesota state Senate in 2000, Bachmann organized religious leaders in the state to lobby for a ban on same-sex marriage.

So while Palin may be remain the tea party’s beloved figurehead, she generally keeps to sending tweets and Facebook missives from on high. Bachmann, by contrast, proven her ability to get her hands dirty and organize mass gatherings on the ground level—which could be a particular boon to her candidacy in states that rely on caucus-driven primaries like Iowa and to her outreach efforts elsewhere.

2) Bachmann has a sense of humor. Both Palin and Bachmann frequently make inflammatory statements and attention-grabbing gaffes that make headlines for days. But Palin has a habit of hyping up her victimization at the hands of the media—and anyone else deemed to be an enemy—and refusing to let go of any perceived slight. In the wake of the Tucson shooting, Palin accused her critics of “blood libel” after she was attacked for putting crosshairs on a 2010 campaign map, igniting yet another media firestorm. Palin’s addiction to feuding has made her enemies on both sides of the aisle.

Bachmann takes pot shots against the press as well, but she doesn’t dwell on bad ink. On occasion, she’s even willing to admit that she’s erred and frequently pokes fun at herself before moving on. After recently misidentifying the state where the battles of Lexington and Concord took place, Bachmann told Laura Ingraham: “I made a mistake. I should’ve said Massachusetts rather than New Hampshire. But you know, that’s the way it goes and we had a great trip and I was glad to be able to be there.” Similarly, after Bachmann gave the tea party’s response to Obama’s State of the Union address this year, she was widely mocked for a glitch that had her looking into in the wrong camera; Saturday Night Live even parodied the moment. Bachmann’s response? She cracked a joke about the incident at her next speech before a big crowd. “Someone told me I needed to find the right camera. So let me see… Okay, all you SNL fans, I know where it is!”

3) Bachmann’s better at thinking on her feet. Thrust onto the national stage with little experience or policy expertise, Palin became notorious for her missteps in media interviews and debates during the 2008 campaign. When ABC’s Charlie Gibson asked whether she supported the Bush doctrine of foreign policy, she gave a blank stare. She famously flubbed her interviews with Katie Couric and baldly misrepresented John McCain’s basic policy views in her debate with Joe Biden.

Bachmann hasn’t been put under the same national magnifying glass—and she’s made plenty of gaffes of her own—but she has managed to hold her own during her re-election campaigns. During Bachmann’s first debate against then-state senator Tarryl Clark—her most formidable Democratic opponent so far—she came across as poised and confident, deflecting the shots that came her way. She pounced when Clark hedged on her position on card-check—the controversial proposal that would make it easier for labor unions to organize. And when Clark tried to nail her for failing to support pay-as-you-go budgeting rules, Bachmann simply ignored the question and stayed focused on her big-liberal-spending talking points.

Even Bachmann’s opponents are willing to recognize her skills. “She’s polished, charismatic, and engaging and comes across as being well informed even though she often is not,” says Rodvold, Clark’s 2010 campaign manager. “She sounds knowledgeable, she sticks to her message, and repeats it.”

4) Bachmann knows how to use the national media. After her disastrous experience during the 2008 campaign, Palin has shunned the “lamestream” media, appearing almost exclusively to Fox News, where she’s a paid analyst. When not on Fox, Palin primarily communicates via Twitter and Facebook, giving her control over her message but limiting her reach and credibility. Altogether, she’s confined herself to settings where she’s assured an extremely sympathetic audience—or one-way relationships.

Bachmann, by contrast, not only appears on Fox News, but also regularly faces down her adversaries on the networks as well, appearing on MSNBC’s Hardball and going head to head with James Carville and then-Rep. Alan Grayson (D-Fla.) on Larry King. On the Hill, Bachmann regularly holds high-profile press conferences outside the Capitol building to entice camera crews to attend. To be sure, Bachmann more often appears on TV shows where she’s assured a sympathetic host. And after press conferences are over, she quickly takes off before most reporters have time to catch up with her. But in the end, Bachmann understands that the “lamestream media” is not just a liability.

5) Bachmann’s not a quitter. Palin abruptly left office only halfway through her term as governor, claiming that she had a higher calling and that the politicized attacks had crippled her authority—but giving the distinct impression that she didn’t care for the dirty work of governing. Bachmann may crave the same national profile, celebrity, and megaphone. But she’s also wise enough not to have quit her day job just yet.