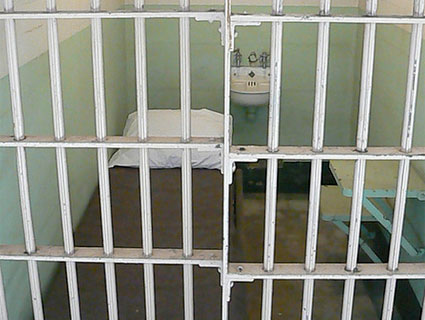 Last August, two prisoners escaped from an Arizona penitentiary and fled to New Mexico, where they ambushed a couple, shot them to death, and lit their bodies on fire inside a trailer.

These fugitives didn’t escape from just any facility: They were housed in a privately run prison managed by the Utah-based Management Training Corporation. After the incident, a review by the Arizona Department of Corrections concluded that the prison had poorly trained staff and deficient equipment—including a faulty security system that emitted so many false alarms, the prison staff simply ignored it.

Episodes like this have raised concerns about the privatization of prisons, with critics long arguing that such facilities pose a threat to public safety and don’t save states much—if any—money in the long run. They also argue that such facilities pose a perverse incentive to keep people locked up. Still, the nation could soon see a major private-prison boom, as Republican governors and legislators across the country push privatization proposals to address budget shortfalls.

In Ohio, Gov. John Kasich has proposed selling five prisons to private companies—a move that would bring in an estimated $200 million up front—while Louisiana Gov. Bobby Jindal plans to sell three state prisons to private operators. In Florida, the GOP-controlled Legislature is making an even broader push, hammering out a budget bill that would require the state to privatize the prisons in South Florida, where one-fifth of the state’s 100,000-plus inmates reside.

Likewise, Maine’s new GOP governor, Paul Le Page, has vowed to bring private prisons to his state for the first time, backing a bill that would also allow Maine to house out-of-state prisoners. In Texas, where prison privatization began decades ago, Harris County is now deliberating a plan to privatize the state’s largest jail. And in Minnesota, Republican state lawmakers have introduced a bill that would require the state to solicit offers from private companies to manage the state’s inmates.

The prison industry saw a big boom in the 1980s and 1990s, but growth slowed during the recent recession. Strapped for cash, state corrections agencies have been trying to squeeze prisoners into fewer facilities and reducing sentences for nonviolent criminals. Now, with Republicans back in power on the state level and in Washington, the new prison-privatization fervor could bring back business once again. “Private prisons may be taking a bit of a hit right now, at least in the US,” says Chris Hartney, a senior fellow at the National Council on Crime and Delinquency, a nonprofit research and public policy organization. But this year’s state budgets could create an “uptick in privatization” if lawmakers succeed in passing such proposals, he adds.

Many of the proposals now under consideration would open prison management and sales up to competitive bidding, often requiring the companies to reduce costs by at least 5 percent. The private corrections industry has claimed it can save taxpayers anywhere between 5 and 15 percent a year, and supporters have cited recent studies to that effect. But critics contend that these promised savings are questionable at best. “If there’s cost savings, it usually comes in the form of something short-term, early on, and it fades over time,” says Travis Pratt, a criminology professor at Arizona State University who’s researched private prisons.

According to a 2007 study by the University of Utah, there isn’t much evidence to show that private prisons actually save any money. “Our conclusion is that prison privatization provides neither a clear advantage nor disadvantage compared to publicly managed prisons,” the researchers concluded.

In Florida, three recent cost-effectiveness studies of the state’s private prisons came up with similarly contradictory results. Likewise, Dr. Gerry Gaes, a former director of research at the federal Bureau of Prisons, told Policy Matters Ohio, a left-leaning think-tank: “Direct comparisons of cost and quality neither favor the public nor the private sector.”

Some studies even suggest that private prisons cost more than public ones. According to one 2010 report by the Arizona Department of Corrections, “[T]he cost of housing a medium-security inmate is $3 to $8 more per day in a private prison, depending on what assumptions are made about overhead costs to the state,” as the Arizona Republic reported.

Critics warn that more than dollars could be at stake, citing the industry’s spotty track record. In Mississippi, a class-action lawsuit on behalf of 13 inmates in a private facility claims that guards had sex with inmates, and that inadequate medical care and improper oversight led to one inmate suffering from brain damage. Last year, the GEO Group paid a $40 million settlement to the family of an inmate who was beaten to death in 2001 by fellow inmates while guards stood by in a Texas penitentiary.

“There are only so many places you can cut costs, places where you can save money, usually staffing and training,” says Arizona State’s Pratt. “That could present later security concerns. There’s nothing magical about privatization.”

So why would lawmakers embrace prison privatization, when it’s not even clear that it will save taxpayers money in the long run? Some blame the industry’s long-standing, cozy ties with lawmakers and aggressive lobbying. Ultimately, whatever the costs down the road, the upfront savings may be too tempting. “In fiscal emergencies, folks aren’t looking too far forward in terms of the true cost of privatization,” concludes NCCD’s Hartney.