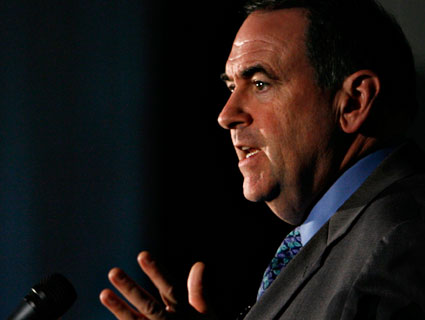 There’s a Mike Huckabee mystery that won’t go away.

Send a public records request seeking documents from his 12-year stint as Arkansas governor, as Mother Jones did recently, and an eyebrow-raising reply will come back: The records are unavailable, and the computer hard drives that once contained them were erased and physically destroyed by the Huckabee administration as the governor prepared to leave office and launch a presidential bid.

In 2007, during Huckabee’s campaign for the GOP presidential nomination, the issue of the eradicated hard drives surfaced briefly, but it was never fully examined, and key questions remain. Why had Huckabee gone to such great lengths to wipe out his own records? What ever happened to a backup collection that was provided to a Huckabee aide?

Huckabee is now considering another presidential run, and if he does enter the race, he would do so as a frontrunner. Which would make the case of the missing records all the more significant. These records would shed light on Huckabee’s governorship—and could provide insight into how a President Huckabee might run the country. Meanwhile, observers of Arkansas’ political scene—including one of Huckabee’s former GOP allies—say the episode is characteristic of a politician who was distrustful and secretive by nature.

In February, Mother Jones wrote to the office of Arkansas Gov. Mike Beebe seeking access to a variety of records concerning his predecessor’s tenure, including Huckabee’s travel records, calendars, call logs, and emails. Beebe’s chief legal counsel, Tim Gauger, replied in a letter that “former Governor Huckabee did not leave behind any hard-copies of the types of documents you seek. Moreover, at that time, all of the computers used by former Governor Huckabee and his staff had already been removed from the office and, as we understand it, the hard-drives in those computers had already been ‘cleaned’ and physically destroyed.”

He added, “In short, our office does not possess, does not have access to, and is not the custodian of any of the records you seek.”

“Huckabee just absolutely doesn’t trust anybody,” says one former high-ranking Arkansas Republican. “In my experience, if you don’t trust people, it’s because you’re not trustworthy.”

The person who may know the most about Huckabee’s records—or lack of them—is Jim Parsons. A self-described gadfly, Parsons is a former Green Beret turned good-government crusader who has filed dozens of Freedom of Information requests targeting Arkansas politicos on both sides of the aisle, including the Clintons. Shortly after Huckabee left office, Parsons went to battle with the state over his records.

In January 2007, Parsons requested “a copy of all information” on the Huckabee administration’s computers the day he left office. Beebe’s office provided Parsons with a January 9 memo addressed to Huckabee from the Arkansas Department of Information Systems, reporting that all of the gubernatorial hard drives had been “crushed under the supervision of a designee of [Huckabee’s] office.” That is, a Huckabee aide had made sure all this information was destroyed.

The memo included another tantalizing piece of information: The information stored on the drives had been saved on a backup, which was handed over to Huckabee’s then-chief of staff, Brenda Turner. The history of the Huckabee administration, then, was locked away, under the watchful eye of a former aide. What did she do with this information? Where is it now? Turner, who now runs the PR shop for a Arkansas-based purveyor of Christian-themed greeting cards, did not respond to repeated requests for comment. (Contacted via his political action committee, Huckabee didn’t respond to questions about his records.)

Parsons requested the backups and eventually filed a lawsuit against Huckabee and Beebe, alleging that the new governor had siphoned taxpayer money from an emergency fund to pay to replace the destroyed hard drives. Altogether, the new equipment cost over $335,000. Huckabee countered that the information on the hard drives included private details, such as social security numbers, that shouldn’t be released to the public. In the end, Parsons’ suit was dismissed—largely because he didn’t name Turner, who apparently possessed the records, as a plaintiff.

What do the Huckabee files hold? The records could provide details on any number of unsettled controversies involving a governor that faced at least 15 ethics complaints concerning, among other things: his failure to report gifts and outside income, his alleged use of state funds and resources for political and personal purposes, and the pardon of a convicted murderer and rapist who went on to kill again once released.

A former high-ranking Arkansas Republican who was once close to Huckabee and who requested anonymity told Mother Jones that the destruction of the hard drives puzzled him. “I don’t know what that was about, if they had things to hide or not,” he says. But, he adds, the episode fits with Huckabee’s general reticence when it comes to public disclosure. “Huckabee just absolutely doesn’t trust anybody. In my experience, if you don’t trust people, it’s because you’re not trustworthy. We see the world through our own eyes.”

Huckabee’s aversion to public disclosure extends beyond his gubernatorial papers. He and his handlers have also taken steps to block access to videotapes of his sermons, spanning his 12 years as a Southern Baptist minister before he entered politics. During the 2008 campaign, Mother Jones reported that Huckabee’s campaign had refused to make the sermons public—and that, according to an official at one of the churches he’d led, much of the archival material relating to Huckabee’s tenure had been destroyed.

Despite the opacity surrounding Huckabee’s political and pastoral record, he has at times fashioned himself as a staunch advocate of government transparency. Running for president in 2007, Huckabee put forth a bold open-government proposal. “There’s an old rule that says that when the sun shines, the germs disappear,” he said in one video clip (watch it below). “Well you know, frankly, there are a lot of germs in government.” So he proposed disclosing every federal government expenditure online within 24 hours. “You could find out exactly where every dollar of the federal budget goes, down to what it cost to mow the courthouse lawn in your hometown at a federal courthouse,” he said. Discussing this plan at the annual Conservative Political Action Conference (better known as CPAC) in February 2008, he said, “We should demand transparency and accountability from our government.”

Yet Huckabee’s calls for transparency did not extend to his own records. “There were twelve years of information there, of dealings of the executive branch,” marvels Jim Parsons, referring to the hard drives. “And that bit of history is just lost. I thought it was wrong, physically and financially and historically and educationally wrong to just destroy them.” He adds, “I probably would vote for him. It’s just that he did a bad thing there.”

Some of Huckabee’s gubernatorial papers do still exist, records that were selected by his office and handed over to his alma mater, Ouachita Baptist University. Due to funding hang-ups and other delays, a spokeswoman for the university says the records won’t be accessible to the public for another two years. That is, after the conclusion of the 2012 presidential contest.