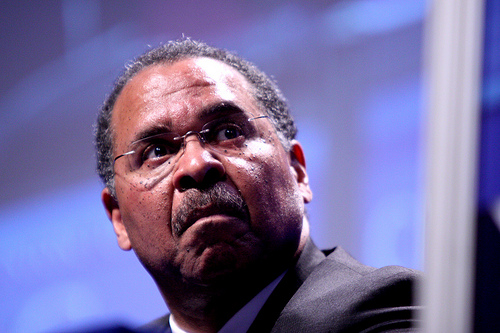 Remember Ken Blackwell? He was Ohio’s secretary of state in 2004 who was accused of throwing the presidential vote in that crucial swing state in favor of George W. Bush and overseeing “massive and unprecedented voter irregularities and anomalies” that disenfranchised tens of thousands of voters. Now Blackwell’s back—and he’s eyeing a place in the US Senate.

Roll Call reports today that Blackwell, who unsuccessfully ran for Ohio governor in 2006, has talked with the National Republican Senatorial Committee and Sen. Jim DeMint (R-SC), a heavy-hitter among Senate GOPers, about challenging Democrat Sherrod Brown in the 2012 election. Blackwell said he won’t make a final decision about his political future until after his forthcoming book, “Resurgent: How Constitutional Conservatism Can Save America,” comes out in late May.

There are plenty of reasons why Blackwell’s idea is a bad one. First, he’d be joining two other GOP contenders, among them Ohio Treasurer Josh Mandel. And Brown is fairly popular in Ohio. He handily defeated incumbent Sen. Mike DeWine in 2006 by 12 points, and in a recent survey by Public Policy Polling, Brown led all potential opponents by double digits. “Sherrod Brown appears to be in a much stronger position now than he was just three months ago,” said Dean Debnam, who heads Public Policy Polling.

Then, of course, there’s Blackwell’s 2004 debacle. An investigation by Rep. John Conyers (D-Mich.) and Democratic committee staff concluded that Ohio’s voting disaster in 2004 was “caused by intentional misconduct and illegal behavior, much of it involving Secretary of State J. Kenneth Blackwell.” Long lines, faulty voting machines, onerous barriers for voter registration, a rigged recount—anything that could go wrong in Ohio did on Election Day 2004.

Blackwell—now the Republican candidate for governor of Ohio—is well-known in the state as a fierce partisan eager to rise in the GOP. An outspoken leader of Ohio’s right-wing fundamentalists, he opposes abortion even in cases of rape and was the chief cheerleader for the anti-gay-marriage amendment that Republicans employed to spark turnout in rural counties. He has openly denounced Kerry as “an unapologetic liberal Democrat,” and during the 2004 election he used his official powers to disenfranchise hundreds of thousands of Ohio citizens in Democratic strongholds. In a ruling issued two weeks before the election, a federal judge rebuked Blackwell for seeking to ”accomplish the same result in Ohio in 2004 that occurred in Florida in 2000.”

“The secretary of state is supposed to administer elections—not throw them,” says Rep. Dennis Kucinich, a Democrat from Cleveland who has dealt with Blackwell for years. “The election in Ohio in 2004 stands out as an example of how, under color of law, a state election official can frustrate the exercise of the right to vote.”

The most extensive investigation of what happened in Ohio was conducted by Rep. John Conyers, the ranking Democrat on the House Judiciary Committee. Frustrated by his party’s failure to follow up on the widespread evidence of voter intimidation and fraud, Conyers and the committee’s minority staff held public hearings in Ohio, where they looked into more than 50,000 complaints from voters. In January 2005, Conyers issued a detailed report that outlined “massive and unprecedented voter irregularities and anomalies in Ohio.” The problems, the report concludes, were “caused by intentional misconduct and illegal behavior, much of it involving Secretary of State J. Kenneth Blackwell.”

“Blackwell made Katherine Harris look like a cupcake,” Conyers told me. “He saw his role as limiting the participation of Democratic voters. We had hearings in Columbus for two days. We could have stayed two weeks, the level of fury was so high. Thousands of people wanted to testify. Nothing like this had ever happened to them before.”

With a record like that, why even bother running? For the voters who were shut out by Blackwell and his cronies, I’ll bet the memory of 2004 still stings.