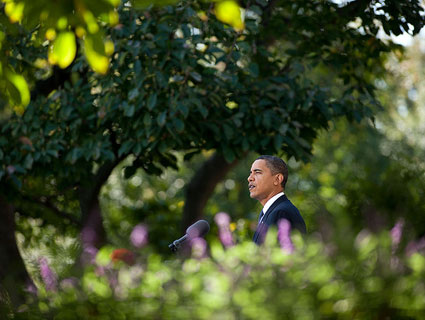 When the White House announced on the Sunday talk shows that President Obama would be giving a major speech on the deficit—responding to Rep. Paul Ryan’s drastic 2012 budget proposal—it came as news to more than just the viewership of Meet the Press. House Democrats were taken aback by the announcement that Obama would be making a big move to address the deficit this week, according to a House Democratic aide.

Many Congressional Democrats found out about Obama’s surprise speech by watching the Sunday shows, as top Obama aide David Plouffe made the rounds to note that the president would lay out a plan for long-term deficit reduction this week. “Plouffe’s announcement yesterday morning did leave us scrambling, that’s something we’re working on right now,” the House aide said on Monday.

House Democrats had already been preparing to release their own 2012 budget, under the leadership of Rep. Chris Van Hollen (D-Md.), the ranking Democrat on the budget committee. The House Dems’ budget plan had been in the works for weeks, as Van Hollen had been meeting with every major caucus in his party to craft an alternative to the Republicans’ plan. Last week, the GOP’s decision to push out Ryan’s plan to radically alter Medicare and Medicaid in the middle of the 2011 budget fight threw Democrats for a loop. Now the news of Obama’s speech has left Dems on Capitol Hill grappling with another unexpected turn of events that could force them to change their plans, as they won’t want to be too out of sync with whatever Obama proposes.

Last week, congressional Democrats successfully united behind the message that Ryan’s plan would “end Medicare as we know it”—an effective cudgel to use against the GOP. But as I explained last Tuesday, Ryan’s plan could also work against his opponents by baiting the Democrats to meet him halfway on a radical plan. Now liberals fear that Obama may be taking the GOP bait, as he vows to make his own reforms to Medicare and Medicaid—an approach that could put a split between the White House and Congressional Democrats on entitlement reform. Obama’s speech on Wednesday may end up playing well with centrist-minded independent voters, his target audience. But the timing seems to have unsettled members of his own party on Capitol Hill.