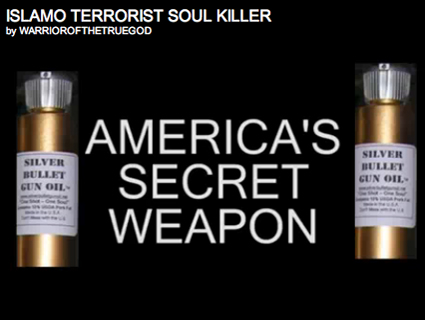 Image from video posted by <a href="http://www.youtube.com/watch?v=otXaqcOJOYs&feature=channel_video_title">WARRIOROFTHETRUEGOD</a>/YouTube

Did a Navy SEAL kill Osama Bin Laden with a pork-coated bullet, thus denying him entrance to paradise? That’s the highly unlikely claim coming from a shady website selling gun lubricants that it guarantees to be “13% USDA liquefied pig fat.”

According to the purveyor of Silver Bullet Gun Oil, the product is “a HIGHLY EFFECTIVE Counter-Islamic terrorist force multiplier.” Here’s why:

On his site, the anonymous figure behind Silver Bullet says his intentionally un-halal lube is quite popular among armed employees of the US government, stating that “Thousands of bottles of Silver Bullet Gun Oil have been distributed since July of 2004 by its creator to members of ALL U.S. Military branches.” He also claims that the gun oil is used in tank and helicopter weapon systems and that “a number” of air marshals use it as well. On a Marine message board, he asserts (along with some harsh racial epithets) that his gun oil is helping win the war on terror: “I’ve been putting out SBGO for 5 and 1/2 years. I pushed the Pork additive [13%] long enough for the rags to get the message, which according to those that are using it in their [area of operations] puts some real FEAR into these mutts.”

The Silver Bullet site includes photos of the oil “production line,” in which a masked man wearing a regulation Marine camouflage utility uniform (which are off-limits for civilians) loads boxes with bottles of oil, allegedly a shipment to Marines in Afghanistan’s Helmand Province. Members of the military are allowed to procure their own weaponry accessories such as gun oil. But any downrange service members who use pork-laden lubricant could conceivably be in violation of General Order 1 (PDF), the war-zone code of conduct that prohibits “proselytizing” and disrespecting local customs.

Silver Bullet’s seller, who also goes by the handles Midnite Rider and “Warrior of YAHWEH,” claims to be a former Marine scout sniper. Otherwise, he doesn’t identify himself and has concealed the registration data for his website. Of course, none of his claims about his product or its widespread use can be verified. The assertion that bin Laden was killed by a weapon using Silver Bullet Gun Oil is made in this promotional video, posted on YouTube by a user known as WARRIOROFTHETRUEGOD:

At best, Silver Bullet Gun Oil seems like snake oil for Islamophobes. At worst, it’s putting forth an image of American soldiers as crusading anti-Muslim killers—a distortion that could incite violence as quickly as Terry Jones’ Koran-burning or the military gunsight company that hid biblical messages on its equipment. A spokesman for the Army’s weapons-procurement command told the Southern Poverty Law Center’s Hatewatch blog that he was unfamiliar with Silver Bullet, “though he conceded that a soldier or Marine could theoretically purchase the oil on his or her own and use it on the battlefield.” The SPLC ordered some, and it came with a freebie: “a biography of a World War I American general who supposedly executed 49 Muslims in the Philippines with bullets soaked in pig’s blood.” That story has made the rounds on right-wing message boards since 9/11, and it’s been thoroughly debunked by scholars.

Silver Bullet’s claims of damnation for Muslims who are shot with pig fat-coated bullets are also shaky. Most Muslims, devout and secular, simply see pork as gross, and they don’t consider incidental (or forced) contact with porcine products to disqualify one from entrance to heaven. So much for “one shot, one soul.“