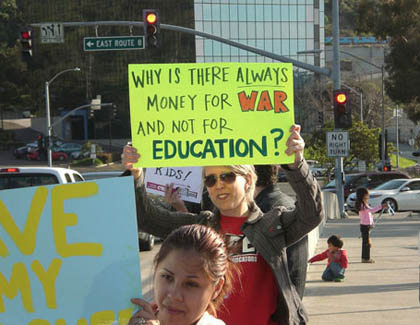 “We are not here to lobby. We’re here to raise some hell,” Betty Olson-Jones, president of the Oakland Education Association, told The Sacramento Bee this morning, as California Highway Patrol officers arrested 65 protesters in Sacramento today. Olson was there along with about 1,000 teachers, parents, and students to urge California lawmakers to pass a tax extension to avoid deeper cuts to education budgets around the state. California, which educates one in eight public school children in America, is staring down a $28 billion budgetary hole.

The protest in Sacramento—along with hundreds of other protests throughout the Golden State—was organized by the California Teachers Association as part of a weeklong “State of Emergency” campaign to stave off a third round of cuts to California’s schools. Tom Torlakson, the State Superintendent of Public Instruction, argued earlier this year that there’s no more meat on the bone. According to the non-partisan Legislative Analysts Office, per-student spending for California schools has dropped by 6.6 percent, or about $540 per student, over the past three years. California ranks close to the bottom when it comes to funding per student. Many of the state’s school districts have already cut teaching materials, increased class size, and cut teachers, nurses, counselors, and psychologists. Some teachers buy supplies with their own money, share tips for donation websites, and clip coupons together in staff rooms.

In San Francisco, more than 100 teachers marched by City Hall, chanting “close tax loopholes, not schools,” and “textbooks, not taxbreaks.” The San Francisco Unified School District sent out preliminary pink slips to 400 teachers, and other staff, including Steven Hankle, the choir director at Mission High. “We’ve made great progress in the last few years,” Mission High principal Eric Guthertz told me earlier this year. “I worry what the cuts will do to that.”

What will it take to stave off these cuts? California Teachers Association says that first, state legislators should extend some existing taxes immediately. And after that, Jerry Brown will continue to push legislators to agree to a special election that will ask voters for an additional tax hike on their purchases, cars, and income. A CBS poll in March found that the majority of Californians support a special election to let voters decide whether to extend tax increases to help close California’s massive budget deficit.