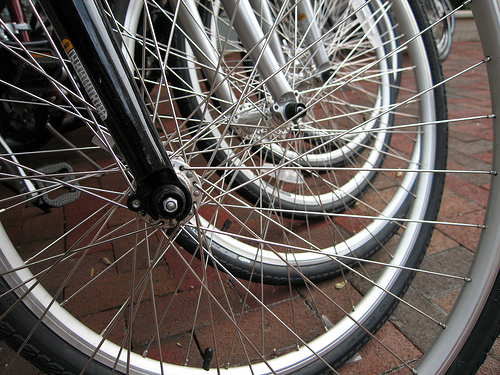 Offshore drilling won’t do much to ease the pain at the pump that a lot of Americans are experiencing today, despite what the debate in Washington might lead you to believe. But what could make it easier is giving people alternatives to driving that are economically appealing—like financial incentives for carpooling, public transit, and biking.

Rep. Earl Blumenauer (D-Ore.), the resident bike guru of the House, introduced legislation this week that would level the playing field on transit benefits. The “Commuter Relief Act” would set a uniform cap of $200 per month for transportation fringe benefits, which can be used however the commuter prefers, rather than offering a bigger tax break for drivers than for bus riders. I also makes the transportation benefits more flexible in other ways, letting people pick how they want to get to work without forfeiting the cash savings. It’s the only real way, says Blumenauer, of liberating Americans from high gas prices.

“Petroleum is going to become increasingly expensive. It’s going to be increasingly scarce,” he tells Mother Jones. “What we really need to do is give American consumers choices so they are not tethered to the gas pump quite as tightly.”

For years, federal policies have created incentives to drive to work alone. We subsidize driving by letting commuters use up to $230 of their pre-tax earnings for parking; only in the past two years, since the passage of the Recovery Act, have policies equalized the federal tax credits for mass transit and parking. Right now, the cap on transportation benefits is $230 for both cars and transit, but when the tax deal expires at the end of 2011, the public transit subsidy drops back down to $130. That extra $100 a month is certainly a perverse incentive to drive to work. Blumenauer’s bill would at least ensure that they remain equal.

Blumenauer’s bill would also require employers who provide free parking for employees to let anyone who doesn’t drive get the cash equivalent instead. That means employers would essentially end up paying you not to drive to work. His bill would also allow commuters to combine benefits, using some of that $200 to cover costs associated with biking (like maintence) and some for mass transit, as needed. This would be ideal for people who bike to a transit stop, or who bike most days and take public transit in inclement weather. The bill also creates a credit for people who use van-pools, and allows people who are self-employed to use the transportation benefit program, too.

“You ought to be able to pick and choose what makes sense for you,” says the lawmaker, now in his eighth term representing Portland. He’s biked to work every day on the Hill since coming to Washington, and is often found sporting a bright plastic bicycle button. “In 15 years in Congress, I’ve never been stuck in traffic. I’ve never been unable to find a parking space,” he says. “And I’ve burned hundreds of thousands of calories instead of gallons of fossil fuels.”

When Congress resumes fighting over offshore drilling again next week, it would be nice to hear more about programs that really could help Americans deal with soaring gas prices.