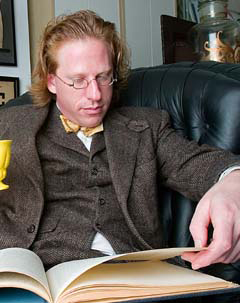 Jonathon Keats. Photo: Akim AginskyTwo weeks ago, my longtime partner Mike and I became the first couple in the universe to get entangled. This wasn’t some pseudo-marriage, engagement, or commitment—entanglement is much bigger than that. It is the most progressive, state-and-church-free alternative to marriage.

“Quantum Entanglement” is the latest cross-disciplinary invention of the San Francisco-based experimental philosopher and writer Jonathon Keats. His rigorously tested apparatus, previously only used by scientists in military cryptography, applies the principles of quantum physics to the irrational realm of human relations.

It requires no contracts, no paperwork, and no loads of cash. There are no restrictions on who may be entangled to whom. “After 5,000 years of man-made laws, often exclusionary or punitive, science promises to liberate marriage through technology freely offering entanglement to everybody,” Keats argues. There is absolutely nothing anti-gay-marriage legislators or church officials in your state can do about this. How does it work? Keats’ apparatus uses photons (i.e., light) to conjoin subatomic particles such as electrons to each other. “When two or more particles are entangled, they behave as if they were one and the same. Any change to one instantaneously and identically changes those entangled with it even if they’re a universe apart,” he explains. “Just try doing that in a marriage contract.” 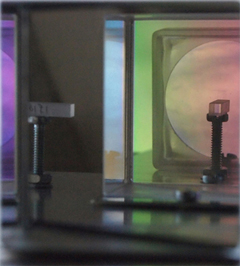 I first met Keats five years ago at the San Francisco Art Institute where he shocked my atheist partner and others in the audience with his and some UC Berkeley scientists’ attempt to genetically engineer God through discovering Her DNA. Next time we saw Keats, he was mucking in the dirt at the Yerba Buena Center for the Arts dressed in a three-piece tweed suit, looking like what one person described as “Al Capone’s accountant.” Keats was installing the “The Honeybee Ballet” project, where he timed the blooming of plants in different parts of the city, choreographing the movements of unsuspecting bees who pollinated in the elite museum spaces that traditionally exclude insects, dogs and all cats. Keats then briefly dabbled in amateur filmmaking producing porn for plants, and it appears this phase was the most lucrative of his career. About a month ago, he launched a gourmet restaurant for plants in Sacramento’s Crocker Art Museum.

A few weeks ago, Keats’ wife, Silvia Pareschi, invited us over for plant-inspired risotto. As Mike lamented my increasing weekend hours reporting on students and teachers, Keats revealed his latest invention as a possible cure for “too much work.” He pulled out a small, elegant metal and glass apparatus that he set on the dining table, and we moved our chairs closer next to each other. The light hit the machine just right, our electrons started to conjoin (metaphorically, because there was no sunlight that day), and Mike made an inappropriate joke. We held our hands and made promises to spend more time together. Then Silvia poured us another glass of wine. It was the easiest commitment I’d ever made.

Still confused? Check out this video with Keats explaining how the apparatus works.

Entanglements are available in New York from May 12 to July 30 at the AC Institute. More cities to come soon.