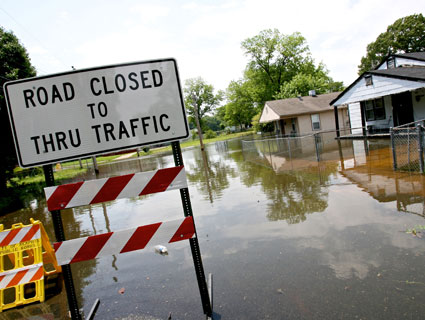 Several homes sit in a neighborhood flooded by rivers that lead off of the Mississippi river in north Memphis. The river is expected to reach record levels tonight in the Memphis area as over one thousand across the area have left their homes due to fear of flooding.Dan Anderson/Zuma

The Midwest and the South are once again in the middle of record floods. The mighty Mississippi River is now six times its normal size and police have evacuated parts of Memphis as the river crested overnight just shy of 48 feet.

It neared, but didn’t reach, the record of 48.7 feet set there in 1937. The water levels are expected to break records in other parts of the region set in two major floods of the past century, in 1927 and 1937. While Memphis is experiencing the brunt of it right now, the flood crest is expected to “move slowly downstream towards New Orleans during the next three weeks,” according to the National Weather Service, and will likely also impact southern tributaries like the White River, the Arkansas River, and Big Black River, among others.

Here are answers to a few common questions about the flood:

What caused the flooding?

The 2,320-mile-long Mississippi drains approximately 41 percent of the continental US. A lot of snow in the upper Midwest this winter and an extremely wet April—where up to four times the normal amount of rain fell in some parts of the region—compounded to overflow the banks of the river.

How many people are affected?

Bloomberg reports that 3,075 buildings, 949 homes and 12 apartment complexes are affected in just Shelby County, Tenn., home to Memphis. As Jeff Master’s writes over on WunderBlog, these are the highest water levels on record for the 70-mile stretch between Missouri and Tennessee. As the crest moves south, many more towns may be affected, including New Orleans. Here’s what the Mississippi looks like now, as it has expanded to up to 3 miles wide at some points: 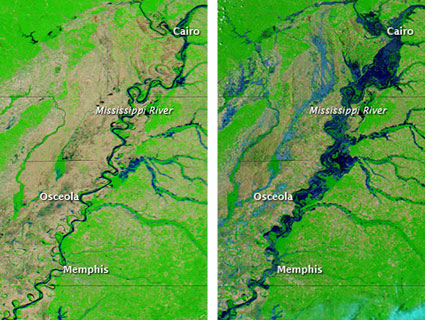 Images of the Mississippi River, before and after the flooding: NASA Earth Observatory

What are they doing to protect towns and cities?

The Army Corps already breached levees to protect Cairo, Ill. They have also opened floodgates on the Bonnet Carre spillway near New Orleans to try to divert some of the water and may open others. The Army Corps released a map on Monday showing the estimated inundation areas for Louisiana.

Does climate change have anything to do with this?

Most scientists will urge caution in saying that any particular weather event is directly “caused” by climate change. However, increases in both snow and rain are tied to climate change. The melting snow from the winter and torrential downpours this spring have overwhelmed the river. Scientists say that we can expect more floods in the US and around the world as the planet gets warmer. The US Global Change Research Program has warned of more extreme events like heavy downpours in Midwest in the future as the climate changes. Treehugger has more on this subject.

Is this as bad as the Great Mississippi Flood of 1927?

The 1927 flood is often referred to as the worst in US history. It impacted seven states in an area of 27,000 square miles and destroyed 130,000 homes, as a local paper recently recalled. It also killed 246 people and displaced hundreds of thousands more. The damage would have totaled $1.5 billion at today’s prices, according to the Corps. Infrastructure and transportation have improved substantially since then, as have the early-warning systems that allow people to evacuate, which makes helps limit the damage for this latest flood. Reuters has more historic floods in the region.

This term is used colloquially to refer to major floods, but most people don’t really know what it means. The US Geological Survey explains:

The term “100-year flood” is misleading because it leads people to believe that it happens only once every 100 years. The truth is that an uncommonly big flood can happen any year. The term “100-year flood” is really a statistical designation, and there is a 1-in-100 chance that a flood this size will happen during any year. Perhaps a better term would be the “1-in-100 chance flood.”