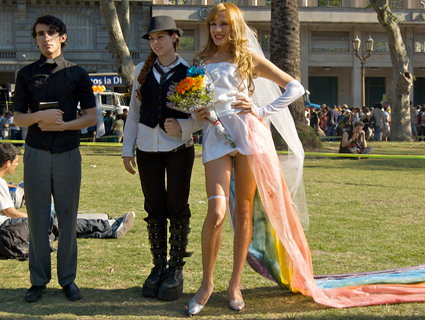 The military establishment, it appears, is willing to drag congressional Republicans kicking and screaming into the post-Don’t Ask, Don’t Tell era. The US Navy has authorized its chaplains to perform same-sex marriages on military bases in states that legally recognize such unions. That news came in a memo from the service’s head chaplain (PDF), dated April 13:

Consistent with the tenets of his or her religious organization, a chaplain may officiate a same-sex, civil marriage: if it is conducted in accordance with a state that permits same-sex marriage or union; and if that chaplain is, according to the applicable state and local laws, otherwise fully certified to officiate that state’s marriages…if the base is located in a state where same-sex marriage is legal, then base facilities may normally be used to celebrate the marriage. This is true for purely religious services (e.g., a chaplain blessing a union) or a traditional wedding (e.g., a chaplain both blessing and conducting the ceremony).

The policy’s unlikely to have a significant impact on gay or military communities: There’s no naval base, for example, in Iowa, one of five states (along with the District of Columbia) that recognize same-sex marriages. And until the DADT repeal is certified by the Pentagon, no service members are likely to be hitching up at the Washington Navy Yard. Not only that, chaplains who disagree with gay marriage on theological grounds are under no obligation to perform the ceremonies, which shrinks the pool of willing wedding officiators to virtually nil.

But there’s symbolic power in the policy change—enough to get a rise out of social conservatives. “This new guidance from the Navy clearly violates the law,” said Rep. Todd Akin (R-Mo.) who serves on the House Armed Services Committee and has no problem citing chapter and verse of the Defense of Marriage Act, even as he stumbles over the Pledge of Allegiance and says the Thanksgiving pilgrims fought “unbiblical” socialism. “While our president may not like this law, it is unbelievable that our Navy would issue guidance that clearly violates this law. While a state may legalize same-sex marriage, federal property and federal employees, like Navy chaplains, should not be used to perform marriages that are not recognized by federal law.”

Another House Armed Services Republican, Duncan Hunter of California, called the Navy’s move a “good example of the type of uncertainty and confusion created in the rush to change the previous policy.” Mind you, Hunter was less conflicted about advocating a confusing change in policy last year, when he called for the summary deportation of children born in the US to undocumented immigrants.

“You can look and say, ‘You’re a mean guy. That’s a mean thing to do. That’s not a humanitarian thing to do,'” he said back then.

It’s a talking point he and his GOP cohorts may find themselves repeating quite a bit on gay rights, as well.