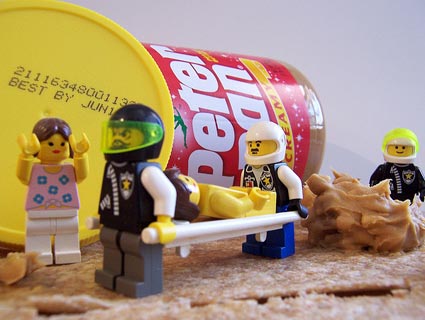 Growing up in the ’80s and ’90s, I was the only kid I knew who was allergic to nuts. I remember explaining to a skeptical teacher why I couldn’t eat the walnut brownies she’d brought for us one day. “But how do you know you won’t like them if you won’t even try?” she asked. Times have changed. You’d be hard pressed to find a gradeschool teacher now who wasn’t well versed in EpiPens and anaphylactic shock; some school cafeterias are now nut-free zones. Indeed, nut allergies are on the rise. Last May, researchers at the Mt. Sinai School of Medicine found that the rate of childhood peanut allergy had more than tripled in recent years, up from .4 percent in 1997 to 1.4 percent in 2008.

No one is quite sure why allergies are becoming more common. One theory called the hygiene hypothesis speculates that the environment in developed countries is actually too clean: Since children no longer encounter the full array of germs and parasites they once did, their immune systems instead busy themselves reacting to pollens, molds, and certain proteins in foods. (In developing countries allergy rates are vanishingly tiny.) The allergy onslaught has also been linked to climate change; immunologists have long connected the rise in hay fever cases to global warming, and in 2008 an Ausrtralian researcher suggested (PDF) that climbing temperatures could be making certain foods more allergenic as well.

When I was diagnosed with nut allergies as a baby, my parents were told there wasn’t much they could do about it, short of keeping me away from the offending foods and carrying an epinephrine shot in case I accidentally ate something nutty and developed an anaphylactic reaction. But in the past few years, pioneering immunologists have been experimenting with a new therapy for nut-allergic kids. Called oral immunotherapy or desensitization, it exposes patients to gradually increasing doses of nuts, with the aim of increasing their tolerance. The results so far have been promising. In the first study of the technique at Duke University, five out of seven participants were able to tolerate eating the equivalent of 13 peanuts by the end of the roughly two-year trial. Subsequent studies of other nuts, eggs, and milk, have shown similarly positive outcomes.

So will allergic kids soon be able to shed their EpiPens and MedicAlert bracelets? And will I get to order pad thai without all my friends chorusing to the poor waitress, “No nuts please!”?

For the inside scoop, I spoke with Dr. Jeffrey Factor, who runs the New England Food Allergy Treatment Center, an oral immunotherapy clinic in West Hartford, Connecticut. Since last November, Factor has been treating 40 peanut allergy sufferers between the ages of 5 and 20. Here’s what the process entails: On the first day, the patient comes into the clinic and ingests a minuscule amount of peanut flour (while hooked up to an IV so that epinephrine can be administered if needed). The dose of peanut flour is increased every half hour until it reaches 6 miligrams of peanut protein. Then, at home, over the course of the next two weeks, the patient takes a daily dose of 6 miligrams of peanut flour mixed into applesauce or pudding. After that, he or she comes in for a “dose escalation,” so the clinic staff can monitor for reactions. The process repeats, with gradually increasing doses, for 20-24 weeks, at which point most patients reach the equivalent protein of 2-3 peanuts.

So far, the results have been encouraging: Some patients have progressed more slowly than others, but several are one or two doses away from being able to tolerate 2-3 peanuts. Factor hasn’t had to treat any of the patients with epinephrine or drop anyone from the study because of systemic reactions. Still, he’s careful to note that even the patients who reach the maintenance dose are still advised to avoid peanuts. Their allergies are not cured, just better controlled.

A few caveats: Since the therapy isn’t covered by insurance it costs patients a whopping $5,000 out of pocket. Plus, so far, the trials have been limited to children. Factor, who is himself allergic to tree nuts, would like to see the therapy expanded to adults in the near future. But even if it is, it’s unlikely that I’ll ever be able to skip the “Are there nuts in that?” part of dining out. “The goal is not a cure,” he says. “The goal is peace of mind about reactions.” Peace of mind might not taste as good as pad thai, but you know what? I’d probably take it.

Correction appended: An earlier version of this story stated that patients received peanut flour through an IV on the first day of treatment. Actually, all peanut flour is ingested orally. We regret the error.