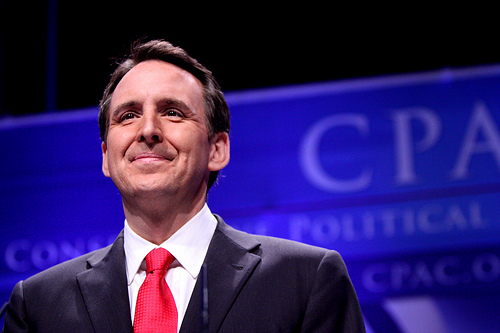 Former Minnesota Gov. Tim Pawlenty has struggled to distance himself from his old, reality based views on climate change.<a href="http://www.flickr.com/photos/gageskidmore/5449124047/sizes/m/in/photostream/">Gage Skidmore</a>/Flickr

Thursday night’s Republican debate was worth watching if only to see Tim Pawlenty try to talk his way around his previous support for efforts to cut planet-warming emissions. As governor of Minnesota, Pawlenty not only acknowledged that climate change is a problem, but also endorsed a cap-and-trade plan to deal with it. That makes him something of a pariah among other Republicans these days.

In a very “This is Your Life” moment, the Fox debate hosts replayed a 2007 ad that Pawlenty recorded for the Environmental Defense Fund in which he argues for cap and trade as a solution for climate change. When asked to discuss the ad, Pawlenty abashedly replied, “Do we have to?”

After trying to explain that he didn’t actually support cap and trade policy as governor—he just supported the “study” of it—Pawlenty decided to try apologizing:

“I’ve said I was wrong. It was a mistake, and I’m sorry,” Mr. Pawlenty told the Fox television audience, presumably filled with potential Republican primary voters. “You’re going to have a few clunkers in your record, and we all do, and that’s one of mine. I just admit it. I don’t try to duck it, bob it, weave it, try to explain it away. I’m just telling you, I made a mistake.”

Pawlenty has apologized for this before. In March, he told conservative talk show host Laura Ingraham that his support for cap-and-trade was a mistake and pointed to other Republican 2012 hopefuls who made similar “mistakes.”

Pawlenty’s flip-flop on climate is probably the most damning among the viable contenders for 2012. He formed the Minnesota Climate Change Advisory Group as governor to study the impacts of global warming and make policy recommendations. (He later ignored those recommendations.) He was also at the forefront of the effort to get the Midwest Governors Association to sign onto the Midwestern Regional Greenhouse Gas Reduction Accord. He was even best buddies with a famed Arctic explorer and climate activist.

Pawlenty has been trying to talk his way out of all this ever since he signaled he is running for the Republican nomination. Last night probably didn’t do much to end the questions. Pawlenty will be dealing with this for some time to come.